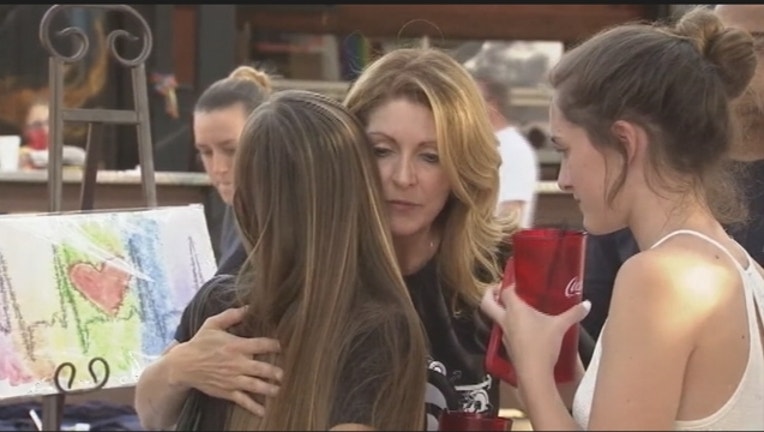 ORLANDO, Fla. (AP) - It is an early June morning, waves of heat already rising off Orange Avenue, as a 40-ish Orlando woman winds her way around the interim memorial at the former Pulse nightclub, taking in the photos and mementos and reading the names of the dead.

Though they are strangers to her, she begins to weep.

Barbara Poma, the club's co-founder and matriarch, who happens to be there on this morning, slowly approaches to talk and offer comfort.

"Every time I go, I see people like that," she says later. "Some are there for the first time; some have been there many times. But it is always emotional."

Three years after the June 12, 2016, mass shooting - at the time, the worst in modern U.S. history - the site still holds a powerful draw for the mourning and the curious. But for Poma, now charged with shaping the memorial and museum scheduled to open here in another three years, it also brings a sense of duty.

One question she doesn't indulge is: Why? Why her happy little dance club, which so many considered a place of acceptance and escapism?

"The whys are a very difficult, slippery slope," she says. "I feel like if I start asking those questions, it will take me to a place I don't want to be. The question is really: Why anybody? Why the 49 mothers? Why did they have to lose their children? Why were the survivors made to change the whole trajectory of their lives? Why is our society the way it is right now?"

Poma had helped to open the club in 2004 in memory of her older brother, John, who died after a long battle with AIDS in 1991. She used it to host fundraisers for Make-A-Wish and LGBTQ civil rights and breast cancer awareness.

Today she is CEO of the onePULSE Foundation, the nonprofit trying to raise $50 million for the design, land purchase, construction, maintenance, educational programming and the 49 annual college scholarships her organization envisions.

So far, the foundation has $14 million - most of it from Orange County - a staff of eight and some big-name board members, including entertainer Lance Bass and Walt Disney World President George Kalogridis.

"It's a ways to go," Poma says. "I hear people say, 'Wasn't there $30-some million already raised?' And I tell them, 'Yes, and every one of those dollars went exactly where it was supposed to - to the survivors and the family members."

But even as she works on the memorial plans, Poma and her husband, Rosario, are battling a lawsuit filed on behalf of survivors and victims' family members. The suit initially claimed the club was negligent because it did not have proper security or staff to prevent the shooting. Last month, an amended suit also alleged that the couple fraudulently transferred ownership of the Pulse property after the shooting to hide its value from those suing.

"Since the tragedy, we, like others directly impacted by this unimaginable act of violence, have been targeted by out-of-state personal injury lawyers pursuing us in this frivolous case," she told the Sentinel in an email. "To question my intent or motives based on the mistaken assumptions, suggestions or speculation of others who have no knowledge of our circumstances or of our character is misplaced and unjustified."

Brandon Wolf, who survived the attack but lost two close friends in the shooting, says he has faith in Poma and her team working on the memorial.

"I love her vision," he says. "I love the idea of creating a large community space where we all can come to mourn, love, learn and celebrate with each other in a way that embodies what Orlando has become since Pulse."

Late last month, a selection committee sorted through design pitches from 68 teams of architects, landscape architects and artists from 19 countries to compile a short list of six. Three of them are from the United States, the others from France, Ireland and the Netherlands.

Their works include the Diana, Princess of Wales Memorial Fountain in London and the Louvre Abu Dhabi, the largest art museum in the Arabian Peninsula.

Each had to write why the team wanted the project.

"There were some letters that you just cried through," Poma says. "You just saw how much it meant - even from 19 other countries - to be involved."

Rene Gonzalez, a Miami architect, was one of them.

"As a Florida architect and as a Latino gay man, this project may be the most meaningful of my career," he says. "What happened in Orlando struck very close to home. It could have been me - or any of my friends. It seemed so backwards, that here was a place of joy, a place of dance, a place that was uplifting ."

He is now among the six finalists, charged with creating a memorial that is "iconic, somber, serene, sublime and welcoming," as well as a museum that will house 7,000 artifacts from the nightclub and the aftermath of the tragedy, and a "Survivors Walk" that will connect the nightclub site to the Orlando Health Memorial Paver Garden along Lake Beauty and extend north to the Dr. Phillips Center for the Performing Arts.

"This pathway represents a continuation of the journey from hate to remembrance and hope," the foundation told applicants.

A winning design will be chosen by the end of October, Poma says. The project is expected to open in June 2022.

"It has been an emotional journey," Poma says. "It has been a roller coaster. And some days the dips are lower than others, and some days the peaks are higher - and some days it's out of control. What I do know is that it is the work of the foundation, and all this effort, that really gets me out of bed every single day. I know that even in my darkest moments, when I'm the saddest and feeling the loneliest, it really is coming here and doing this that makes me function."

As she was planning for the three-year remembrance, to be held at the interim memorial Wednesday night, President Donald Trump announced he would come to downtown Orlando six days later, on the heels of a week of vigils, prayers and remembrance.

Trump's predecessor, Barack Obama, famously visited one of the makeshift memorials in 2016, laying a bouquet of roses for the dead. Presidential candidate Hillary Clinton visited, too. No one has indicated President Trump has any such plans, but Poma says the door is open.

"The timing (of Trump's visit) is terrible," she says. "But the longer we keep saying, 'I unfriend you, I don't want to see you because you have different beliefs than I do,' you really aren't going to make any progress. I always believe if you could have a conversation, maybe you can plant one seed, and if that seed grows - even if it takes a long, long time - that's the only way you're ever going to open someone's heart."