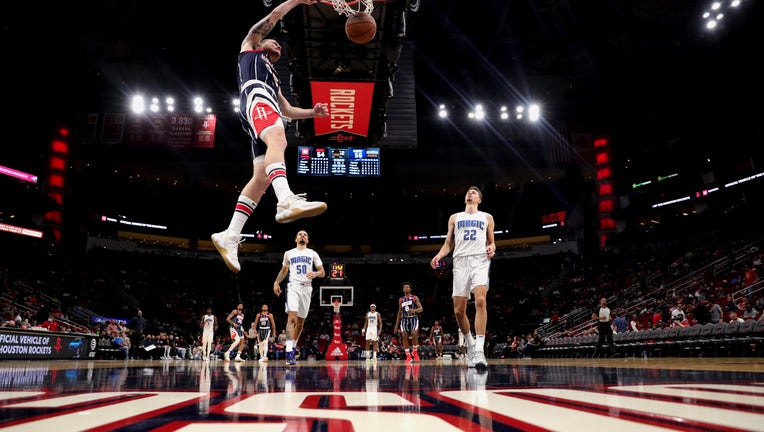 HOUSTON, TEXAS - DECEMBER 03: Garrison Mathews #25 of the Houston Rockets dunks the ball during the second half against the Orlando Magic at Toyota Center on December 03, 2021 in Houston, Texas. NOTE TO USER: User expressly acknowledges and agrees th

Stephen Curry keeps letting it fly from any spot on the floor, and he’s suddenly within striking distance of overtaking Ray Allen as the NBA’s all-time leader in made 3-pointers.

Curry had seven more 3s on the way to 31 points and eight assists, Andrew Wiggins hit a career-high eight 3s and finished with 28 points, and the Golden State Warriors beat the Orlando Magic 126-95 on Monday night.

He’s got the count in his head, of course he does — with admiration for the similar way Allen worked on his craft that Curry got to see up close attending Bucks shootarounds with his NBA-playing father, Dell, a teammate of Allen’s in Milwaukee.

"I know what the situation is, yeah," Curry said, smiling. "I always just play the game but obviously know I’m closing in. But try not to let it creep in to how you play and just enjoy the journey to get there ’cause it does mean a lot to me as I do get closer. ... I’ll talk about it when it happens."

Might he pull it off Wednesday night against Portland before the Warriors hit the road again? Coach Steve Kerr isn’t putting that past the NBA’s reigning scoring champ and two-time MVP, saying it "absolutely" could happen.

Before the game, after his dazzling, must-see pregame routine, Curry heaved a full-court shot from the far tunnel in Chase Center and just missed.

Wiggins scored 17 of his points in the third quarter, knocking down three straight 3s over a span of 1:14. He finished 9 of 17 from the floor to help Golden State bounce back from having its 11-game home winning streak snapped in a 112-107 loss Saturday night to San Antonio.

Jordan Poole struggled to find his shot, going 4 of 15 for 12 points and contributing seven assists and seven rebounds.

Gary Harris scored 17 points to lead the Magic, who lost for the ninth time in 10 games.

Cole Anthony had a tough sequence late in the second when he committed a loose ball foul, turnover then was whistled for a technical that allowed Curry to score five unanswered points – a 3-pointer and a pair of free throws for the technical.

That burst helped the Warriors build a 65-44 lead at the break and they kept pushing in the third. Nemanja Bjelica added 10 points off the bench.

Even Bjelica finds himself stealing a glance of Curry working before games since they are together for pregame warmups.

"He’s the best shooter ever," Bjelica said. "I’m happy I can watch it in person. He’s amazing."