ORLANDO, Fla. - As the 50th anniversary of the Walt Disney World Resort approaches, we’re taking a look back at history and the transformation of the iconic Cinderella Castle at Magic Kingdom.

Construction of Walt Disney World’s first park, Magic Kingdom, began on May 30th, 1967. At the center was the 189-foot tall Cinderella Castle, originally painted in grey, blue, and gold.

Prior to its completion, guests who visited the Walt Disney World Preview Center reportedly could see what the castle would look like through Herb Ryman’s rendering of the structure. In addition, a model of its original design was on display in the preview center’s lobby. 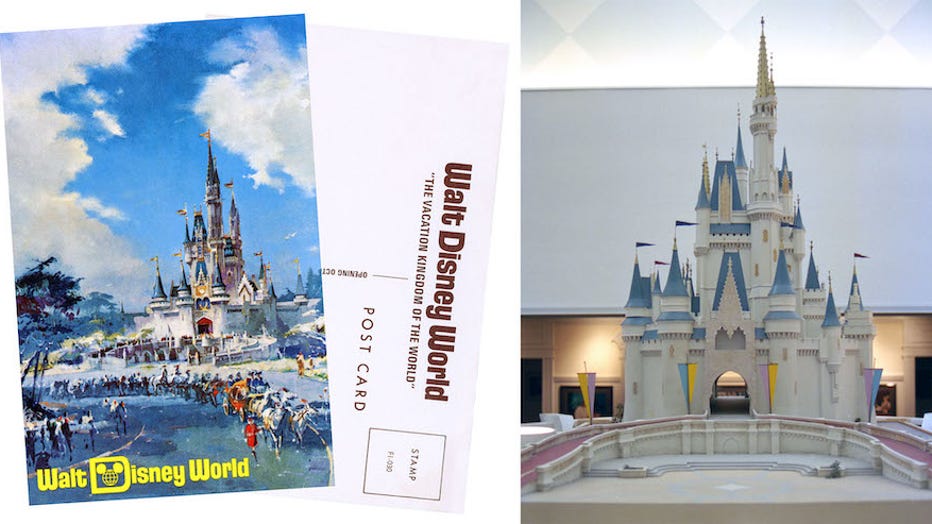 Disney said that the castle took about 18 months to build, coming to completion in July 1971. The structure is composed of concrete, steel, cement, plaster, and fiberglass. Not a single brick was used in its construction. 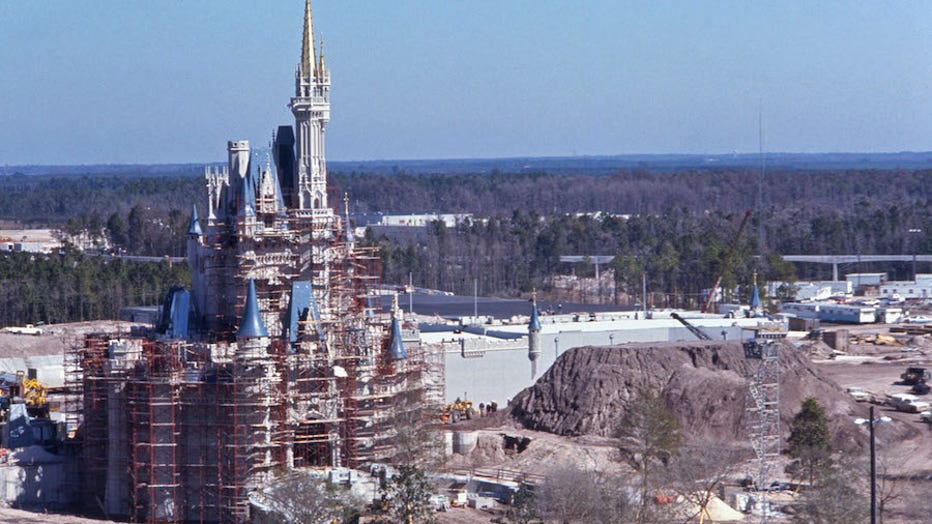 In early photos of the Cinderella Castle, 13 gargoyles can be spotted on its outside. There are also 18 towers with corresponding spires. 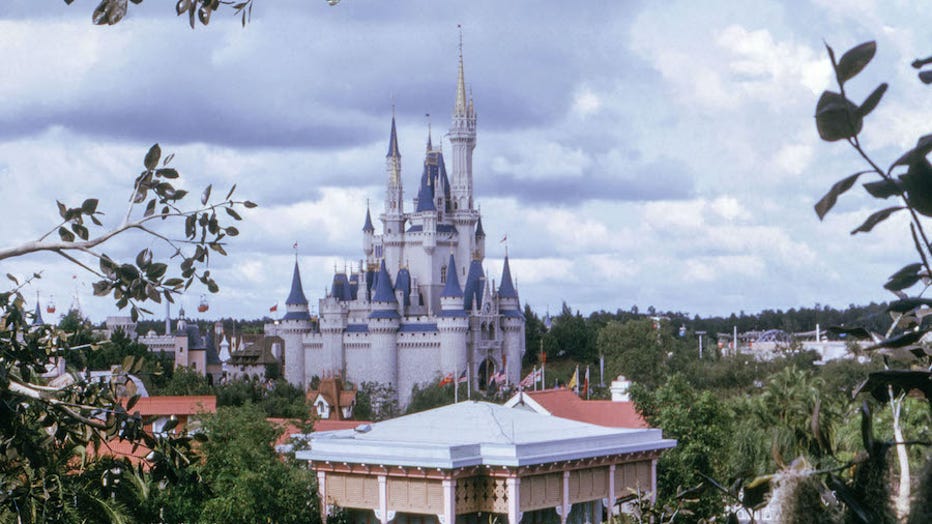 Taken in 1974 (Photo from DisneyParks Blog) 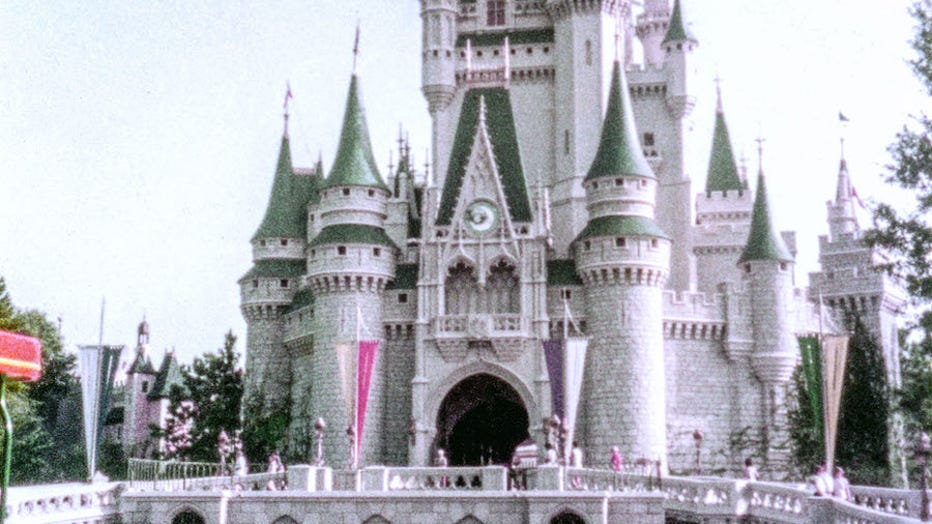 Over the last 50 years, the royal castle has taken on many different looks.

For example, in 1996, the Cinderella Castle was turned into a birthday cake for Walt Disney World’s 25th anniversary. Disney said that the cake weighed in at about 40 million pounds, utilizing 55,040 tablespoons of pink paint in three different shades. It also had 50 gumballs, 30 lollipops, 4 Life Savers, 12 gumdrops, 16 red candy hearts, and 16 green candy stars on it. 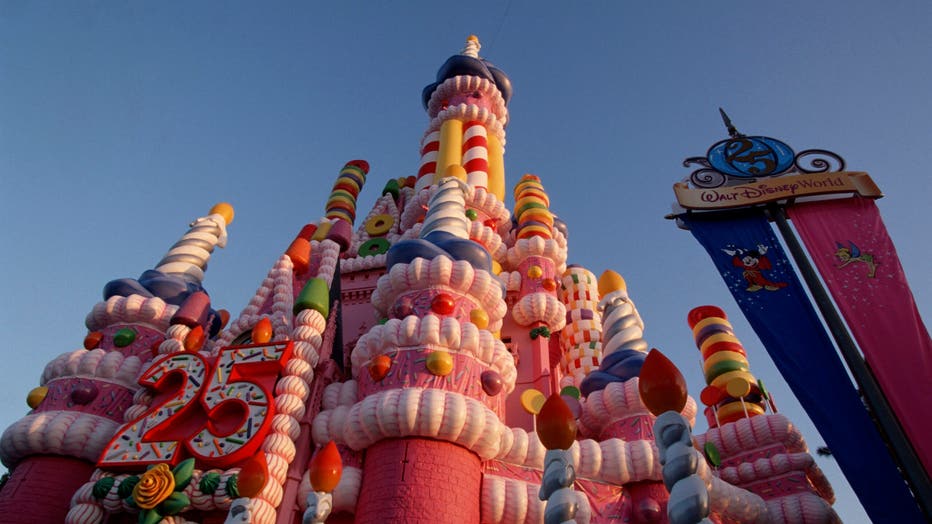 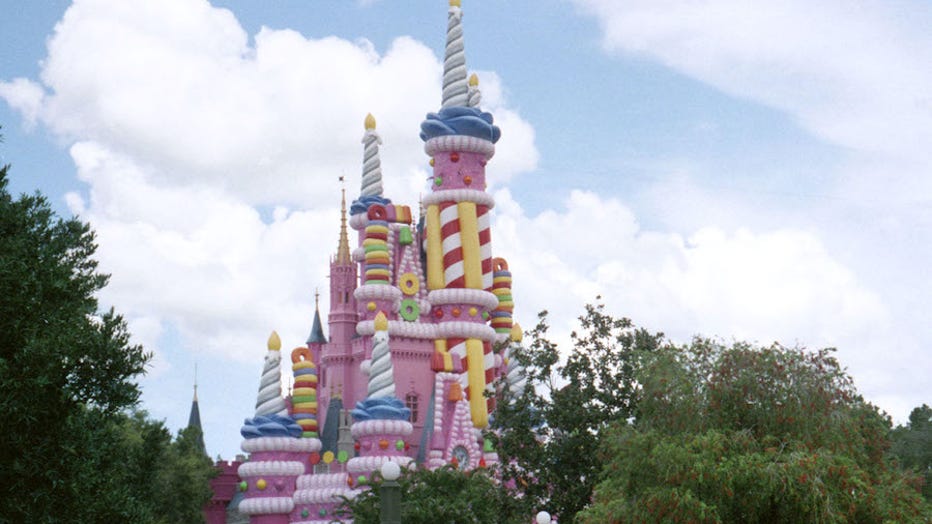 In 2005, the castle was decorated for Disneyland Resort’s milestone anniversary with gold accents and a massive stained glass magic mirror that rotated with images of castles from Disney theme parks around the world. 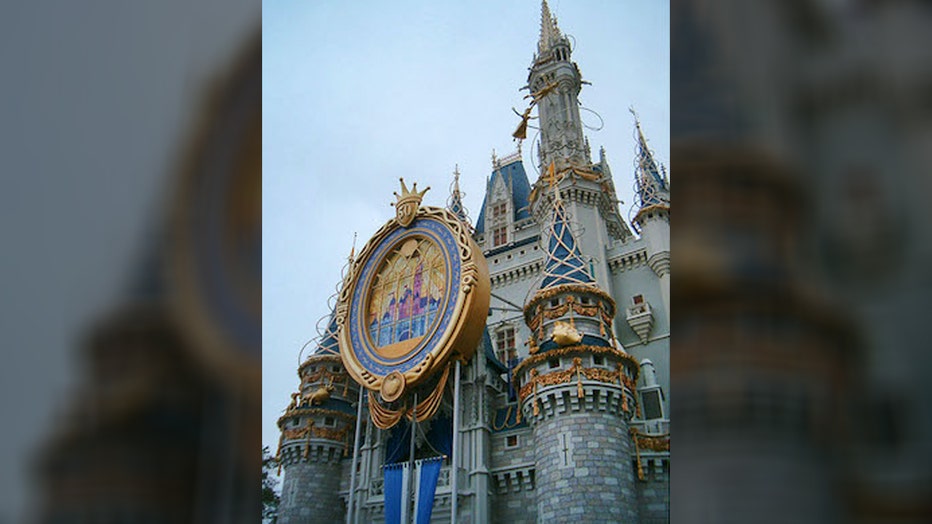 For the holidays in the late 2000s, Disney said that castle looked as if it was "dipped in sugar," featuring thousands of LED lights. 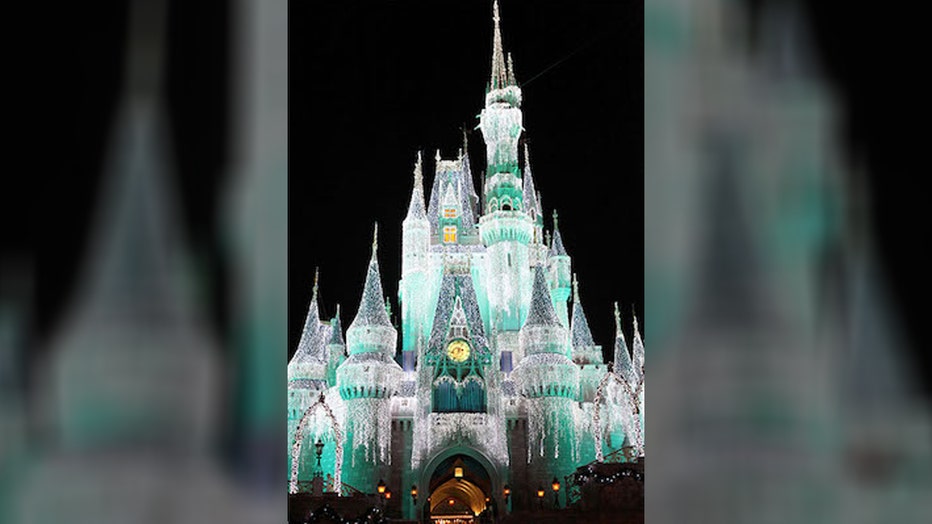 The Cinderella Castle has undergone an ‘EARidescent’ renovation for Walt Disney World’s upcoming 50th anniversary celebration, dubbed ’The World’s Most Magical Celebration.’ After months of work, the castle now has a new color and decor. For instance, jewels and royal blue ribbons adorn the castle as gold draping and turrets surround its towers.

"The entire castle will shimmer with pearls and jewels, and the turrets and towers will be wrapped in iridescent gold and royal blue ribbons," George Adams of Walt Disney Imagineering previously said. "Above the castle gate, a 50th-anniversary crest will warmly welcome guests to join the festivities." 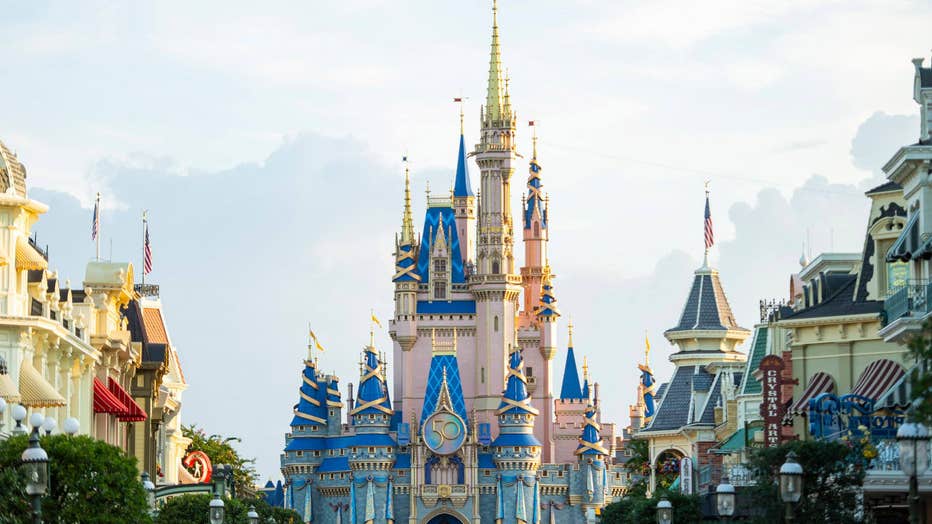 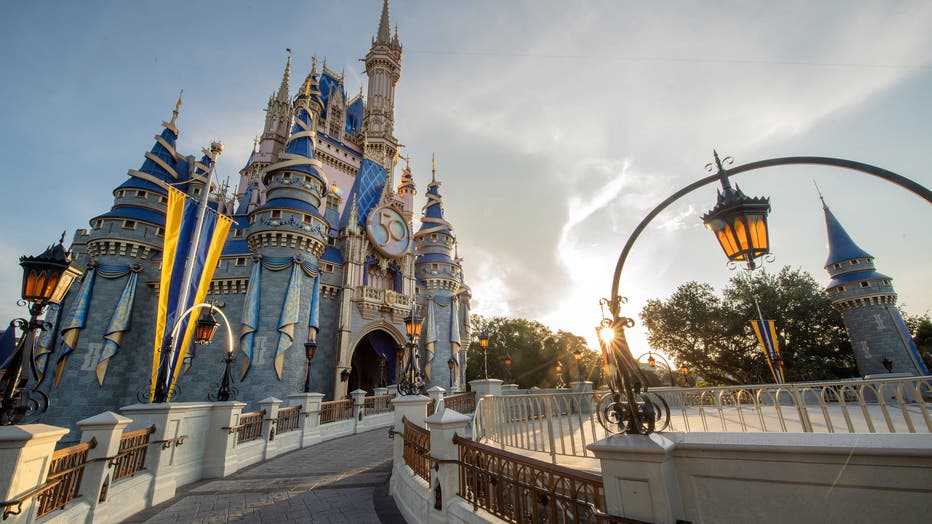 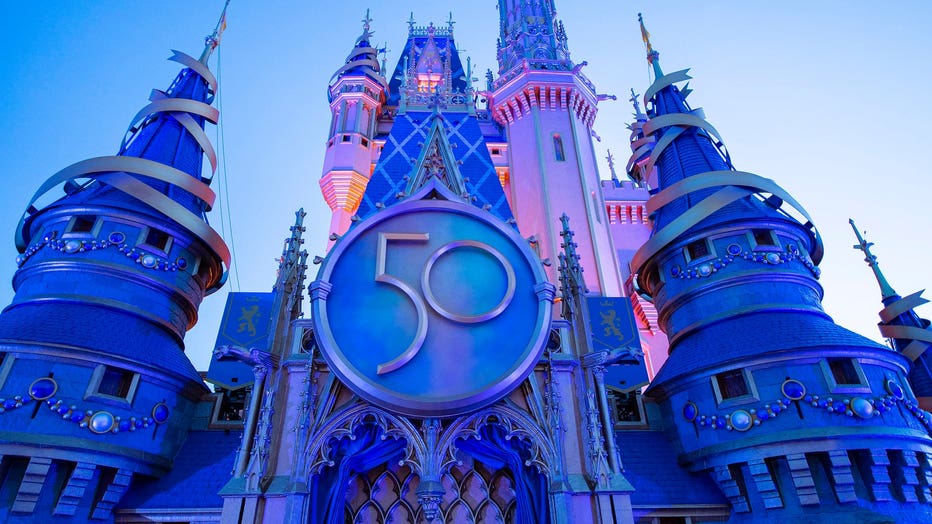 During the anniversary festivities, the castle will illuminate Magic Kingdom at night with lighting enhancements, creating "a dazzling radiance that sparkles with pixie dust," Disney added.

The World’s Most Magical Celebration will officially begin on October 1st, 2021, as Magic Kingdom opened to the public on that day in 1971. The Cinderella Castle will serve as the centerpiece of the magic but new experiences will debut throughout all four parks over the celebration’s 18 months.