The Lake County Sheriff's Office released new body cam and dash cam video of a shootout follow a pursuit with a wanted suspect from Volusia County.

MOUNT DORA - Intense body camera video released Wednesday afternoon shows the moments an 18-year-old Deltona man got into a shootout with Lake County deputies during a high-speed chase, that ended with him crashing a truck into a Mount Dora synagogue on Monday, according to authorities.

The Lake County Sheriff's Office provided multiple body camera videos show the vantage point of several of its deputies involved in the incident.

Shots fired! Shots fired," one deputy could be heard saying amid the pursuit. "He was shooting at me in front of the cemetery," he added. 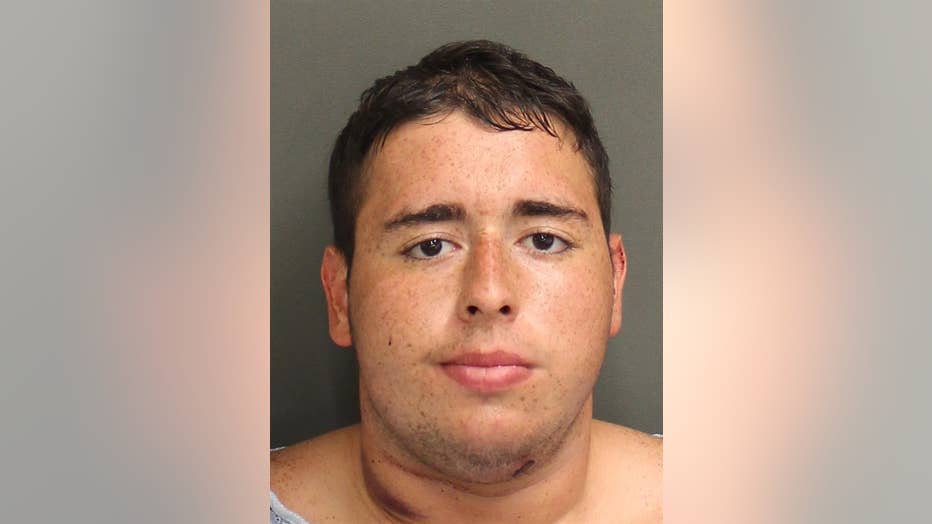 The suspect in the case is Johnny Santiago, according to the Volusia County Sheriff's Office.

Volusia County Sheriff Mike Chitwood told reporters Tuesday that Johnny's parents had grown concerned after he crashed on Interstate 4. The suspect's father, 52-year-old Juan Santiago, flew in from New York – where they primarily reside to check on their son, who was living at their second home off Lehigh Drive in Deltona.

Chitwood said the two began to argue over access to the family’s F-150, as Johnny's mother was on the phone with Juan in New York.

New bodycam video from deputies shows the moment an 18-year-old driver, a person of interest in the disappearance of his dad, crashed into a synagogue in Mount Dora, after fleeing police during a chase. That driver is also accused of shooting at police, who returned fire, striking the man, and eventually taking him into custody.

"And he’s arguing with his son to turn over the car keys to the F-150. The argument is heated. Mom hears gunshots and the phone goes dead," he explained.

When deputies arrived to the home on Monday, they found no one there. Authorities then issued an alert about the white Ford F-150 to other law enforcement.

Near the home, deputies continued to search the woods Wednesday, and family members have flown in hoping to help. "To support each other, to hold each other up and to see if we can find and locate my brother," said Justo Burgos Santiago, Juan’s cousin who says they were raised together.

He says none of them can believe this happened. "It’s a tragedy," Santiago said. "This has destroyed my family. My nephew, he is the best. My nephew, he’s a great kid. He’s an excellent kid. We’re all in shock. Again, I don’t know what happened here."

Justo Santiago said he and other family members were allowed to go into the home Wednesday and that they are cooperating with investigators.

The truck was later spotted Monday afternoon at a Walmart in Lake County and its driver, Johnny, reportedly fled from authorities, leading them on a short pursuit to Mount Dora, according to police, which was caught on bodycam video.

Intense body camera video released Wednesday afternoon shows the moments an 18-year-old Deltona man got into a shootout with Lake County deputies during a high-speed chase, that ended with him crashing a truck into a Mount Dora synagogue on Monday, according to authorities.

Johnny began shooting at law enforcement, according to officials, who returned fire.

Bodycam video showed Johnny ultimately crashing into the Traditional Congregation of Mount Dora. At that point, the visibly injured suspect gets out of the vehicle, lies on the ground with his hands on his head.

Detectives said the suspect's father hasn't been seen since Sunday and evidence found at a Deltona home have them fearing he may have been killed by his own son.