ORLANDO, Fla. - A new video shows an adorable but intense battle between two children and ‘Death Eaters’ from the ‘Harry Potter’ film franchise at Universal Orlando.

Earlier this month, Universal Orlando Resort announced that the ‘Dark Arts at Hogwarts Castle’ show would return this fall. It started again at ‘Islands of Adventure’ on September 18th, operating from dusk until dawn nightly.

The nighttime show lights up Hogwarts Castle inside the ‘Wizarding World of Harry Potter — Hogsmeade’ with state-of-the-art technology, like projection mapping, special effects, and lighting. On the ground, creatures like ‘Death Eaters’ roam around guests, bringing the ‘Harry Potter’ films to life.

Candace Harmon, also known as @epicfamilyquests on YouTube and Instagram, visited the parks with her six-year-old daughter and four-year-old son on Thursday. They went specifically to see the Dark Art Hogwarts show for the first time and her kids even sported a Death Eater symbol on their arms.

After seeing other kids pretending to fight with the Death Eaters in Hogsmeade, Candace said that her two kids got in on the action. 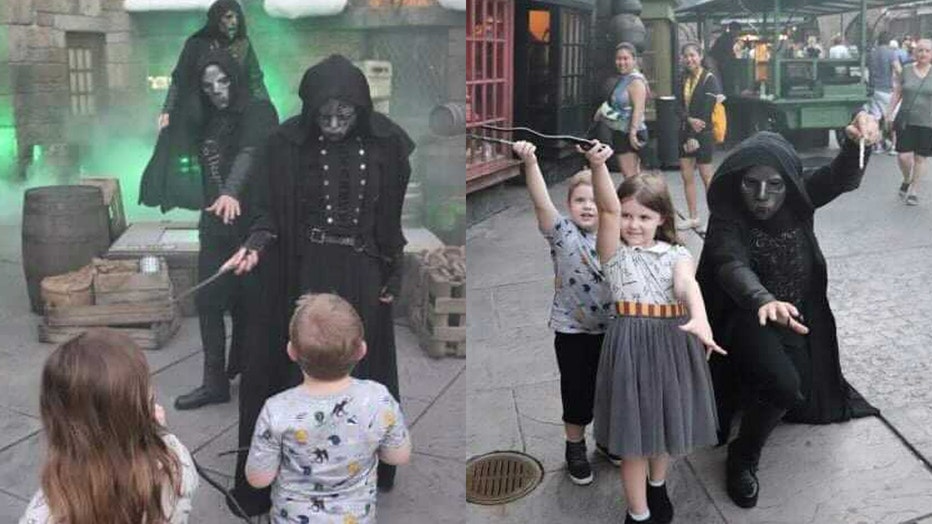 "My daughter saw that other kids around were pretending to fight with them and so she kept asking to battle with one. She noticed some Death Eaters were nicer and others would battle, so she started looking for ones to fight with," Candace told FOX 35. "We followed a couple of Death Eaters and the one in the video noticed her back. Jack and Vanessa started their battle and about a minute later the Death Eater got help because he was outnumbered."

A crowd began to form around them, cheering the children on.

"We were laughing hysterically the whole time. I'm probably annoying in the video but I was so excited. We did not expect that at all, especially with theme parks having changed things a bit. It was a nice change of pace to be able to engage with other actors. The kids loved it," Candace added. "After their battle, the audience actually gave them a round of applause. The smile on my daughter's face said everything."

The children interacted with two different Death Eater groups before deciding it was time to go ride some attractions. However, only Candace’s son ended up leaving as her daughter wanted to stay behind and keep the battle going.

"I made sure other people had time with them too, so we watched as well. The whole audience got into battling them and it was so much fun to see. It was truly the highlight of our night and really one of the best nights we've had for a while," Candace explained. 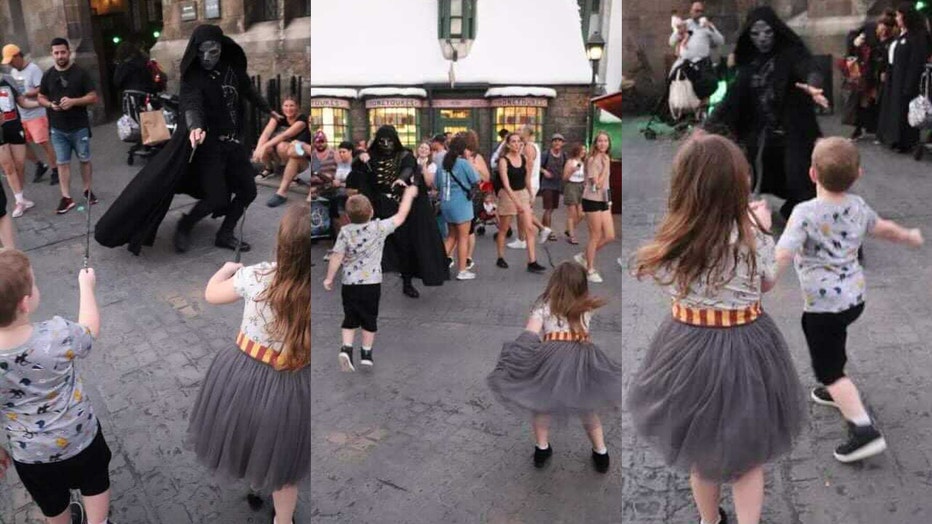 "The show on the Hogwarts castle is gorgeous, even though spooky, and the Death Eaters made the area so much fun. We miss normal character interactions and hope things can slowly come back to normal soon. This was a great start and Universal has done an amazing job," she said.

MORE NEWS: Man says he lost nearly 70 pounds after he could not fit on Universal Orlando coaster

What a battle to watch! For more from Candace and her family, be sure to check out @epcifamily guests on Instagram and Youtube.