ORLANDO, Fla. - More of Florida is now under a tropical storm watch as Elsa continues moving slowly through the Caribbean, bringing heavy rain and tropical-storm-force winds to Cuba and Jamaica, forecasters say.

In their latest advisory, the National Hurricane Center (NHC) said that Tropical Storm Elsa is currently located about 50 miles north of Kingston, Jamaica. It is currently moving towards the west-northwest at 13 mph with maximum sustained winds of 60 mph. 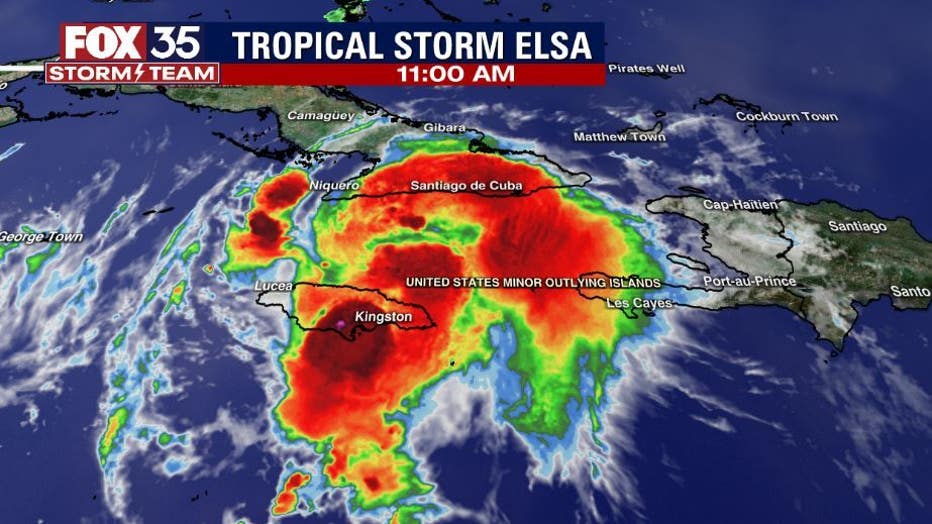 They said that Elsa is expected to turn toward the northwest sometime Sunday. This means it will move near Jamaica and portions of eastern Cuba on Sunday. Then, by Monday, the tropical storm is expected to move across central and western Cuba and head towards the Florida Straits, passing over the Florida Keys late Monday. From there, Elsa is forecasted to move near or over portions of the west coast of Florida on Tuesday and Wednesday. 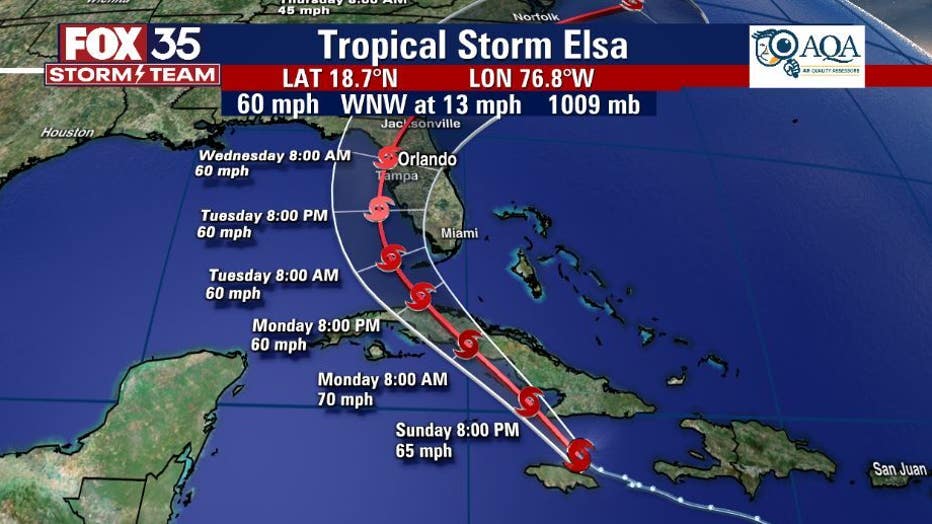 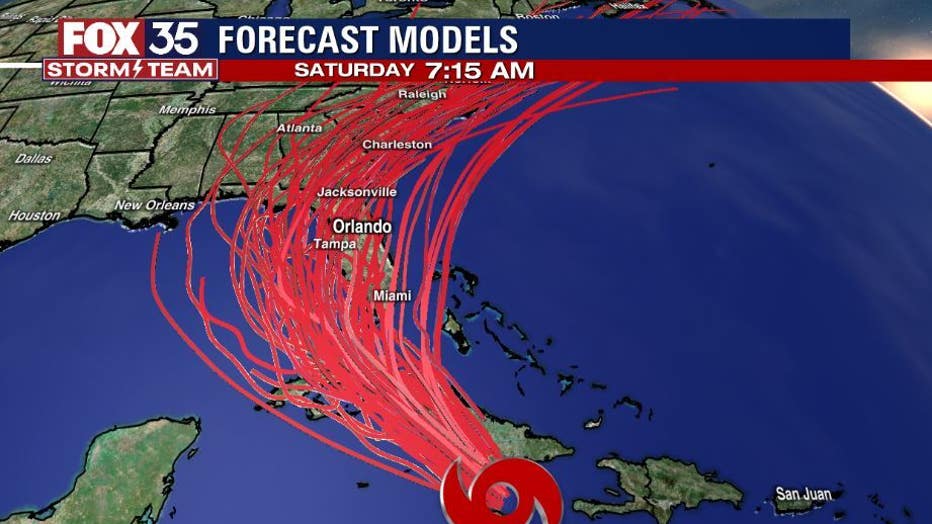 Some slight strengthening is also possible on Sunday, the NHC said. This could happen as the tropical storm approaches the south-central coast of Cuba. However, gradual weakening is forecasted to occur Monday when Elsa moves across Cuba. After it emerges over the Florida Straits and the southeastern Gulf of Mexico, some slight restrengthening is possible.

With this, Elsa is forecasted to make landfall as a tropical storm in Florida on Wednesday morning. The latest projection shows this happening along Florida's west coast. 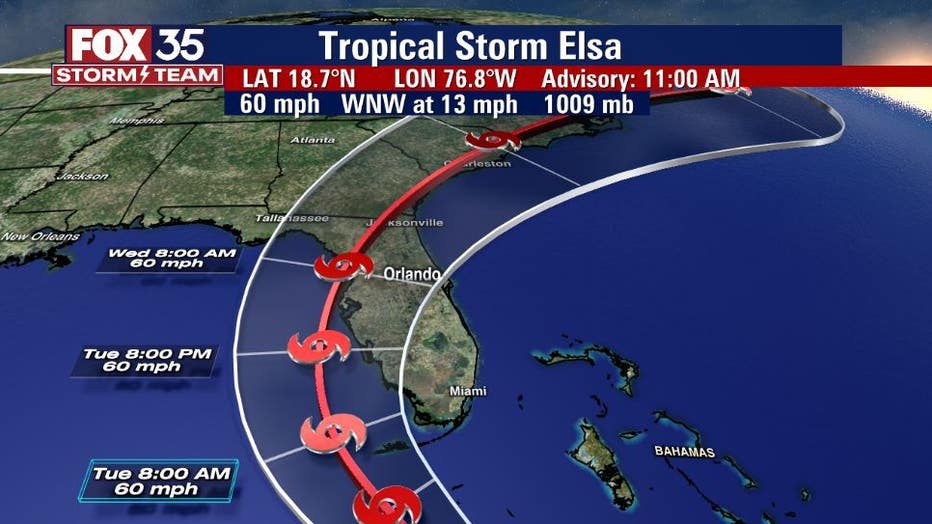 "We're going to be seeing a ton of rain, the potential for storm surge, gusty winds, and even the chance for isolated tornadoes as we head into next week," FOX 35 Storm Team Meteorologist Allison Gargaro said. "The peninsula could be seeing impacts as early as Monday night."

Several active watches and warnings are in effect due to Tropical Storm Elsa. These include: 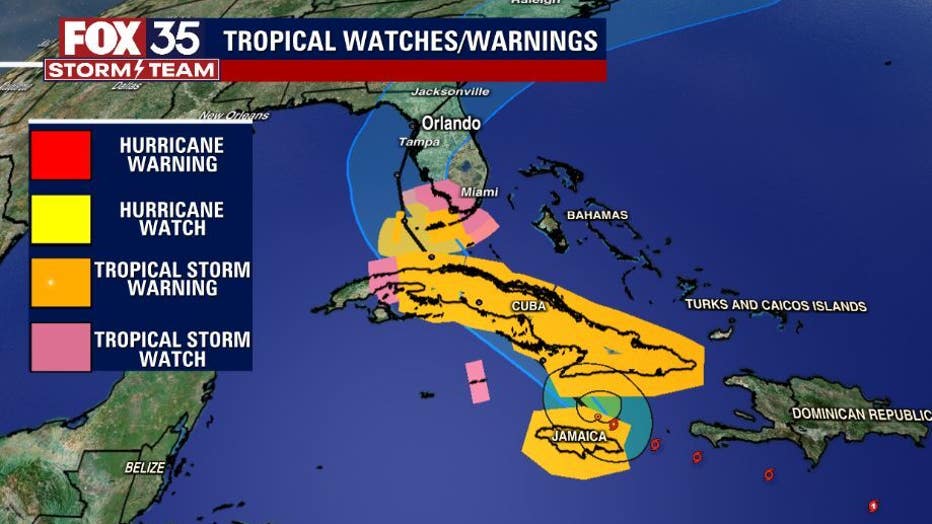 Governor Ron DeSantis has also announced a State of Emergency for several Florida counties ahead of the tropical storm.

BE PREPARED: Here's what you need to stay prepared for hurricane season

Tropical Storm Elsa killed one person in St. Lucia, according to the Caribbean Disaster Emergency Management Agency. Meanwhile, a 15-year-old boy and a 75-year-old woman died Saturday in separate events in the Dominican Republic after walls collapsed on them, according to a statement from the Emergency Operations Center.

Elsa was a Category 1 hurricane up until Saturday morning, causing widespread damage in several eastern Caribbean islands. Among the hardest hit was Barbados, where more than 1,100 people reported damaged houses, including 62 homes that completely collapsed as the government promised to find and fund temporary housing to avoid clustering people in shelters amid the pandemic.

Elsa in the Caribbean: Severe weather leaves destruction behind

Downed trees also were reported in Haiti, which is especially vulnerable to floods and landslides because of widespread erosion and deforestation.

Cuba is prepared to evacuate people along the island’s southern region on Sunday amid fears that Tropical Storm Elsa could unleash heavy flooding.

Elsa is the fifth named storm of the 2021 Atlantic hurricane season. The next name on the list is Fred. The National Oceanic and Atmospheric Administration (NOAA) announced that the U.S. is likely to be hit with another "above-normal" year, with 13 to 20 total named storms.