The Artemis 1 moon rocket is comprised of the Space Launch System (SLS), which is the super heavy-lift launch vehicle, and the Orion spacecraft, which contains three main elements including the capsule that will carry astronauts into space.

Half a day after launching from Kennedy Space Center, NASA's Orion spacecraft was more than 60,000 miles away from Earth, sending back the first images of our home planet.

Orion launched Wednesday on the Space Launch System rocket at 1:47 a.m. Eastern, beginning its nearly 26-day test flight, known as the Artemis 1 mission, around the moon.

The spacecraft is already sending back the first breathtaking views of our planet using a series of cameras that act as the "eyes" of Orion. 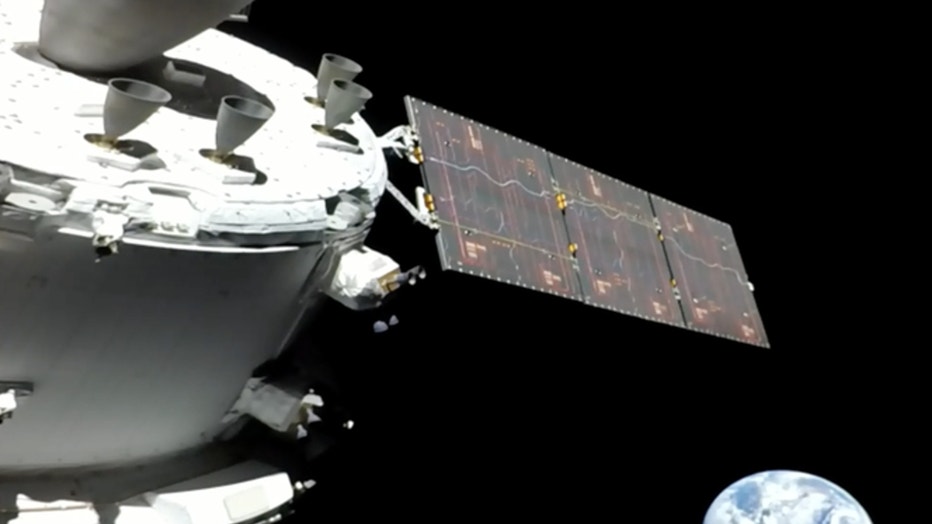 Only half a day into its journey, Orion is already sending back breathtaking views of our planet. [Credit: NASA]

Meanwhile, another camera inside Orion showed the "moonikin" Campos in the commander's seat, wearing an Orion survival system suit. Campos is equipped with sensors that will help NASA gather data for future flights with astronauts. 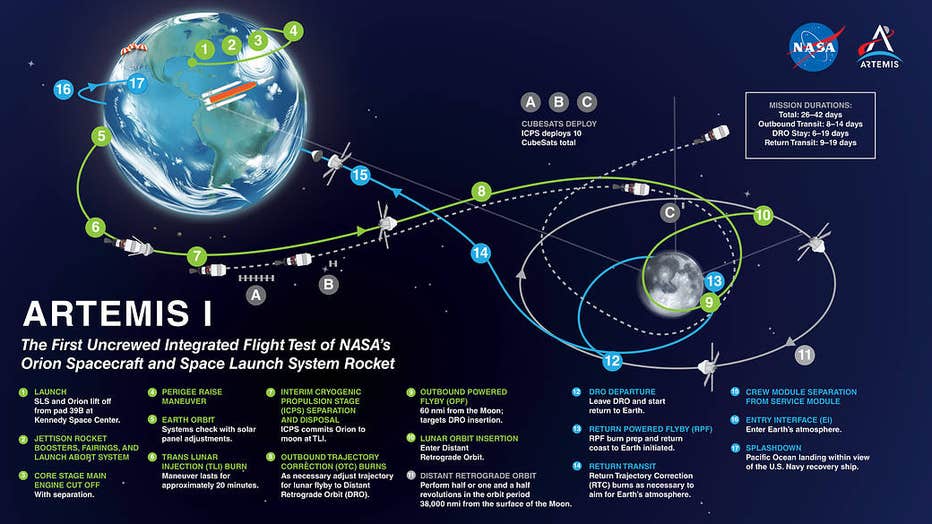 Not even a day into its spaceflight, NASA's Orion team has been busy, and several mission milestones are coming up.

Propelled by the European service module, Orion is moving at more than 5,000 mph, and its outbound journey to the moon will take several days.

Engineers will use a series of engine thrusts to ensure the spacecraft is positioned toward its lunar destination. A trans-lunar injection burn happened about an hour after Orion launched from Kennedy Space Center, setting the spacecraft on its correct course toward the moon.

Orion brought along hitchhikers in the form of 10 tiny spacecraft that will be deployed at different points in the spaceflight to the moon. A total of 10 CubeSats will be deployed from Orion's stage adapter, a ring that attaches to the interim cryogenic propulsion stage (ICPS).

According to NASA, each tiny satellite designed by international, industry and university partners will gather data to help future moon missions and Mars exploration. The European Space Agency, Italian Space Agency (ASI) and Japanese Space Agency (JAXA) are among the international payloads flying with Orion.

On Monday, Nov. 21, Orion will complete an outbound flyby power burn for its closest approach to the moon.

The burn begins around 7:43 a.m. Eastern and the closest approach to the moon happens around 8 a.m. Eastern. NASA plans to air live coverage of the event on NASA TV and online.

Orion will travel about 40,000 miles beyond the moon's far side, farther than any human-rated spacecraft. This lunar orbit is known as the distance retrograde orbit or DRO.

NASA's Artemis 1 spacecraft will orbit the moon for about six days before beginning the trip back to Earth. 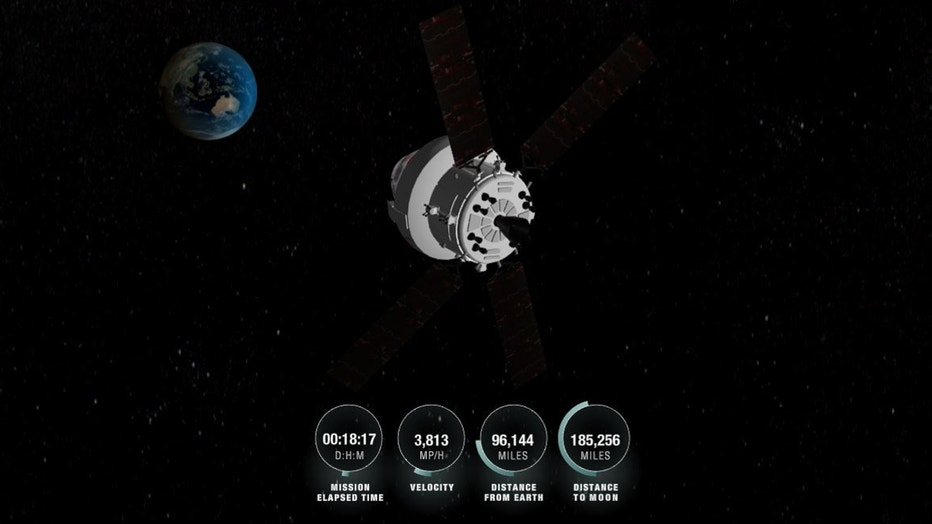 NASA launched a website tracking Orion's whereabouts that shows how fast it's traveling, the position of the spacecraft and the distance to the moon and Earth.

The space agency plans to regularly release video recaps and post daily updates on the agency's Artemis blog throughout the spaceflight.

NASA has several dedicated Twitter accounts providing updates on Orion and the Artemis 1 test flight, including NASA Orion and NASA Artemis. The NASA Moon Twitter handle will also share images and science information throughout the journey.

The Artemis 1 test flight will culminate after 25.5 days when Orion splashes down in the Pacific Ocean off the coast of California on Dec. 11.