For the first time in nearly 50 years, NASA is preparing for a historic first, launching a new powerful moon rocket, the Space Launch System, on its maiden voyage.

The last time the space agency conducted a test flight of a moon rocket was the mighty Saturn V in 1967. Two years later, a Saturn V rocket would launch the Apollo 11 mission, sending astronauts to the moon. Now, NASA is preparing to launch the SLS and Orion spacecraft from Kennedy Space Center in Florida under the Artemis program, named for Apollo's twin sister in Greek mythology.

Before the historic liftoff, here's a look back at the last time NASA launched a brand-new rocket designed to land humans on the moon.

The SLS and Saturn V have many differences and a few overlapping features.

Both SLS and Saturn V could launch from KSC launchpad 39B. The Saturn V used pads A and B at Launch Complex 39. Pad A is now leased by SpaceX, where the company launches NASA astronauts to the International Space Station and payloads for customers. SLS's dedicated launchpad will be Pad B.

SLS and Saturn V were both stacked inside the Kennedy Space Center Vehicle Assembly Building (VAB) before being rolled on mobile launch towers to the launch complex.

The key difference between the moon rockets is power and how the vehicles are thrust off the planet. Side-by-side, Saturn V is taller, standing at 363 feet, and the Artemis-1 configuration of the SLS rocket is 322 feet tall.

About 75% of the SLS's thrust comes from two solid rocket boosters (SRBs) on either side of the core stage. When the SLS launches, it will use the SRBs and four RS-25 rocket engines to produce 8.8 million pounds of thrust to get off the Earth. 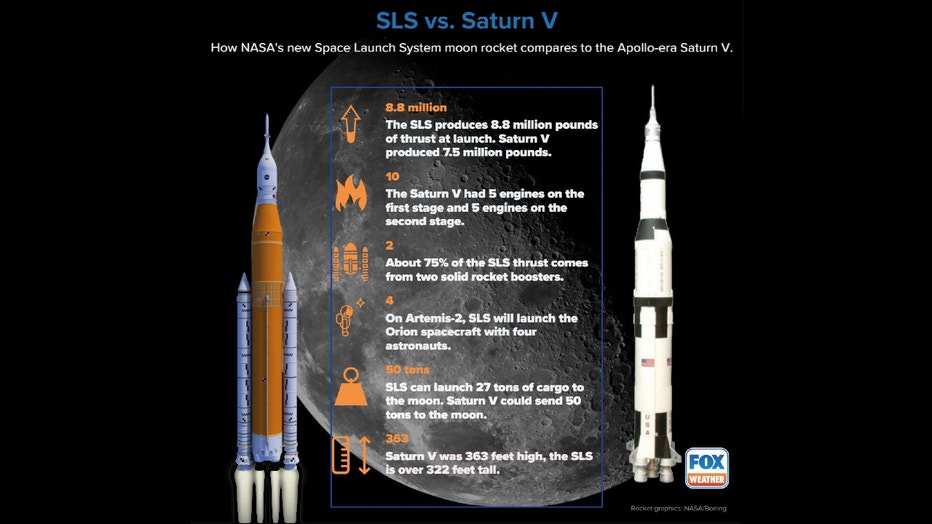 The three-stage Saturn V had 5 F-1 engines on its first stage, producing 7.5 million pounds of thrust to lift off. Once in orbit, five engines on the second stage provided the power to send the Apollo on its path to the moon.

One of the things the two rockets have in common is the propulsion systems are both developed by Aerojet Rocketdyne and the company's predecessors. The company provides 39 propulsion elements for the SLS and Orion from the booster, upper stage, the jettison motor for the launch abort system and Orion's main engine.

The RS-25 engine is the primary booster engine for SLS and was also used during the Space Shuttle Program. The rocket engine was designed and manufactured in Los Angeles before being assembled and tested at NASA's Stennis Space Center in Mississippi.

The SLS's upper stage engines, the RL-10 powered by liquid hydrogen and liquid oxygen, are made in West Palm Beach, Florida.

"The RL-10 will propel the top stack of the Artemis vehicle over 20,000 mph to leave Earth's gravity and make its way to the moon," Maus said.

The first test flights for NASA's mega moon rockets have some similar test objectives. However, the flights for Orion and Apollo 4 will look very different. 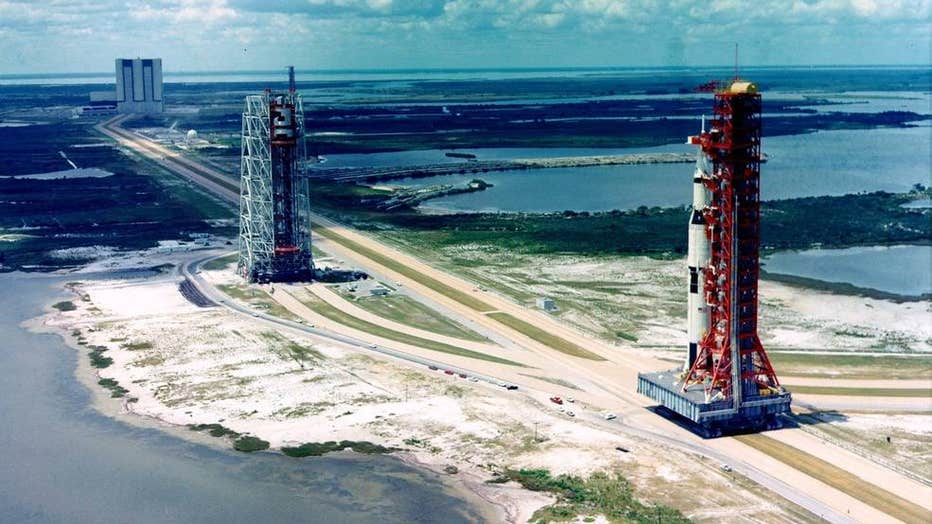 Apollo 4 has passed the Mobile Service Structure, at left, as it nears the pad. [NASA]

Goals for the Artemis 1 test flight include testing Orion’s communication, navigation and guidance systems, ensuring the overall launch and performance of SLS and ensuring Orion’s heat shield can withstand Earth re-entry at 25,000 mph. Many of those were the same for Apollo 4, the first Saturn V launch.

The Artemis 1 test flight will send Orion on a 42-day mission orbiting the moon. In 1967, Saturn V launched Apollo 4 on an 8-hour high elliptical orbit of Earth. At its greatest distance, Apollo 4 was 11,234 miles from Earth. This was done so that when the spacecraft returned, it would simulate a lunar re-entry. The Orion will travel about 40,000 miles on the other side of the moon, farther than any human-rated spacecraft.

Apollo 4 completed the flight splashing down in the Pacific Ocean, and Orion will do the same. Both spacecraft experience re-entry speeds around 25,000 mph, which is why the heat shield is so important.