Artemis l launch: Here's what you need to know about the historic launch

We're just days away from the launch of the Artemis l mission from Kennedy Space Center in Florida.

KENNEDY SPACE CENTER, Fla. - Artemis, named after the twin sister of Apollo, is known in Greek mythology as the Goddess of the Moon and the hunt. NASA has said that the name encompasses all its efforts to return humans to the Moon and eventually onto Mars.

"Through the Artemis program, we will see the first woman and the next man walk on the surface of the Moon," the space agency said when it unveiled the Artemis logo in 2019. "As the ‘torch bringer,’ literally and figuratively, Artemis will light our way to Mars."

"We go now to the Moon, not as a destination, but as a proving ground for all the technology, science, and human exploration efforts that will be critical for missions to Mars."

Project Apollo was the third United States human spaceflight program carried out by NASA, which succeeded in preparing and landing the first humans on the Moon from 1968 to 1972. [NASA]

With Earth Blue, Rocket Red and Lunar Silver for colors, every part of the identity has meaning: 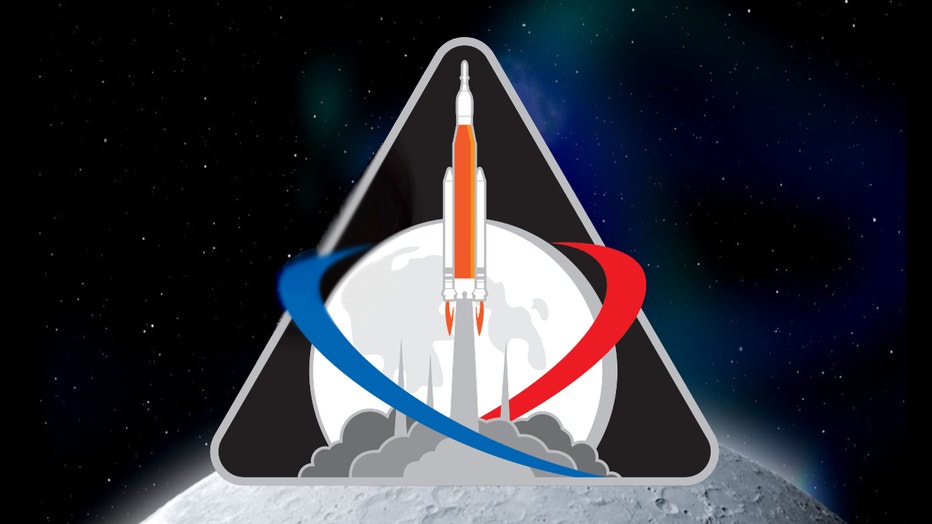 According to NASA, the artwork for Artemis I features the Space Launch System (SLS) rocket carrying the Orion spacecraft and lifting off from Launch Pad 39B at NASA’s Kennedy Space Center in Cape Canaveral, Florida.

What do the colors of the Artemis I symbol signify?

The color silver that surrounds the patch gives a nod to the silver Orion spacecraft. The orange rocket and flames represent the firepower of the SLS. "The red and blue mission trajectories encompassing the white full Moon proudly emphasize the hard work, tradition, and dedication of this American led-mission while also embracing NASA’s international partnership with ESA (European Space Agency) as both agencies forge a new future in space," NASA said in a statement online.

Three lightning towers are seen in the logo which set the scene of Launch Pad 39B, where the historic flight will lift off from on Monday.

How was the Artemis I symbol designed?

Since the Artemis I mission will not have any humans aboard,  the program teams had the rare opportunity to conceive the mission identifier.

A crew, however, will be aboard the Artemis II. Officials plan to have a symbol designed by NASA’s Astronaut Office with the help of the crew that will fly aboard.