Speaking in West Palm last week, Florida Gov. Ron DeSantis referred to the Biden Administration as the "Brandon Administration." As the crowd chants "Let's go Brandon," the governor explains his version of the origins of the phrase.

NASCAR is attempting to distance itself from the online "Let’s Go Brandon" trend that was birthed at one of its races saying it does not want to associate itself with politics of the "left or right."

"It’s an unfortunate situation and I feel for Brandon, I feel for Kelli," Steve Phelps, NASCAR's president, said Friday in comments that were confirmed by NASCAR to Fox News.  "I think, unfortunately, it speaks to the state of where we are as a country. We do not want to associate ourselves with politics, the left or the right."

Additionally, Phelps said that NASCAR will crack down on social media users who use its logo to promote the trend.

"We will pursue whoever (is using logos) and get that stuff," Phelps said. "That’s not OK. It’s not OK that you’re using our trademarks illegally, regardless of whether we agree with what the position is."

RELATED: What does ‘Let’s go, Brandon’ mean, and where did it come from?

Phelps added that he is not pleased with the fact that the popular chant started at one of NASCAR’s races.

"Do we like the fact that it kind of started with NASCAR and then is gaining ground out elsewhere? No, we're not happy about that," Phelps said. 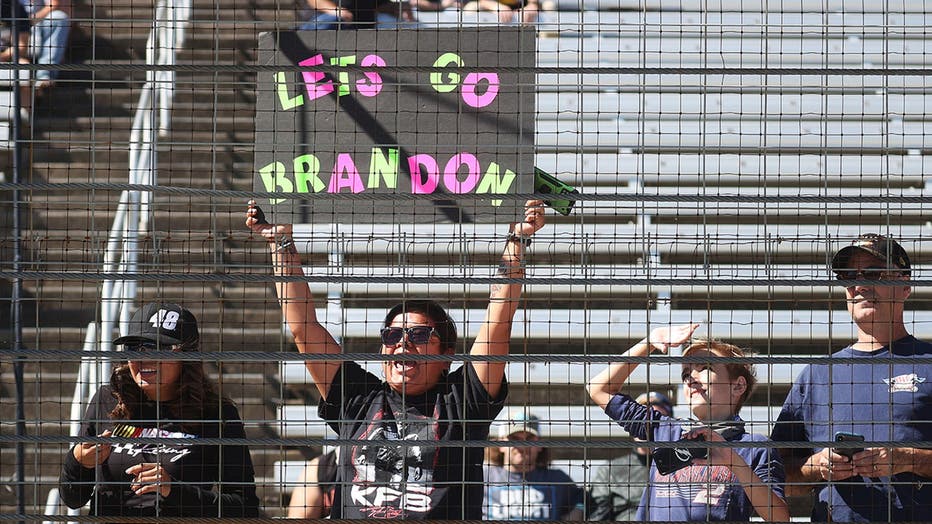 During the interview, Trump supporters and Biden critics broke out into a chat of "F--- Joe Biden" which could clearly be heard by NBC’s cameras.

Stavast, in an apparent attempt to steer the interview away from politics, reported that the crowd was really chanting, "Let’s Go Brandon!"

At that moment, the internet turned the reporter’s misstatement into a viral cultural mainstay with Americans all across the country chanting the phrase "Let’s Go Brandon" at sporting events, including it in viral pranks, billboards, memes, and the phrase even made it on the dress of a Republican congresswoman.

"It’s not a phrase, it’s a movement!" Rep. Lauren Boebert tweeted earlier this week along with a photo of her with former President Trump wearing a dress emblazoned with "Let’s Go Brandon."

NASCAR has dipped its toes into politics multiple times over the past several years including appearances at races by former President Donald Trump, banning Confederate flags at races, and promoting the Black Lives Matter movement.

NASCAR did not immediately respond to a request for comment from Fox News.