FOX 35 Storm Team Meteorologist Brooks Garner spoke with the National Hurricane Center's Jamie Rhome about Hurricane Ian's possible impacts on Florida and how the storm might compare to Hurricane Charley in 2004.

ORLANDO, Fla. - Floridians are bracing for the impacts of Hurricane Ian, which is expected to make landfall in the state as a major hurricane. As the FOX 35 Storm Team continues to track the system, models show Ian taking a very similar path across Florida that Hurricane Charley did in 2004.

Hurricane Charley was the first of four separate hurricanes to impact Florida 18 years ago, along with Frances, Ivan and Jeanne. At the time, Charley was also one of the strongest hurricanes ever to strike the United States, making landfall in Southwest Florida as a major Category 4 hurricane. 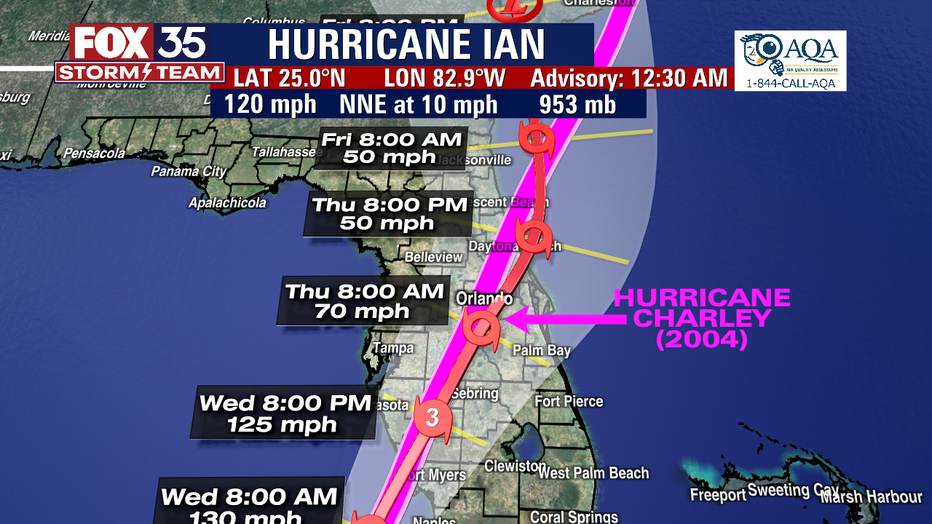 Charley was initially expected to hit further north in Tampa, but caught many Floridians off guard after the storm's track suddenly changed as it approached the state. Once on land, Charley weakened as it cut across Central Florida and passed directly over Orlando in August 2004.

The hurricane caused 10 deaths and over $16 billion in damage.

While Ian is not expected to be as strong a storm as Charley, their paths through the Sunshine State appear to be nearly identical. Models show the projected path of Ian close to what Charley's was as it cut across Florida in 2004.

The FOX 35 Storm Team will continue to track any changes with Ian and the rest of the tropics.