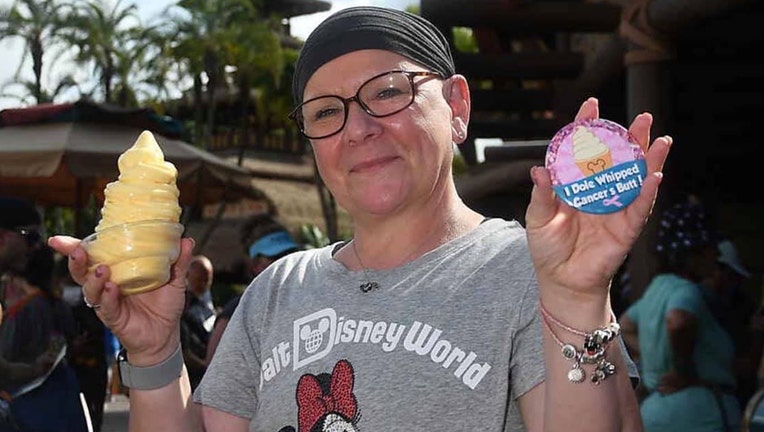 LAKE BUENA VISTA, Fla. - A woman who loves Disney and Dole Whip but has also fought a hard battle with cancer says that she recently had a special moment at Walt Disney World.

Angela Kinsley Lawler is from Hillside, New Jersey, and she was diagnosed with breast cancer in January 2021.

Since being diagnosed, she has had a double mastectomy and chemotherapy treatment. Her last round was in July but she is still receiving hormonal treatment every three weeks through March 2022.

"Although they have not said the word remission and I have not had any scans yet, I believe I am cancer-free — fingers crossed," she told FOX 35.

Angela and her family are big Disney fans. In fact, she and her husband of 36 years celebrated their honeymoon at Disney. Her family even has matching Disney tattoos to show their love for Mickey Mouse. Every September, they head to Walt Disney World to celebrate Angela’s birthday.

It was this year that a magical moment happened with a cast member taking photos near the Pirates of the Caribbean ride.

Angela was visiting the parks with family and wearing a ‘I Dole Whipped Cancer’s Butt!’ button since she finished chemotherapy earlier that year.

Upon walking by the Pirates of the Caribbean ride, Angela said that she asked a Disney photographer to take her photo.

"He noticed my button and asked if we had a minute because he had something in mind. Of course, we said yes," she explained. "As we waited for Adam to come back, I had no idea what he was planning. He asked us to follow him over to Aloha Isle. Once we arrived, I felt like a celebrity. He handed me a large dole whip and started the photoshoot." 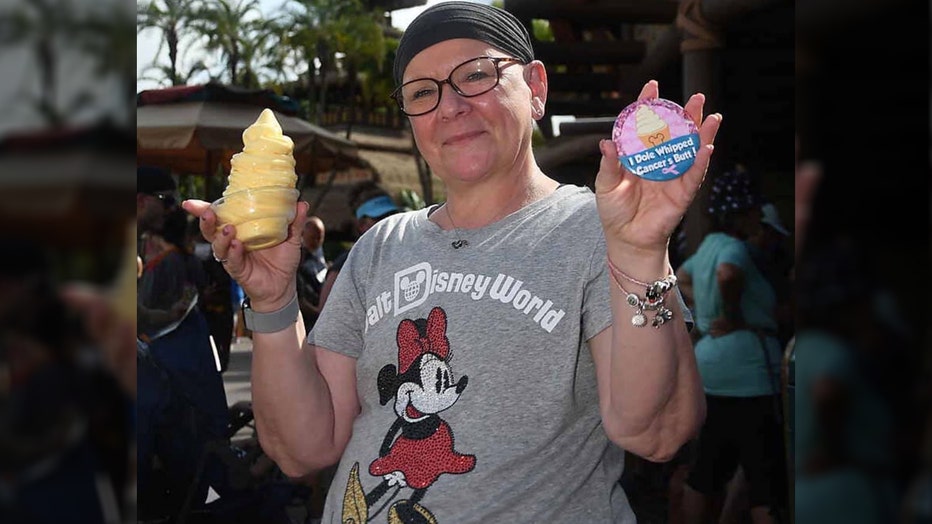 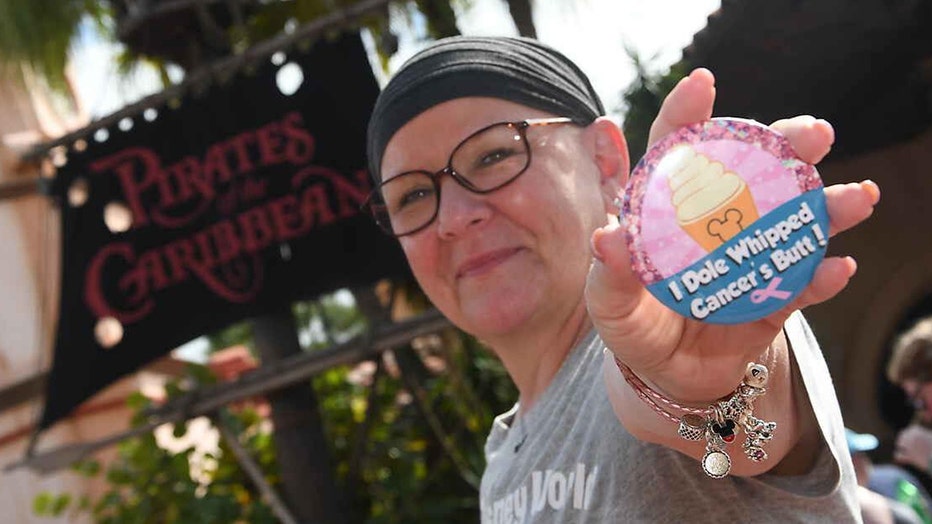 Angela explained that she is a huge Dole Whip fan — "My family is well aware of my love of Dole Whip, I always say I would eat it for breakfast, lunch, and dinner while at Disney. In 2019, when we vacationed at Disney, we attend the ‘Not-So-Scary Halloween Party’ and my costume was a Dole Whip," she said.

The photoshoot made Angela feel ecstatic, stating that the cast member made her feel like a "Dole Whip Princess." Those around her were watching. 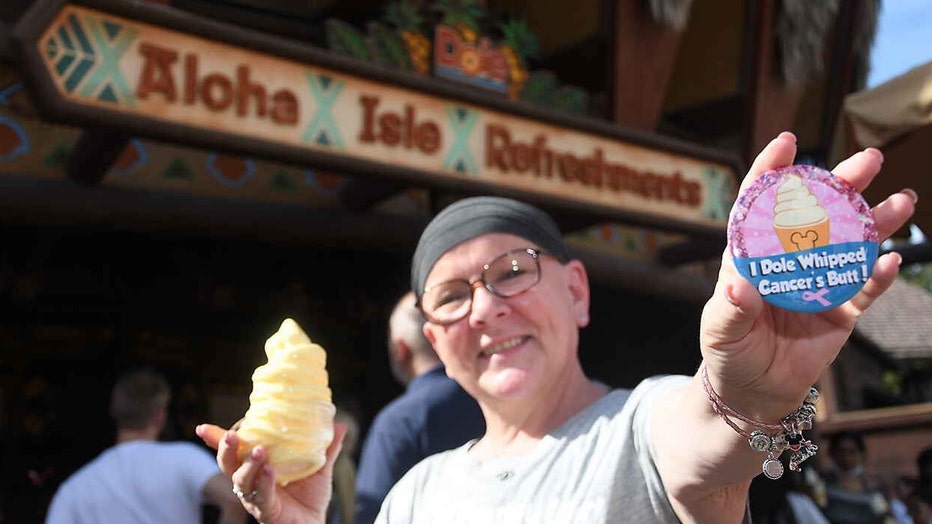 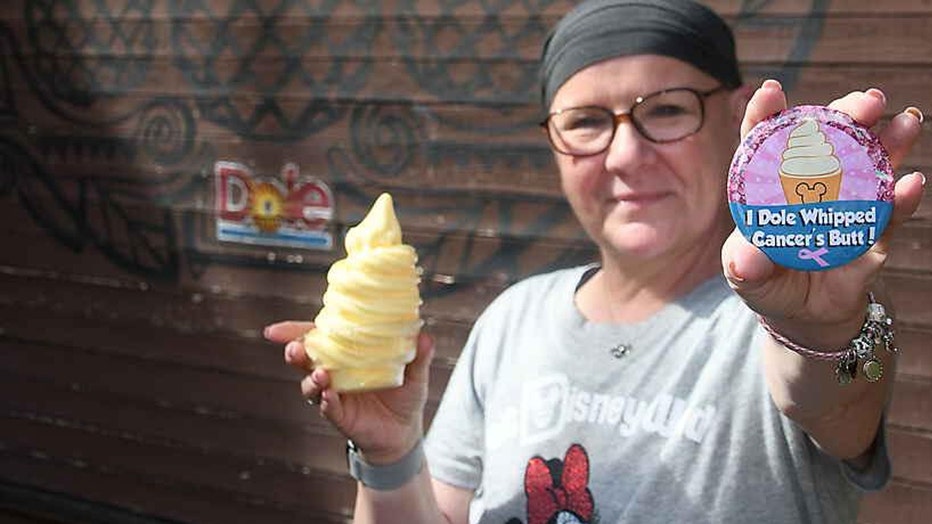 Moments like this took her away from how difficult her battle with cancer has been. She recalled how hard it was to go through the treatments, especially during the COVID-19 pandemic, when she had to do much of it alone.

"My husband could not be with me during surgery. He had to drop me at the curb and all my treatments even now, I have to do by myself," she said. "COVID has not allowed anyone to bring a support person to visits or treatment, which makes it very difficult.  Sometimes you find yourself crying alone."

Angela added, "After my first chemo treatment, I wound up with an infection that put me in the [hospital] for six days. I needed to have surgery and a blood transfusion all by myself, while my daughter was expecting her first child and my first grandchild. So, last year was a lot, as you can imagine."

Looking forward to happier times, Angela said that she is hoping to return to Walt Disney World in May to celebrate her grandson’s first birthday.

"My daughter and I would like his first haircut to be at Magic Kingdom," she said.

Angela told FOX 35 that she is excited for several moments on that trip, including introducing her grandson to Mickey Mouse, riding attractions like ‘Star Wars: Rise of the Resistance’ and ‘Remy’s Ratatouille Adventure,’ and at the top of her list, getting another Dole Whip.