Artemis I launch moved to Saturday

NASA will try again to send the Artemis I  moon rocket into orbit on Saturday after having to scrub a launch attempt on Monday.

LAKE MARY, Fla. - NASA will try again to send the Space Launch System (SLS) rocket and Orion spacecraft into orbit this weekend after technical issues scrubbed Monday’s attempt. The unmanned Artemis I  mission is supposed to be a test flight that will return a spacecraft to the moon's orbit after nearly five decades. The launch precedes Artemis II which will be the first crewed test flight to the moon since Apollo 17 in 1972.

Artemis 1 mission managers announced Tuesday that teams are preparing for the second attempt during a 120-minute window opening at 2:17 p.m. on Saturday, Sept. 3.

NASA Artemis mission manager Mike Sarafin said the decision to move forward happened after reviewing the data following the first Artemis 1 launch attempt on Monday that ended in a scrub.  Several technical issues popped up while the SLS was being fueled with 700,000 gallons of cryogenic propellant during Monday's countdown.

After a lightning delay, Launch Director Charlie Blackwell-Thompson gave the "go" to begin fueling the SLS on Monday around 1 a.m. Several potential hydrogen leak issues cropped up during the countdown, but ultimately it was the engine temperature that caused the launch director to scrub the liftoff attempt just after 8:30 a.m. Monday.

"What held us up on our attempt on Monday was the fact that we got a late start due to the weather, and so then our tanking timeline pushed into the window, and then we had a technical problem that to resolve that technical problem required more time than what we had in the window remaining," Blackwell-Thompson said.

The technical issue was not the engine hardware, but the bleed system used to get the rocket engine to a very cold temperature. Engines 1, 2 and 4 were close to temperature, but engine 3 was not. This could be caused by a hydrogen leak or a sensor error, NASA managers said Tuesday. The SLS is fueled with liquid hydrogen, a tiny molecule that also created problems for the space shuttle program.

SLS program manager John Honeycutt said the four RS-25 engines on the SLS core stage should be chilled to minus 420 degrees Fahrenheit and engine 3 was about 30 to 40 degrees from hitting that mark. Engines 1, 2 and 4 were at minutes 410, so technically, none of the engines were at temperature. 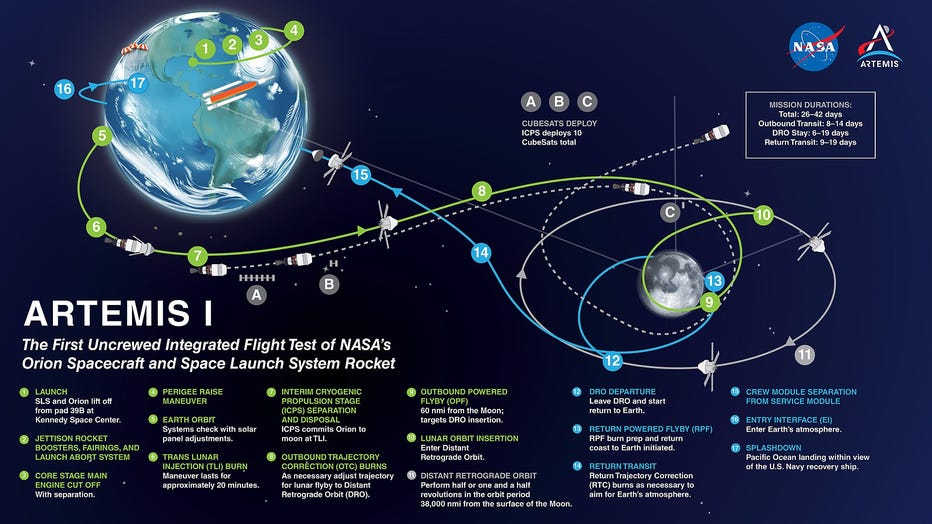 The test flight will last 42 days and send Orion on an extended moon orbit, before splashing down in the Pacific Ocean off the coast of California on Oct. 10, at a return speed of up to 25,000 mph.

What does the Artemis symbol mean?

NASA officials said many hurdles were cleared before and during the two-hour launch window. In the end, it was a hydrogen leak that needed a closer look. The issue was one that the Artemis rocket didn’t experience during any of the four wet dress rehearsals. Experts say the issue is not devastating.