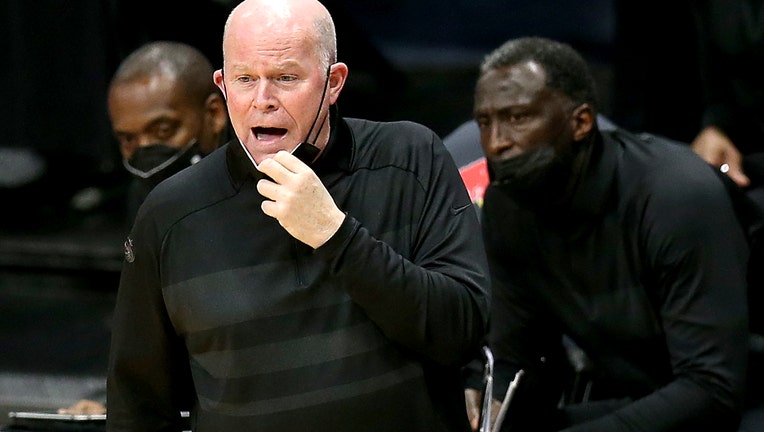 Head coach Steve Clifford of the Orlando Magic reacts to a call during the second quarter an NBA game against the New Orleans Pelicans at Smoothie King Center on April 01, 2021 in New Orleans, Louisiana. (Photo by Sean Gardner/Getty Images)

Orlando Magic coach Steve Clifford has tested positive for the coronavirus and will miss multiple games while going through the NBA’s health and safety protocols.

Assistant coach Tyrone Corbin will coach in Clifford’s absence, starting with Sunday’s game against Indiana. Clifford already expected to miss Sunday because of two positive tests in a three-day span, and subsequent testing confirmed that he has the virus.

There is no timetable for his return. Typically, those in the league who have tested positive have missed at least 10 days before being cleared to resume work. That would mean Clifford could miss much of the remainder of the season.

Even if Clifford misses just a week, he would still be out for five games. The Magic host the Los Angeles Lakers on Monday, then are at Cleveland on Wednesday and Memphis on Friday before returning home to meet the Grizzlies again on Saturday.

"I’m in a place here where I’m healthy enough so hopefully I can help somewhat," Clifford said. "But also I’m fortunate — I have a veteran staff."

Other NBA coaches have missed some time this season for virus-related reasons. Toronto’s Nick Nurse had to miss three games because he and several of his assistant coaches were dealing with the protocols, and Dallas’ Rick Carlisle missed one game earlier this month following a false positive test.

Clifford originally tested positive Thursday night. He returned two negative tests Friday, giving hope that the first positive was a false result, then learned Saturday afternoon that a test he took that morning came back positive. He was tested again after that positive, and the decision was revealed Sunday that he must enter the protocols.

Clifford has received both doses of the Moderna vaccine, getting the second one on Thursday. He is not yet considered "fully vaccinated" by Centers for Disease Control and Prevention protocols, since two weeks have not passed since his final dose. He said he has experienced no side effects from the vaccine.

He has dealt with some health issues in the past, including missing 21 games during the 2017-18 season when he coached in Charlotte after problems caused by sleep deprivation presented themselves, and he left a game at Minnesota in March 2020 after experiencing dizziness caused by dehydration.

Corbin filled in for Clifford in that game against the Timberwolves. Corbin also spent parts of four seasons coaching Utah and part of the 2014-15 season coaching Sacramento.

"I feel comfortable that I’m not really in danger," Clifford said. "That with the fact that my temperature, my oxidation numbers, how I feel, I have no side effects right now, I’m very comfortable with that."

Clifford’s situation is just the latest in a series of challenges for the Magic this season, following a trade-deadline franchise restart with the trades of Nikola Vucevic, Aaron Gordon and Evan Fournier, along with Markelle Fultz being lost early in the season to a knee injury and Jonathan Isaac missing the entire year with a knee injury he suffered in the NBA’s restart bubble last August.

Orlando was the NBA’s last team to remain unbeaten at the beginning of the season, getting off to a 4-0 start. The Magic were 6-2 after an early January sweep of a two-game set against Cleveland — then lost 15 of their next 18 games, and it’s only gotten worse from there.

Their longest winning streak in the last two months has been two games. They’ve lost 10 of their last 11 and entered Sunday with the fourth-worst record in the NBA at 18-41, just a game ahead of Detroit for the worst mark in the Eastern Conference.

"It’s been a tough year," Clifford said. "But you have to evaluate things, you have to self-reflect, and this is not easy for guys either. The easy thing to do for me as a head coach is say, ‘Oh, woe is me.’ But our guys are trying hard. ... I want them to get the most out of this last 13 games as they can."