Starting Tuesday, residents around downtown Orlando can get the tiny burgers delivered. FOX 35's David Martin is checking out the ghost kitchen making it possible.

ORLANDO, Fla. - White Castle began taking delivery orders in Orlando on Tuesday, but the demand was so high the restaurant had to stop taking online orders around noon.

Less than two hours after the online ordering system launched, the restaurant had to halt orders.

In a statement on Tuesday morning, White Castle said, "Because of overwhelming demand, we have pressed PAUSE for online ordering for now. Thanks for your patience and we look forward to satisfying your craving soon."

One FOX 35 viewer said she ordered at 10:30 a.m. when online ordering began through Uber Eats. After waiting twp hours, she was notified that her order was canceled. 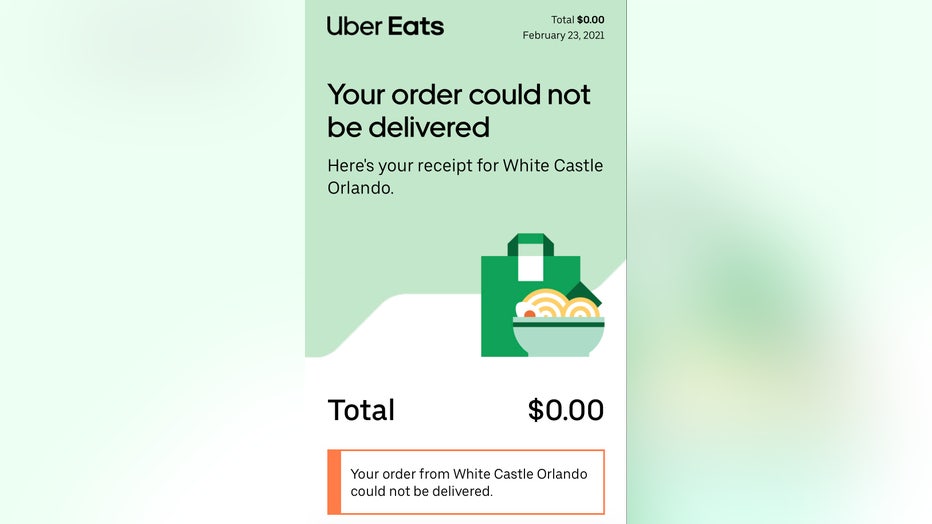 "We never want to disappoint any fans of the Castle ever," said Jamie Richardson, the vice president of White Castle Management Co. "With that in mind, our Orlando White Castle virtual kitchen will remain closed on Wednesday as we invest some time to prepare."

Richardson said the Orlando White Castle virtual kitchen will re-open on Thursday, February 25 at 10 a.m. for on-line pick-up orders only. Customers can order through the app or at whitecastle.com.

"We will not be taking delivery orders through Uber Eats for now, but do look forward to offering that service soon," Richardson added.

Deliveries started Tuesday through Uber Eats and the company’s website from a ghost kitchen located near John Young Parkway and Colonial Drive, according to a representative of White Castle. Residents living within a 15-mile radius were eligible for delivery.

The company broke ground in November on the White Castle restaurant that will be located at the O-Town West near Palm Parkway and Daryl Carter Boulevard. It will be the largest one for the chain and is expected to create over 100 jobs in the Central Florida area.

Watch FOX 35 for the latest local, national and trending stories.