Holiday shopping looks a lot different in 2020 as most stores closed for Thanksgiving and will open their doors on Black Friday. &nbsp;

ORLANDO, Fla. - Black Friday 2020 will be a year like no other, especially as the ongoing COVID-19 pandemic changes how consumers shop.

The acceleration of COVID-19 cases is causing a crisis for America’s retailers and spooking their customers just as the critically important holiday shopping season nears. Retailers will be heavily dependent on online shopping this year as many stay home.

However, some people are still going old-school and lining up for deals at stores.

FOX 35's Danielle Lama visited a Gamestop location in Orlando around 5 p.m. on Thursday and spotted people already lined up. The first person in line, Kyle Kazembe, said that he was in line since Wednesday night. 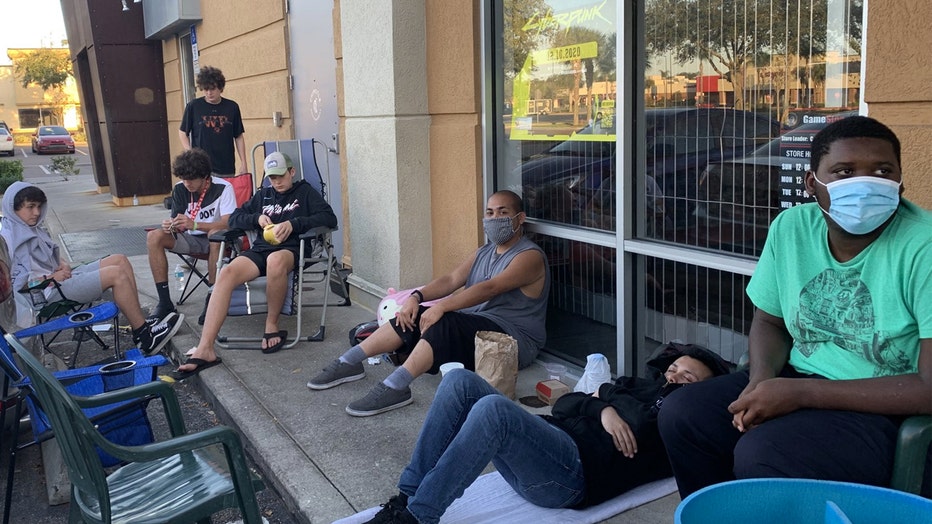 Shoppers line up outside of a Gamestop in Orlando on Thanksgiving afternoon. (Photo by WOFL)

“I was sleeping on the concrete last night which was rough but now I have a mat, Kazembe told FOX 35.  “I hang out with these guys… the hours go by really fast,” said Kenneth Johnson, who was also in line.

Gamestop will be a hot stop this Black Friday as they apparently could have Sony's PlayStation 5 in stock. Consumers have dealt with a shortage of the consoles but Sony recently announced that they will release more inventory to retailers before the year's end.

RELATED: How will the weather be for shoppers on Black Friday?

Unlike a lot of Thanksgiving’s in recent memory, most large retail stores closed for the holiday.

“It’s a Christmas season I’ve never seen before,” said Britt Beemer, CEO of America’s Retail Group. He expects around 20 percent fewer shoppers in stores on Black Friday compared to a year ago. “They started giving Black Friday specials sometime in early October and have been doing it now for the last seven weekends."

A lot of stores are offering big sales over a longer period of time, with a focus on online shopping. For those who do plan on braving any potential crowds Friday, stores like Walmart say they’ll limit the number of customers inside and promote social distancing.

At Gamestop, the dedicated shoppers say they feel like it’ll be a safe experience.

“I think Gamestop has been doing a pretty good job in terms of restrictions,” Kazembe said.

Some hours to keep in mind: