Few arrests made after curfew arrives at 8 p.m.

Downtown Orlando saw an earlier curfew on Wednesday night, beginning at 8 p.m. It was at that time that Orlando police officers began to clear protesters and they also made a few arrests.

It was the fifth night of demonstrations in Downtown Orlando. Several hundred people marched from Orlando City Hall to the Orlando Police Department Headquarters throughout the day. Authorities said the rallies were mostly peaceful, and they had hoped to avoid any conflicts.

The new curfew time is in place for portions of Downtown Orlando bordered by Colonial Drive to the north, State Road 408 to the south, Summerlin Ave. to the east, and Tampa Ave. to the west.

It comes after a peaceful day of protests in Downtown Orlando on Tuesday ended with some tense moments between officers and demonstrators. When the 10 p.m. curfew went into effect on Tuesday, tear gas was sprayed onto protesters when they started throwing bottles at officers.

The protests remained mostly peaceful on Tuesday until the Orange County curfew began.

The Orlando protesters have joined a nationwide rallying cry, demanding justice for George Floyd and reforms to police policies. As people moved between Orlando City Hall and the OPD Headquarters, they were escorted by police officers and cheered on by some residents along South Street.

The crowds on Wednesday were considerably smaller than the day before. Around 2,000 protesters marched through Downtown Orlando on Tuesday, chanting with signs in hand, speaking out against what happened in Minneapolis, and denouncing police brutality.

"I feel like it's my duty to walk with people now when they need that. It's important to support our brothers and sisters and people," one protester told FOX 35 Orlando.

At one point, officers and demonstrators were seen kneeling together outside of City Hall. The moment started when the crowd called on the two officers to kneel in honor of Floyd.

Community activist and Pulse nightclub survivor Brandon Wolf speaks to FOX 35 Orlando about how protesters can make their voices heard.

Much of this peace continued into the night but as the curfew began, that's when conflicts began.

Organizers planned a sit-down outside Orlando City Hall but were told that they needed to leave the area, as curfew was in effect. Police officers formed a line and began driving protesters from the scene. Police said that tear gas was then deployed at the protesters because rocks and bottles were being thrown at officers.

Orlando police officers used tear gas to disperse crowds gathered near Orlando City Hall. Police told demonstrators to leave when the 10 p.m. curfew began and when protesters did not budge, the tear gas was deployed. That was met with flying water bottles directed at police officers.

The Orlando Police Department gave an update on the protests on Wednesday afternoon.

They announced that portions of Downtown Orlando will now have a curfew between 8 p.m. and 5 a.m. The rest of Orange County will remain under a 10 p.m. to 5 a.m curfew.

Orlando Police give update on protests and curfew

Portions of Downtown Orlando will now have a new curfew. 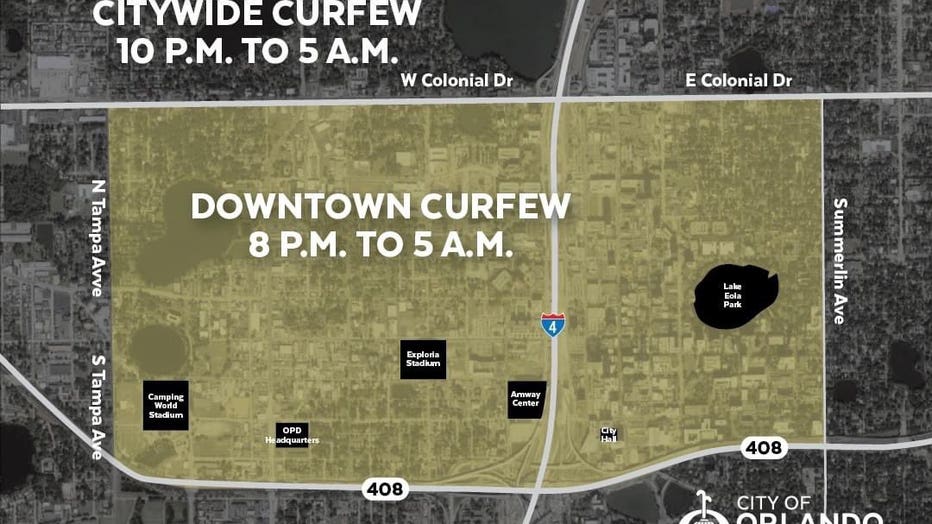 Orlando Police said that the new curfew in these areas will help them protect all residents and demonstrators.

Barricades, police cruisers, and officers remain outside of the Orlando Police Department headquarters on Wednesday.

Several protesters said that they will be back in Downtown Orlando on Wednesday to protest more in the name of George Floyd.

Orlando Police believe the protests will continue throughout the week. Chief Orlando Rolon said that he wants people to exercise their right to protest but it must remain peaceful.

Demonstrations are growing across the country as people demand justice in the name of Floyd, who died last Monday after a Minneapolis police officer kneeled on his neck, holding him down for several minutes.

Sanford Police Chief speaks out about the death of George Floyd

Sanford had their fair share of demonstrations following the death of Trayvon Martin.