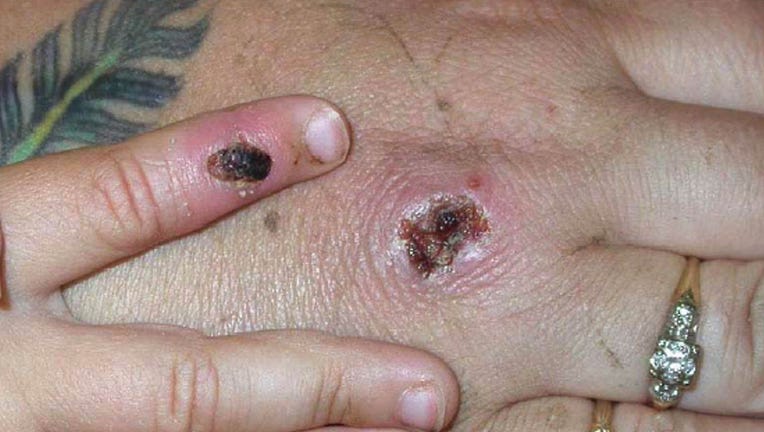 UNDATED ? JUNE 5: In this Centers for Disease Control and Prevention handout graphic, symptoms of one of the first known cases of the monkeypox virus are shown on a patient?s hand June 5, 2003. The CDC said the viral disease monkeypox, thought to be

ORANGE COUNTY, Fla. - A person connected to Wedgefield School in Orange County has contracted monkeypox, the school district announced in a message to families Wednesday.

In a statement to FOX 35 News, Orange County Public Schools said they were notified about the diagnosis by the Florida Department of Health.

The district said the individual has not been on the school's Kindergarten through 8th-grade campus since Sept. 7 and will remain at home until cleared to return.

Orange County Public Schools said the health and safety of students and staff is its top priority. All areas of the campus have reportedly been cleaned and sanitized.

Officials said it's a viral infection transmitted during prolonged, face-to-face contact, or during intimate physical contact, such as kissing cuddling or sex. The illness typically lasts for two to four weeks.

WHAT ARE MONKEYPOX SYMPTOMS?

If a person begins to have the following symptoms, they are asked to call their healthcare provider and ask about testing:

Those with symptoms should avoid contact with others, stay at home, wear a mask and cover sores to protect others.

WHO CAN GET MONKEYPOX?

Anyone can get the infection, but the health department said men who have sex with men remain at the highest risk.