Nicholas has been downgraded to a tropical storm hours after making landfall along the Texas coast as a Category 1 hurricane. Nicholas made landfall around 12:30 a.m. Tuesday on the eastern part of the Matagorda Peninsula, about 10 miles west-southwest of Sargent, with maximum sustained winds at 75 mph. According to the NHC, Nicholas is moving north-northeast around 9 mph and is expected to move more slowly to the northeast later Tuesday. It is expected to move eastward over Louisiana by Wednesday.

LAFAYETTE, La. - Millions of people were under flash flood watches on Thursday as Nicholas hovered over the central U.S. Gulf Coast, bringing the threat of excessive rainfall in the coming days as thousands remained without power in Texas and Louisiana.

Nicholas became a post-tropical cyclone on Thursday morning, located along the central Louisiana coast with maximum sustained winds of 25 mph, according to the National Weather Service Weather Prediction Center. The storm was crawling north at about 2 mph.

Flash flood watches were in effect for portions of southeast Louisiana, across southern Mississippi and Alabama, and through the Florida Panhandle, through Friday.

The storm initially made landfall early Tuesday in Texas a Category 1 hurricane, the 14th named storm of the 2021 Atlantic hurricane season. It dumped as much as 10 inches of rain on parts of the state — and preliminary reporting of nearly 14 inches of rain in Galveston, the weather service said.

Houston reported more than 6 inches, while parts of Louisiana had already received more than 10 inches of rain from the storm.

In Texas, more than 45,000 people were without power on Thursday morning, according to the utility tracking website PowerOutage.US. And in Louisiana, over 50,000 were still without electricity more than two weeks after Hurricane Ida made landfall on Aug. 29. Power had largely been restored in New Orleans, where the entire city had been blacked out by the storm. But problems remained, including piles of debris and smelly garbage that officials were struggling to collect. 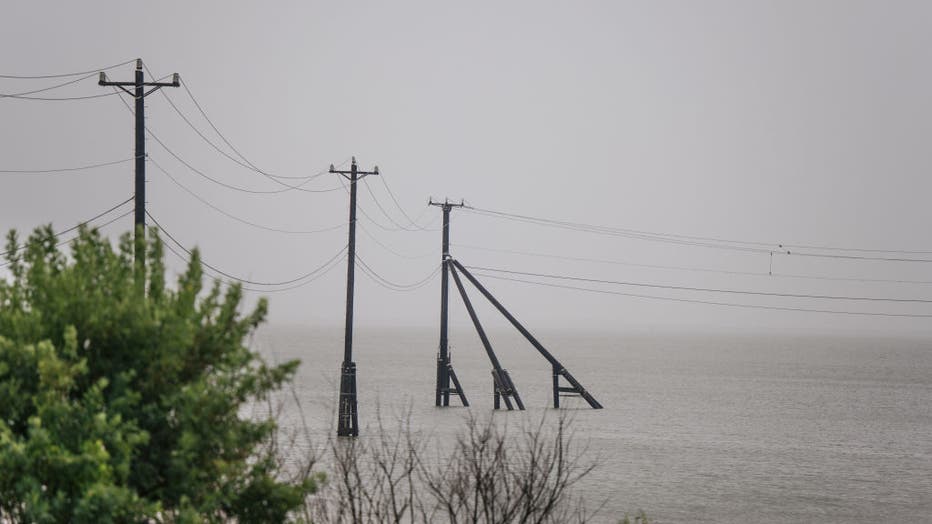 Transmission towers are shown ahead of Tropical Storm Nicholas on Sept. 13, 2021, in Galveston, Texas. (Photo by Brandon Bell/Getty Images)

Forecasters said Nicholas would weaken considerably on Thursday as it slowly moves northward across central Louisiana, but the storm would still bring the threat of flooding.

"Nicholas will eventually dissipate tonight but will continue to pose flash flooding threats to the central Gulf Coast into the weekend," the NWS said. "A slight risk of excessive rainfall leading to flash flooding is in effect for parts of the central Gulf coast through Friday as Nicholas continues to pull a substantial amount of tropical moisture into the region, where multiple inches of rain are expected."

Scattered to isolated thunderstorms were also possible across much of the Southeast and East Coast through Saturday morning, forecasters said.