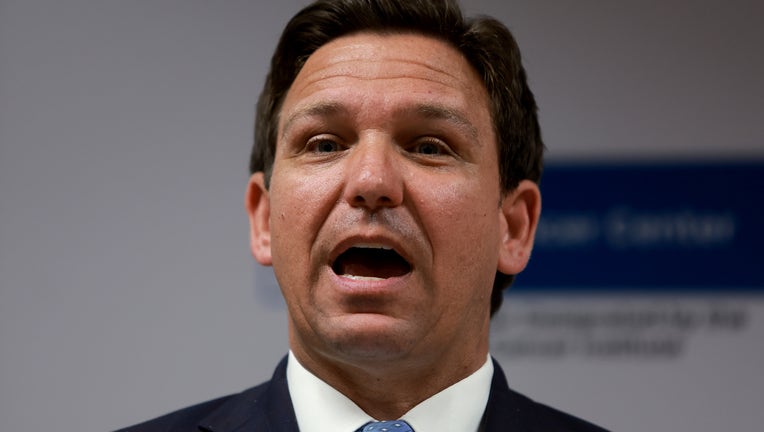 MIAMI, FLORIDA - MAY 17: Florida Gov. Ron DeSantis speaks during a press conference at the University of Miami Health System Don Soffer Clinical Research Center on May 17, 2022 in Miami, Florida. The governor held the press conference to announce tha

TALLAHASSEE, Fla. (AP) - About 150 bills will become laws in Florida on Friday — several of which Gov. Ron DeSantis is using to motivate his conservative base as he seeks reelection and a possible 2024 bid for president.

But the ones with the most appeal to his political base are also the subject of legal challenges: A ban on abortion after 15 weeks, legislation limiting how race can be discussed in classrooms and at private companies, and a law that opponents call "Don’t Say Gay" that prevents teachers from talking about gender identity and sexual orientation with younger students.

A judge on Thursday announced he would temporarily block the implementation of the abortion legislation. But the decision will not go into effect until he signs a written order, which the judge said would likely happen next week. The law goes into effect Friday and the state has said it will appeal the ruling.

Then there are far less controversial new laws, including strawberry shortcake becoming the official state dessert, helping with veterinary bills for people who adopt retired police K-9s, and recognizing in state law that the U.S. Space Force is part of the country’s military.

DeSantis signed the abortion bill before the U.S. Supreme Court last week ruled there isn’t a federal constitutional right to the procedure, leaving decisions on terminating pregnancies up to states.

Also being challenged is a law that DeSantis sought to ensure critical race theory wasn’t taught at schools or as part of businesses’ training programs.

The law bars instruction that says members of one race are inherently racist, and that they should feel guilt for past actions committed by others of the same race or that a person’s status as privileged or oppressed is necessarily determined by their race. It also bars the notion that meritocracy is racist, or that discrimination is acceptable to achieve diversity.

Opponents say the law will have a chilling effect on teaching about subjects like slavery and segregation.

Similarly, opponents of the law preventing discussion of sexual orientation and gender identity say it marginalizes LGBTQ people, and they call it the "Don’t Say Gay" law. It has received national attention and was mocked at the Oscars.

DeSantis and Republicans say the law is reasonable and parents, not teachers, should decide whether to have conversations on the issues with their children. It applies to students in grades K-3 as well as instruction to older students that is not "age-appropriate or developmentally appropriate."

Another education law that was contentiously debated would set 12-year term limits for school board members and also give parents more of a say in what text and library books elementary schools can use.

All elementary schools will have to provide a searchable list of every book available in their libraries or used in instruction. School boards must let the public know when they plan to consider approving new instructional books and allow anyone to comment. Any objections to the material, by a parent or not, must be reported to the state.

Democrats opposed the legislation, saying it amounts to censorship, and compared it to book burning.

Among other laws going into effect Friday are legislation that will:

— Remove the statute of limitations for sexual battery, certain acts of lewd and lascivious behavior, and use of or promoting sexual acts with children.

— Allow local governments to ban smoking at beaches and parks.

— Require background checks on apartment building employees, require apartments to maintain a log for each unit’s keys, and increase notification for maintenance and repairs from 12 to 24 hours.

— Expunge arrest records of juveniles accused of their first misdemeanor if they complete a diversion program,

— Allow religious institutions to continue to meet after some state declared emergencies.

— Make it easier for grandparents to receive visitation rights to see their grandchildren.

— Make it easier for people who have experienced addiction or mental health conditions to provide peer-to-peer services for others trying to overcome similar problems.