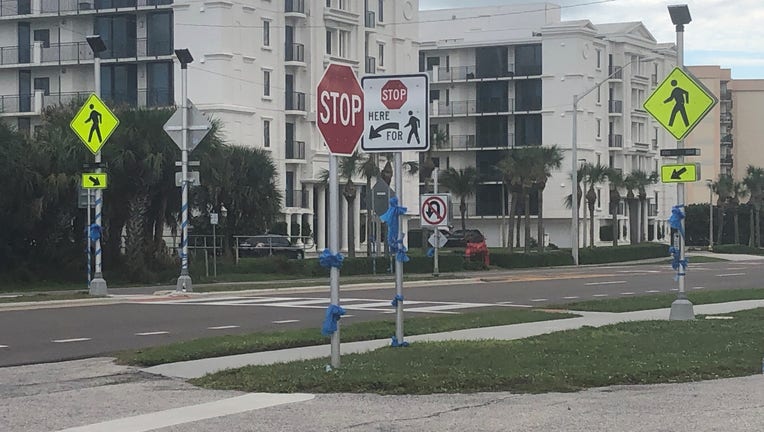 SATELLITE BEACH, Fla. - The Brevard County Commission made an important move on Tuesday night, as there has been continued public outcry over 18 crosswalks in the area that use a flashing warning light to stop cars while people cross.

All five commissioners voted to pass two motions: To ask state officials to overhaul the crosswalks and to install solid red lights.

12-year-old Sophia Nelson would have gone back to school after the holiday break this week, but tragically, she passed away on Christmas after being struck by a vehicle while crossing the street. Members of her community spoke out, stating that the crosswalks in the area are dangerous.

FOX 35 News spoke to her father Mark and he said the family is still traumatized by the collision that happened before their very eyes. Mark Nelson said that although the grief is overwhelming, he feels comforted that all five Brevard County Commissioners were united, voting to send a letter to the Florida Department of Transportation (FDOT) asking for the crosswalk changes.

Commissioner Bryan Lober said that he hopes FDOT will act quickly now and install new lights that turn red when a walker is trying to cross. He also said that he does not "want to speculate on how FDOT may respond to it. I can tell you there have been certain instances when FDOT has been a pleasure to deal with and certain instances when it’s been quite the opposite."

Dan Willemin, who organized demonstrations and spoke with county leaders, wants to send the message that the crosswalks need to go. He said that this week's vote shows that they heard that message and agree. Sophia’s death is the third since the crosswalks were installed last year and Willemin said that "we shouldn’t have needed ‘a wake up call’... a lot of people have been saying these things are dangerous for almost a year now."

However, transportation officials in the county said this should be about drivers looking for pedestrians, not ripping out the less-than-a-year-old equipment.

"It's true, I would say, to an extent, that we can’t legislate common sense, I think we essentially avoid having to do that- by putting in these devices." Lober said.

Leaders in Brevard County and in the grassroots movement say if Governor DeSantis weighs in on this and sides with them, it will put pressure on FDOT to replace the crosswalks.