The game between the Florida Gators and the LSU Tigers has been postponed after there was an outbreak among the UF football team.

The game between the Florida Gators and the LSU Tigers has been postponed after there was a coronavirus outbreak among the UF football team.

The team confirmed the decision on Wednesday afternoon during a news conference, reporting that 21 total team members are positive for COVID-19, meaning there are less than 50 scholarship players available to play.

All activity with the team is on hold indefinitely, the team also said.  LSU's next scheduled game is now on Oct. 24, when the Tigers are slated to host South Carolina.

Florida coach Dan Mullen apologized Wednesday, “if I offended people or anybody out there,” after comments about wanting to pack Florida Field with 90,000 fans during the coronavirus pandemic.

Mullen also said two assistant coaches tested positive for COVID-19. The 10th-ranked Gators shut down team activities Tuesday after learning they had 19 positives and about a dozen more quarantined because of contact tracing results.

Florida moved to everyday testing after getting a spike in positives from Sunday’s test results. The Gators expect to know more after getting results from Wednesday morning tests.

“I don’t want to speculate where we are right now,” Mullen said. “We’re taking an abundance of caution. … We’re certainly hoping and everybody that we’ve worked for getting these tests back before we conduct any team activity to make sure that we’re keeping everyone as safe as possible.”

FOX 35's Samantha Sosa has the story on the Gators' football coach saying he would like to see a full house at UF's next game.

The shutdown came three days after Mullen’s comments about wanting to pack the Swamp and create a better home-field advantage against the Tigers following a loss at Texas A&M. Mullen didn’t double down Monday, but he didn’t back down, either.

He brushed aside criticism and praised his players for how well they have handled COVID safety protocols.

An increase in positives followed. Now, the Gators are trying to trace the origin of the outbreak.

“We’ve not been able to do that because I would still not be surprised if one to two of them were random,” Mullen said. “And the randoms can throw you off with tracing with, ‘Oh, this guy got it. It couldn’t have been that. Or how did this person get in the group of getting it?’ 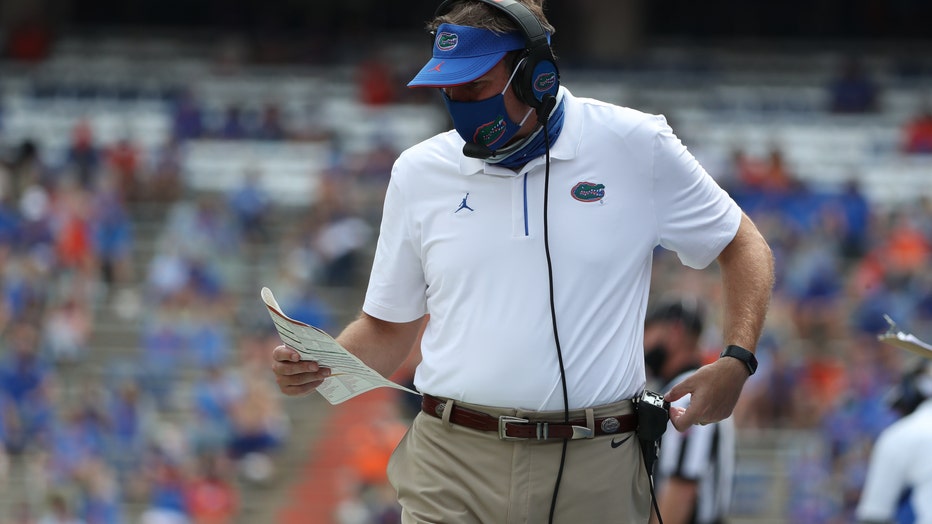 “Again, I don’t want to speculate to where and how it could have happened. I want to get some more numbers back before we do that. But our medical staff has really spent time trying to trace the origins of where the clump of them would have come from.”