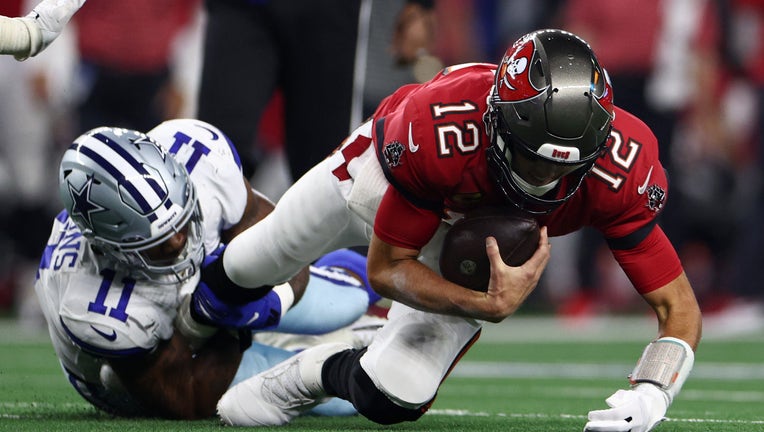 ARLINGTON, TEXAS - SEPTEMBER 11: Micah Parsons #11 of the Dallas Cowboys sacks Tom Brady #12 of the Tampa Bay Buccaneers during the first half at AT&amp;T Stadium on September 11, 2022 in Arlington, Texas. (Photo by Tom Pennington/Getty Images)

The Dallas Cowboys couldn’t get anything going on offense, while Tampa Bay Buccaneers quarterback Tom Brady led the way to a 19-3 victory in Arlington on Sunday Night Football.

Brady had some troubles finding the end zone, as Ryan Succop was called to kick five field goals in this one, four of which going between the uprights. But Brady finally cashed in his 625th touchdown of his career, a perfectly-placed fade to wide receiver Mike Evans to the back left of the end zone, which Evans hauled in one-handed.

That score made it 19-3, pulling away from the Cowboys who didn’t have any rhythm with the ball in their hands under quarterback Dak Prescott. 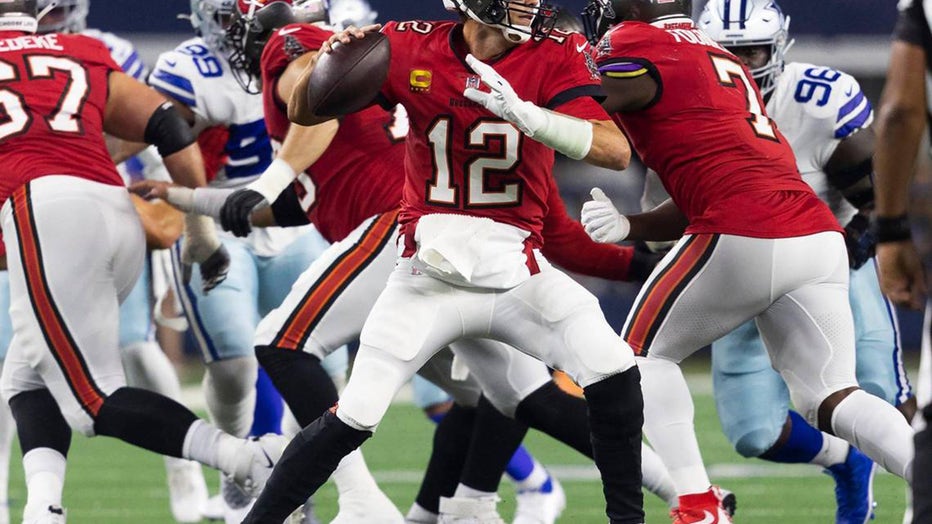 Tampa Bay’s defense was all over his receivers and they stopped Ezekiel Elliott from running the ball at them. Prescott needed to make the throws, and he didn’t deliver.

He would finish the night just 14-for-29 for 134 yards with no touchdowns and an interception that Antoine Winfield Jr. snatched in the first half.

Prescott would also leave the game in the fourth quarter after his hand hit the hand of Bucs linebacker Shaquil Barrett. It was later revealed that Prescott needs surgery on that thumb. He is now out indefinitely.

As for Brady, he finished the night going 18-for-27 with that touchdown and an interception of his own. Not his best night, but running back Leonard Fournette certainly helped him out, rushing for 127 yards on 21 carries.

The Bucs did show why they loved signing Julio Jones this offseason as well. Some believed Jones’ best days were behind him after a so-so season with the Tennessee Titans, but he looked to be in great shape.

Jones caught three passes for 69 yards, including a deep bomb from Brady toward the end of the first half that Jones dove to catch. He was also used on end-arounds, taking two carries for 17 yards.

Evans was the top pass catcher with five for 71 yards. Chris Godwin was used sparingly with just three catches for 35 yards. He tore his ACL in Week 15 of last season.

The Cowboys were the only team in the NFC East to drop their season opener on Sunday. They will remain home next week to face the Cincinnati Bengals, who fell in overtime to the Pittsburgh Steelers in Week 1.

Tampa Bay will stay on the road, heading to New Orleans to face a division rival, the Saints, next Sunday as well.