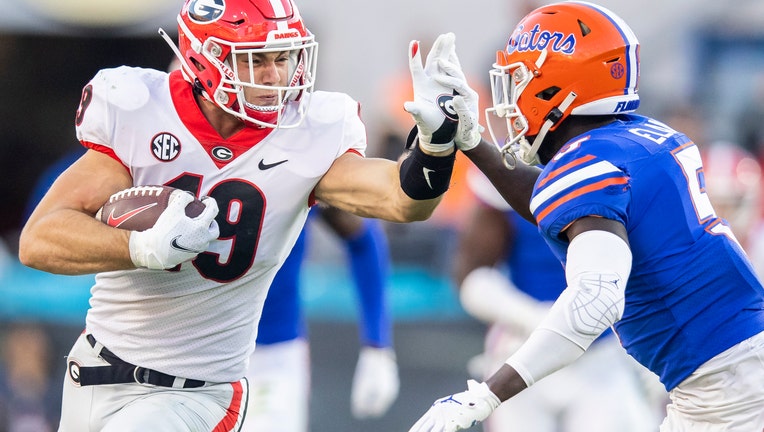 Brock Bowers #19 of the Georgia Bulldogs runs for yardage against Kaiir Elam #5 of the Florida Gators during the second half of a game at TIAA Bank Field on October 30, 2021 in Jacksonville, Florida. (Photo by James Gilbert/Getty Images)

Raise a glass to Georgia’s defense. Or three, actually — one for each second-quarter turnover that turned the rivalry known as "The World’s Largest Outdoor Cocktail Party" into another lopsided affair.

The top-ranked Bulldogs and the nation’s No. 1 defense dominated Florida, scoring three touchdowns off miscues in a 12-play sequence that carried them to a 34-7 victory Saturday, their fourth in five years in the neutral-site game.

Coach Kirby Smart’s team won its 12th straight since getting steamrolled in Jacksonville a year ago. The Bulldogs’ injury-riddled defense allowed 571 yards in that one, the most in Smart’s six seasons.

Georgia vowed to not let it happen again and responded with another demoralizing effort that might be their most impressive all season.

Florida (4-4, 2-4) managed no points, 11 first downs and 214 yards through three quarters and looked like its decades-old, NCAA-record scoring streak might be in jeopardy down the stretch. But the Gators finally got on the scoreboard with 2:49 remaining, extending the streak to 418 games. They have scored in every outing since getting shut out by Auburn in 1988.

Emory Jones’ late touchdown run, though, did little to negate Georgia’s mastery for three-plus hours on a cool, sundrenched afternoon. All the empty seats on Florida’s side of TIAA Bank Field told the real story.

This one was over by halftime.

And Georgia’s defense deserved a toast for making it happen.

"It was a whole bunch of momentum," Smart said. "You get momentum like that, it can be an over-swell."

Smith started the onslaught by ripping the ball out of Anthony Richardson’s arms at the end of an 8-yard run. James Cook sliced his way through Florida’s defense for a 10-yard touchdown run on the ensuing play.

Richardson was making his first career start, getting the nod over turnover-prone Jones. But he wasn’t the difference Florida fans expected.

"The talent’s there," Gators coach Dan Mullen said. "We’ve just got to get him coached up on the intangibles."

Two plays later, Travon Walker tipped Richardson’s pass over the middle and Smith intercepted it. Stetson Bennett, who started his fourth consecutive game in place of JT Daniels, found Kearis Jackson for a 36-yard score on first down.

Trailing 17-0, Richardson had Florida on the move before throwing a pass that Nakobe Dean picked off and returned 50 yards for a touchdown.

"It was just momentum swings," Smith said. "Anybody could have done it."

Getting turnovers was the Georgia’s lone weakness all season. Smart said an assistant coach ran down the statistics in the locker room and showed the unit it was in the top three in every category expect turnovers; the Dawgs were 68th.

"That offends our guys," Smart said. "I can’t say that’s why we got turnovers. But that challenged their pride."

The Bulldogs scored three times in 2:09. The last team to score three TDs in that little time at the end of a half was Utah State, which did it in a 52-26 win over Boise State in 2015.

"In the final third of the season, it’s on my to get this fixed," Mullen said. "And I certainly plan on doing that, of changing where we’re at right now."