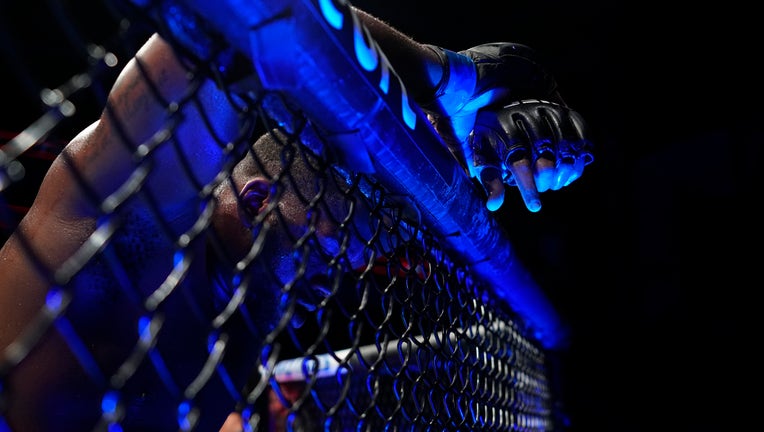 Walt Harris reacts after his TKO loss to Alistair Overeem in their heavyweight fight during the UFC Fight Night event at VyStar Veterans Memorial Arena on May 16, 2020 in Jacksonville, Florida. (Photo by Cooper Neill/Zuffa LLC via Getty Images)

JACKSONVILLE, Fla. - The UFC intends to stage a pay-per-view show in front of an arena full of fans on April 24 in Jacksonville, Florida.

UFC President Dana White announced his plan on social media Monday to stage an event in front of North American fans for the first time since March 2020. UFC 261 will feature three title fights, and the mixed martial arts promotion intends to sell 15,000 tickets to the show.

The UFC hasn’t fought in front of a full arena since the start of the coronavirus pandemic. The promotion welcomed a few thousand fans to three events on Yas Island in Abu Dhabi earlier this year, but its stateside events have been held without fans on its corporate campus in Las Vegas.

The UFC paused its near-weekly competition for only eight weeks at the start of the pandemic, returning to action with three shows at VyStar Veterans Memorial Arena in Jacksonville in May 2020. The fights were held there because Florida was among the few North American jurisdictions that would allow White to resume competition so early in the pandemic.

White repeatedly said he wouldn’t hold events in front of socially distanced, reduced-capacity crowds in North America. The UFC is now returning to Jacksonville apparently because its city government is willing to go along with White’s plans.

Earlier this month after UFC 259, White bemoaned the unwillingness of the mayors of several unnamed Texas cities to welcome his events with arenas full of fans even after Texas’ state government signaled its approval.

"This is a stacked card in front of 15,000 UFC fans," White said. "I just want to say thank you, Jacksonville. I love you guys, and we will see you soon."

Welterweight champion Kamaru Usman will have a rematch with Florida’s Jorge Masvidal in the main event of UFC 261. Valentina Shevchenko will defend her flyweight title against Jessica Andrade, and strawweight champ Zhang Weili will face former champion Rose Namajunas.

UFC 260 will be held in Las Vegas on March 27, headlined by Stipe Miocic’s heavyweight title defense against Francis Ngannou.