Downtown Orlando experienced flooding from Hurricane Ian. Several downtown-area lakes were flowing over their banks on Thursday including the city's iconic Lake Eola.

ORLANDO, Fla. - After leaving a trail of damage and devastation across Florida and downgrading to a tropical storm, Ian re-strengthened and became Hurricane Ian, a category 1 storm, Thursday afternoon, taking aim at the Carolinas and Georgia with life-threatening flooding, storm surge, and winds.

Late Thursday evening, Ian was located 180 miles south of Charleston, South Carolina, and about 260 miles south-southwest of Cape Fear, North Carolina. The storm had strengthened and was packing maximum sustained winds of 80 mph. 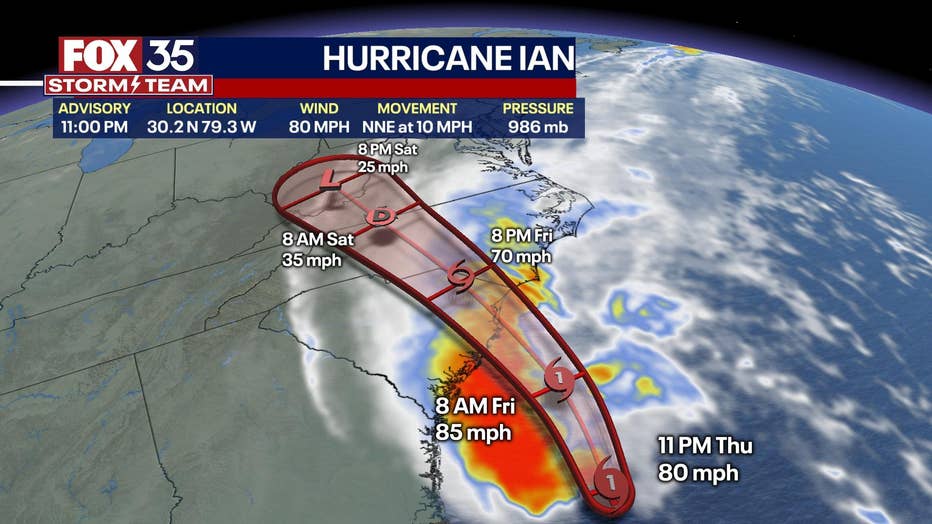 "Onthe forecast track, Ian will approach the coast of South Carolina onFriday.  The center will move farther inland across the CarolinasFriday night and Saturday," the National Hurricane Center said.

Forecasters say Ian could slightly strengthen before landfall Friday, and is forecast to rapidly weaken over the southeastern United States late Friday into Saturday.

Ian left a path of destruction in southwest Florida, knocking out power to 2.5 million people and causing at least one confirmed death — although authorities feared the toll could be far higher. Counties across Central Florida are now dealing with massive flooding and rescue efforts.