TAMPA, Fla. - A 10-year-old cancer survivor got to thank his idol, Tom Brady, for helping him beat brain cancer. The touching moment played out during Sunday night's Bucs game in Tampa when Brady caught up with the young fan after the game and gave him a hat to commemorate the moment.

It was an unforgettable moment for Noah Reeb.

When he got tickets to Sunday's game, he wanted to thank Brady in person so he made a sign reading, "Tom Brady Helped Me Beat Brain Cancer."

"Godwin came over saw Noah and was like 'I got you.' He read the sign. We watched him walk over and he talked to Tom and then Tom looked over and Noah held up the sign," Noah's dad, James Reeb said.

Brady came over to say hi, shook his hand, and gave him a hat. It was an unexpected and emotional moment for Noah and his family. 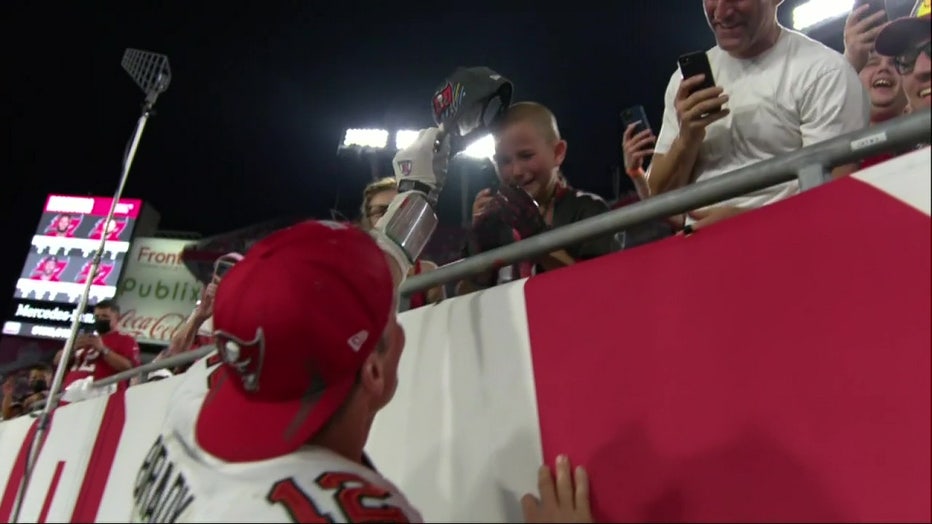 "I've kind of just loved Tom Brady and I've just always kind of followed Tom Brady," Noah said. "I was just so grateful. I was just so blessed. It was just amazing. I was in shock. It was crazy."

Two months ago, Noah was declared cancer-free. It was a moment of celebration he says his idol helped him reach. During intense chemotherapy and cancer treatments, Noah and his family say watching Tom Brady highlights helped take his mind off the pain.

"He's untouchable. We couldn't tell him ‘thank you.’ So for us, left it open-ended like we just want to say thanks and that was important, and we appreciate it, from one dad to another," Reeb said.

Mike Evans put Tom Brady's 600th touchdown ball into the hands of fans, but the fan who took the prized football agreed to give it back. Many wonder if he should have asked for more.

In March, Brady sent the family a video message after hearing about Noah's story. Noah could have never imagined he would get the chance to see him in person. His dad says they are forever grateful.

"He came over and he put that hat on the little head that has been the subject of so much pain, but wonderful blessings at the same time," Reeb said.

Along with the hat from Brady, several of the players gave Noah their gloves. Sunday's game was Noah's first-ever NFL game.