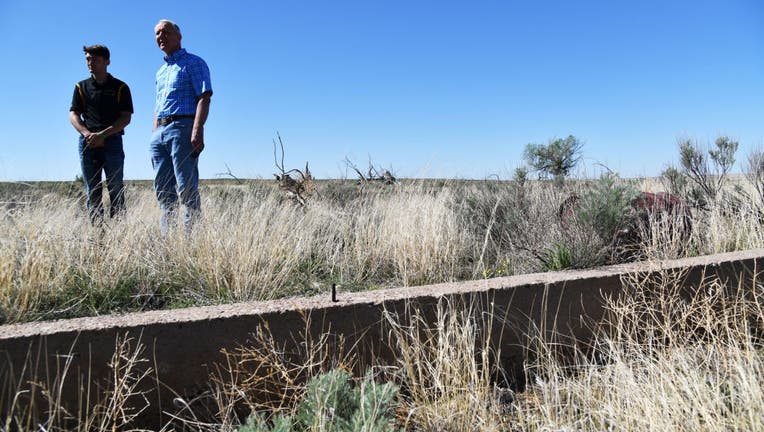 FILE - A student at Granada High School, left, explains the history of Camp Amache to Rep. Ken Buck at the campsite in Granada, Colorado, in a file image dated May 6, 2021. (Photo by Hyoung Chang/MediaNews Group/The Denver Post via Getty Images)

The U.S. Senate voted unanimously on Monday to pass the Amache National Historic Site Act, which would establish the Amache site near the town of Granada, Colorado, as part of the National Park System.

"Interning Japanese-Americans at Camp Amache is a dark stain on our past," Hickenlooper said in a statement, celebrating the Senate’s passage of the bill. "Elevating Amache to a National Historic Site will preserve the survivors’ stories and ensure that history never repeats."

History of the Amache site during WWII

Amache, which is less than one square mile, was one of 10 Japanese American internment facilities in California, Arizona, Wyoming, Utah, Arkansas and Colorado following the Japanese attack on Pearl Harbor in 1941.

"The attack on Pearl Harbor also launched a rash of fear about national security, especially on the West Coast. In February 1942, just two months later, President Roosevelt, as commander-in-chief, issued Executive Order 9066 that resulted in the internment of Japanese Americans," the National Archives states online.

Roughly 112,000 people were sent to "assembly centers" between March and August of 1942 and were later transferred to a long-term "relocation center" which would be their home for the rest of the war, according to the National Archives. Nearly 70,000 of the evacuees were American citizens, many of whom lost homes, farms, businesses and private belongings.

"There were no charges of disloyalty against any of these citizens, nor was there any vehicle by which they could appeal their loss of property and personal liberty," the website states.

One of these relocation centers was Amache, the camp’s unofficial name, where more than 7,000 people were forcibly imprisoned, according to the Amache Preservation Society.

This site, with the smallest population of the ten relocation centers, became the tenth-largest concentration of people in the state of Colorado and today is one of the best-preserved with intact foundations. It contains remnants of barracks, latrines, mess halls, military police structures and a cemetery.

Amache is currently a National Historic Landmark and is already listed on the National Register of Historic Places. It’s owned by the town of Granada and maintained by the Amache Preservation Society, established by John Hopper, a social studies teacher who is currently the principal of Granada High School. The society consists of volunteer students from the school.

Its current designation qualifies it for preservation funds, but designating it as a National Historic Site would make available additional federal funds through the National Park Service.

"Defacing any part of the national park or other public land you visit hurts, and it degrades the experience of other visitors," park officials said in a statement.

Earlier this month, Bennet said he had the support of 99 of the chamber's 100 senators to pass the Amache National Historic Site Act. But Republican U.S. Sen. Mike Lee of Utah had objected, who opposed adding new federal lands without adequate funding and in the past has advocated for "swaps" to prevent expanding federal land ownership.

On Monday, Bennet and Lee reached an agreement on the bill on the Senate floor — allowing it to pass unanimously shortly after. The final version of the bill now requires the NPS to accept the land as a donation from the town of Granada, according to Colorado Public Radio, which noted that the amendment will now require the bill to return to the House floor for final approval.

"I have waited many, many years to see the day where we can be certain that Amache, as a place of reflection, remembrance, honor, and healing, is protected for our current and future generations," Fuchigami said in a statement. "My parents did not live to see this day. The time is not only right; it is long overdue."

The bill’s approval also comes shortly before the 80th anniversary of Executive Order 9066 on Feb. 19, 1942, which led to the forced internment of thousands of Japanese Americans at the onset of WWII.