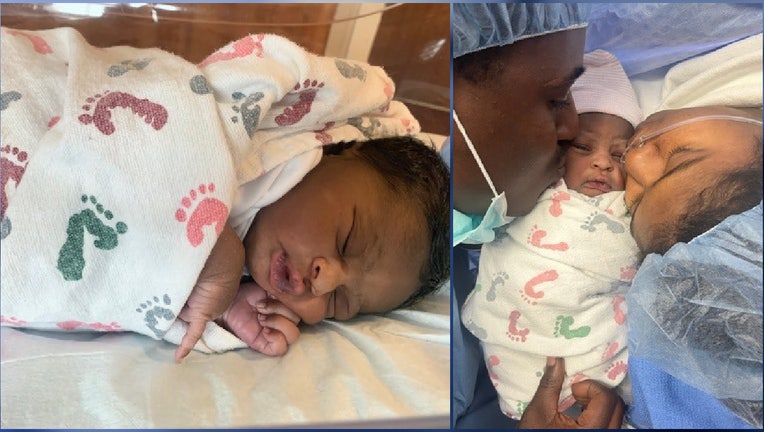 BREVARD COUNTY, Fla. - A Central Florida mother said she was dealing with "her own mental hurricane" when she and her family drove to a Melbourne hospital through Hurricane Ian's gusty winds and heavy rain to safely deliver their baby girl Wednesday – the same day the category 4 storm made landfall in Florida.

Hanna-Kay Williams, who began feeling contractions the day before, told First’s Holmes Regional Medical Center that she doesn't even remember the dark and gloomy drive. Williams, her fiancé and her mother drove to the hospital, arriving at 2 a.m. Wednesday.

Williams spent more than 20 hours in labor, but ended up having an emergency C-section since she wasn’t fully dilated, and the baby started going into distress.

The hospital said it was "their faith and family spirit that made them stronger through the procedure, while staying positive during severe weather," according to a news release.

We came out on top, we definitely did," Williams said. "I felt when she first arrive and they sat her on my lap, the first thing I said was, ‘that’s a big baby’ and then I looked at her and thought, ‘that’s my twin’ even though I already have a fraternal twin."

The baby girl, named Wajiha, was born Wednesday at 10:11 p.m., weighing 7 pounds and 13 ounces and measuring at 20 inches. "Her name means beautiful woman, glorious and she was phenomenal throughout the birthing process," Williams said.

Williams credits the hospital staff for creating a warm and welcoming birth experience, despite the severe weather outside.

Hurricane Ian made landfall shortly after 3 p.m. Wednesday, leaving a path of destruction behind in Florida on its way out the state toward the Carolinas.