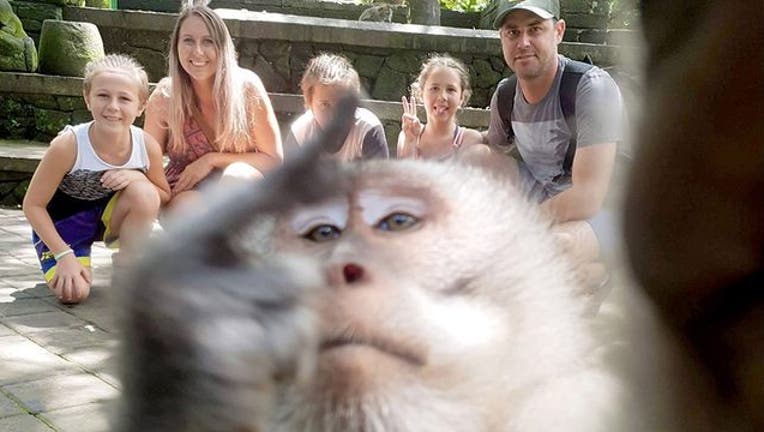 FOX NEWS - A photobombing monkey gave the one-finger salute to ruin a family holiday snap in a Bali forest.

The family of five, from Queensland, Australia, asked a guide to take their photo surrounded by the island’s native long-tailed monkeys.

They were surprised when one curious primate decided to take center stage, jumping in front of the camera just as they posed.

But when they looked at the picture, they saw the cheeky monkey had also given them the middle finger.

“While we were there, a guide offered to take our photo. But as he did, a monkey suddenly came in front of the camera. The guide had peanuts in his hand and then began feeding him. It was really funny.”

The picture was taken in December last year, but has been shared online for the first time this week.

“As I was flicking through the photos afterward, I noticed that in one of them the monkey was actually giving us the finger. I showed my husband and we both started laughing. We thought it was hilarious. The monkey definitely had a cheeky persona going on.

“We had such a great time there and these funny photos made it even better. I posted the photo to my Facebook and Instagram and all my family and friends thought it was hilarious. The experience was one of the highlights of our trip, and the photo itself is something we can look back on to remember forever.”

“Bali is such a beautiful place and we can’t wait to go back one day,” she added.

The long-tailed monkey is a species native to southeast Asia and has a long history of living at close quarters with humans.

A habit of stealing food has seen it labeled as a pest in some communities.

The Ubud Monkey Forest is a natural habitat-sanctuary, home to around 750 monkeys, and attracts 120,000 tourists a month.

This story originally appeared on The Sun. Read more content from The Sun here.