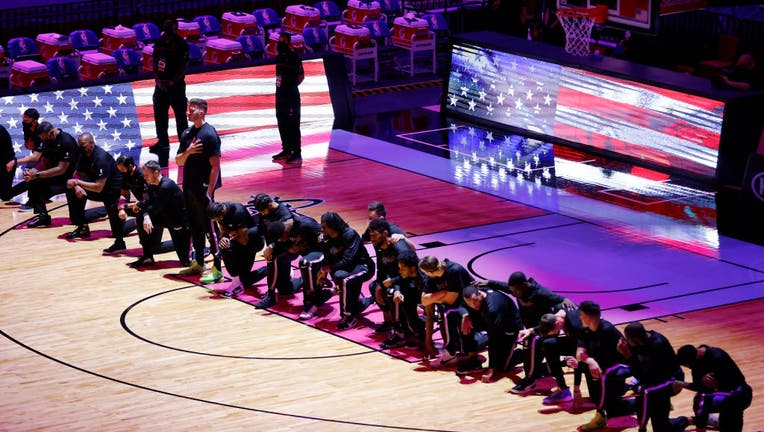 MIAMI, FLORIDA - JANUARY 06: Members of the Miami Heat kneel during the playing of the national anthem prior to the game against the Boston Celtics at American Airlines Arena on January 06, 2021 in Miami, Florida. NOTE TO USER: User expressly acknowl

Players from the Miami Heat and Boston Celtics took a knee during the national anthem before their game in Miami, after supporters of US President Donald Trump stormed the US Capitol building on January 6.

Following news of the chaos in Washington, both teams contemplated refraining from playing in the game, ESPN reported.

In a joint statement, the two teams announced they were playing with a "heavy heart". They said they eventually decided to go ahead "to try to bring joy to people’s lives."

"We play tonight’s game with a heavy heart after yesterday’s decision in Kenosha, and knowing that protesters in our nation’s capital are treated differently by political leaders depending on what side of certain issues they are on," the joint statement read.

On Monday, prosecutors declined to bring charges against the police officer who shot Jacob Blake in Kenosha, Wisconsin.

"The drastic difference between the way protesters this past spring and summer were treated and the encouragement given to today’s protestors who acted illegally just shows how much more work we have to do," the statement continued.

"We must not forget the injustices in our society, and we will continue to use our voices and our platform to highlight these issues and do everything we can to work for a more equal and just America."

Similar solemn gestures were expressed in basketball games elsewhere; in Milwaukee, Bucks and Detroit Pistons players kneeled together in a display of unity. In Phoenix, the Suns and Toronto Raptors linked arms and stood in a circle for the American and Canadian anthems.