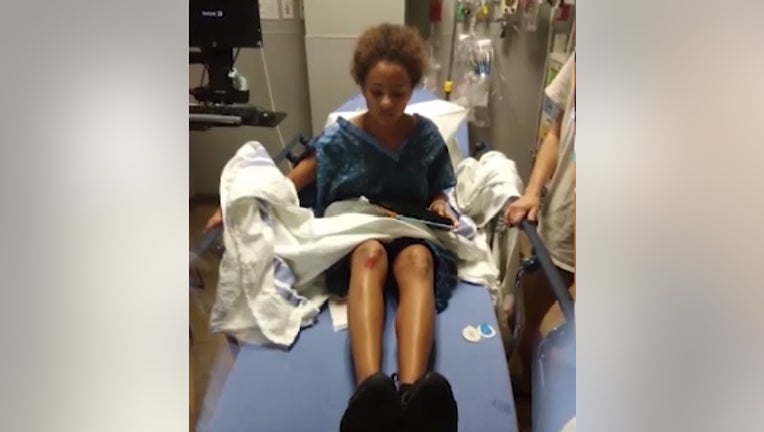 SANFORD, Fla. - A student is speaking out after deputies say she was beaten in school so bad it sent her to the hospital.

Now, she’s speaking out because she claims the school didn’t do enough to help her.

The eighth-grader says she was walking out of the bathroom at Millenium Middle School when a 13-year-old student pulled out her hair, shoved her to the ground and started stomping on her head.

RELATED: Mom says school did not do enough to protect her daughter who was knocked unconscious in fight

“I felt a yank to my head, and I went down,” Makayla McCants said. “The only thing I remember is feeling kicks to my head and that’s when I went out.”

According to deputies, the girl lost consciousness.

‘Kicks to my head’: Sanford student speaks out after school beating

A student is speaking out after deputies say she was beaten in school so bad it sent her to the hospital.

McCants was sent to the hospital after the fight on Wednesday.

Now, she’s home but says she doesn’t feel safe going back to school.

“I don’t have the words of how scared of that school I am right now,” McCants said.

Deputies said a 13-year-old student was charged with aggravated battery and disorderly conduct.

The teen claims the 13-year-old threatened to jump her the day before and she told school administration.

McCants said she’s now speaking out because she doesn’t feel the school took steps to stop her from getting hurt.

“I hate that school and I don’t like it. I don’t feel safe,” McCants said.

The Seminole School District told FOX 35 News that they are looking into the situation and McCants claims, but in the meantime, the teen and her mom say they’re looking for answers.

“I’m going to continue to do follow-ups with the school and try and figure out why the proper steps were not taken to protect her because it’s her this week, someone else next week,” McCants’ mom, Shannon Bean, said.