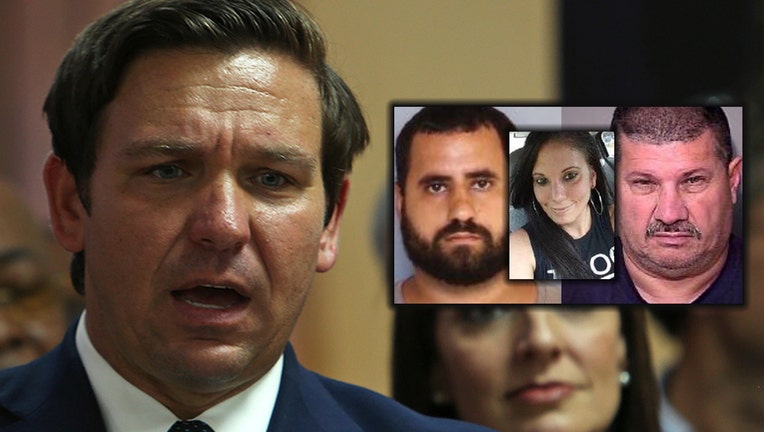 ORLANDO, Fla. - Governor Ron DeSantis said he met with the brothers of a murdered Florida mom as his office continues to review her case after a local sheriff and state attorney publicly clashed over how the case is being handled.

Nicole Montalvo was reported missing in October 2019. Deputies eventually began searching the property of a St. Cloud home on Hixon Avenue belonging to the parents of her child's father. This is where they found Montalvo's remains. Christopher Otero-Rivera, her child's father, and his father, Angel Luis Rivera, were arrested.

They have had a controversial time under custody, as prosecutors have failed to file murder charges against the two. In fact, Angel Luis Rivera was able to bond out of jail earlier this month. His bond was revoked days later and he is back in jail.

The state has filed a motion to revoke the bond of Angel Rivera, the father-in-law of murdered St. Cloud mother Nicole Montalvo.

He said that the Governor's Office is reviewing the case to see if they should get involved. They are communicating with the Sheriff's Office about this, but DeSantis said this process takes time. Nevertheless, he said that he is focused on the victim, protecting the public, and doing justice for the public and family. He also believes that this is a public safety concern because the murderer could do something else. He even has met with Nicole's brothers about the case and was able to listen to some of their concerns.

If it turns out that his office should get involved, they could assign the case to another prosecutor's office. That is just one of several actions that could be done but no decisions have been made yet.

This comes after a feud between Ayala and Gibson, in which Ayala blamed Gibson for making an arrest in the case before securing evidence needed to bring a murder indictment, saying that time is running out to file formal murder charges. Gibson reached out to Moody, requesting that the state intervene. Moody told both sides to get along and focus on justice for Montalvo.

A battle is brewing between Osceola County top law enforcement officer and the State Attorney for the Ninth Circuit Court. Now, the state is planning to intervene.

Governor DeSantis said that while he is not getting involved in the feud between Ayala and Sheriff Gibson and does not know what is going on between the two, the focus should be on the victim and her family.

“It’s about protecting the public and doing justice for victims and their families and that means I work with people that maybe I personally don’t care for but I’m not going to not work with them to the determent of the public,” Governor DeSantis said. “It’s not about personality at all. I’m not saying it is between them two, I don’t know what’s going on. I can tell you from our office we’re looking at it from a substantive perspective and we want to do the right thing on behalf of the people.”

When an announcement is ready to be made, DeSantis said that he will let the public know.