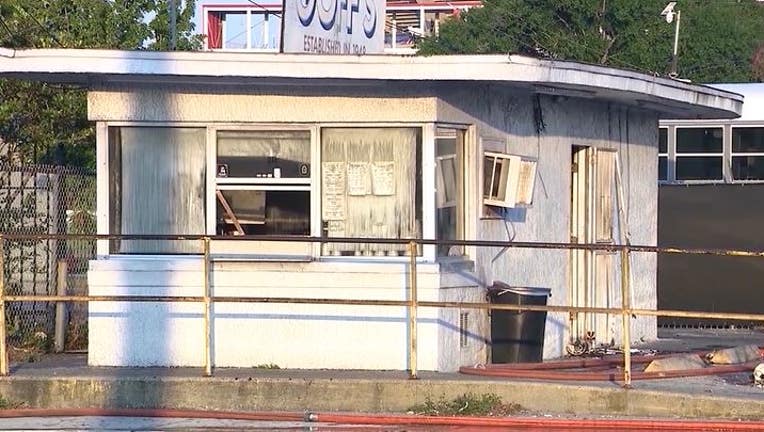 ORLANDO, Fla. -
An iconic ice cream shop in Orlando, that was the victim of a destructive fire earlier this year, will remain closed, though the owner is hopeful to reopen.

Goff's Drive-In, which has been a staple in the Orange County community for more than 70 years, has been closed since it caught fire and was heavily damaged on May 20.

Authorities said surveillance video recorded in May appeared to show someone setting the business on fire, before they were seen running away from the building seconds later. Authorities said they were able to collect evidence and DNA from the crime scene which led them to 58-year-old Alfred Jerome Kirkland.

Owner Todd Peacock told FOX 35 News he hopes to reopen the business at some point. "Orlando will always be home to Goff's and God willing, we will be serving Orlando's Finest customers, again," he said in the statement.

A fire on Friday caused heavy damage to the iconic Goff's ice cream shop in Orlando. The owner tells FOX 35 News that he will rebuild.

Edwin Goff first opened the shop's window on South Orange Blossom Trail, near Church Street, in 1948. Following Goff's retirement, the ice cream shop was left in the hands of Peacock's grandfather, William Truesdell, who agreed to not change the shop's name. After his grandfather's passing, his grandmother took it on before entrusting it to Peacock.

In a Facebook post Tuesday, Peacock shared that he planned to continue to shop's legacy and create more memories.

"My children’s plans were to one day continue what Mr. Goff started and what you, our extended Orlando family have helped build. But, we also have learned, try as we might, we are not in control. He is. And we have no choice but to trust His purpose for us," the post stated.

The statement continued, "This isn’t goodbye. This is see you later. We feel your love Orlando. And I hope you feel ours."