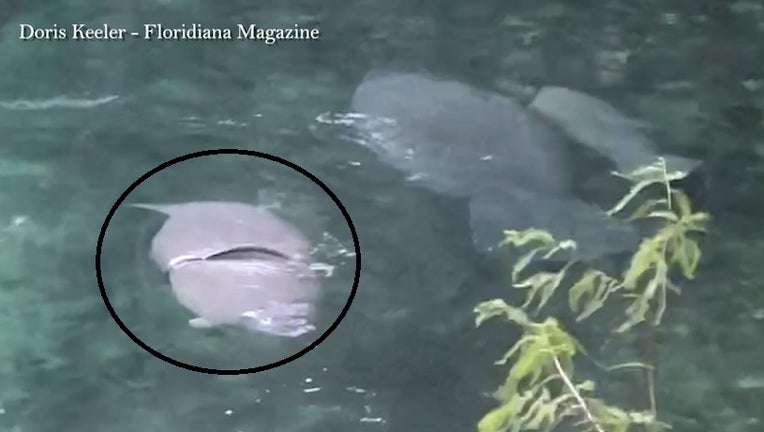 ORANGE CITY, Fla. - The manatee with a bicycle tire stuck around its body remains uncaptured days after rescue groups began their attempt to rescue him.

The Florida Fish and Wildlife Commission (FWC) confirmed to FOX 35 News that they will not search for the manatee on Wednesday. They said that they want to take the day to re-evaluate their strategy.'

On Tuesday, rescue groups managed to get the manatee, nicknamed 'Wheelie,' into a net with several other manatees. However, before they could officially rescue the animal, Wheelie escaped the net and swam off.

"When they were trying to get the other animals that weren't a concern out, the one with the tire got away," said Blue Springs State Park manager Michael Watkins.

Groups attempting to rescue a manatee with a bicycle tire stuck around its body from Blue Springs State Park said Tuesday afternoon that the manatee had not yet been captured.

Blogger Doris Keeler first spotted the manatee during a visit to the spring in mid-November. She posted pictures of the manatee onto her Floridiana Magazine social media pages. Quickly, many people showed concern for Wheelie, as the tire seemed to cut into the manatee's skin. Officials believe the manatee swam into the tire as a baby and grew larger with the tire still wrapped around it.

"The animal is continuing to grow and the tire's not," Watkins said, "it's embedding into the skin, it's getting too tight where it draws concern it could get infected and it's just not natural."

FOX 35 News was the first station at the scene on Monday, reporting about Wheelie as rescue groups attempted to track him. Several rescue attempts have been made since Keeler spotted the animal but none have been successful so far. Keeler hopes that at the very least, the photos of Wheelie encourage people to keep trash out of the springs.

“It’s enough to see the manatees with the scars on their backs from the boats but when you see something that’s a bicycle tire around it,” she said. “That’s what’s heartbreaking the most.”

Meanwhile, a beached manatee was rescued from Bunche Beach in Fort Myers, Florida. The male manatee was eight-feet long and weighed beteween 450 to 500 pounds. It has been taken to Seaworld for treatment.

A beached manatee was rescued from Bunche Beach in Fort Myers, Florida, on Tuesday, December 10.