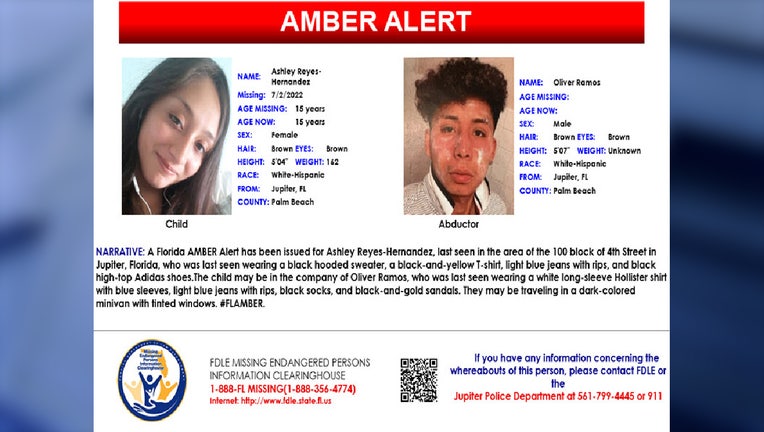 JUPITER, Fla. - An AMBER Alert issued for a 15-year-old Florida girl was canceled Wednesday morning after officials said she was found safe.

The alert was issued late Tuesday after the Jupiter Police Department said 15-year-old Ashley Reyes-Hernandez, of Palm Beach County, had been possibly kidnapped from her Jupiter home and taken out of state.

Reyes-Hernandez had been missing since Saturday, July, 2, and was believed to be in the company of a known acquaintance – 19-year-old Oliver Ramos.

STORY: Parents of boy found alone after Highland Park parade shooting were among those killed

Officers said they believed Ramos left Fourth Street in Jupiter with Reyes-Hernandez in a newer model dark minivan driven by an unknown female, along with an unknown male in the passenger seat.

According to police, Ramos has a history of verbal abuse, and they believed Reyes-Hernandez may be in danger. It's unclear where she was found, and if she was found with Ramos.

Both were believed to be in the Atlanta, Georgia area, the police department shared on Facebook.