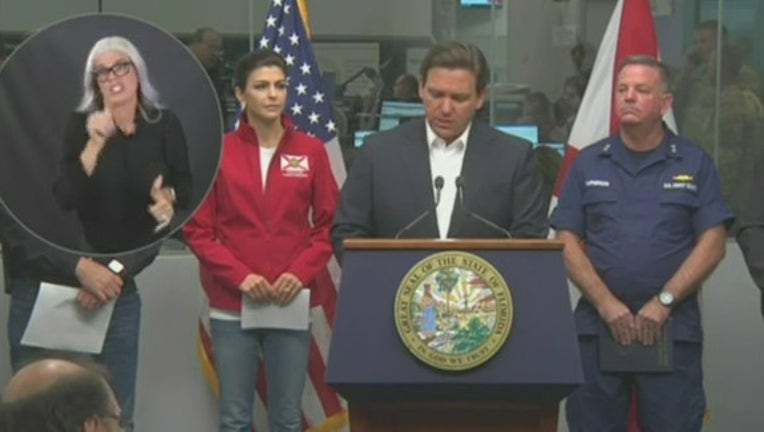 TALLAHASSEE, Fla. - Though downgraded from a hurricane, Tropical Storm Ian remained a threat Thursday to Central Florida and Northeast Florida, state officials said, after the massive storm brought destruction to the southwestern part of the state.

"The impacts of this storm are historic," Gov. Ron DeSantis said at a Thursday morning press briefing. "The damage that was done has been historic, and this is just (based) off initial assessments. There’s going to be a lot more assessing that goes on in the days ahead."

President Joe Biden early Thursday issued a major-disaster declaration, making federal assistance available to people in parts of Florida and providing help to the state and local governments with costs of debris removal and emergency-protective measures.

DeSantis said Ian caused unprecedented storm surge and flooding. The storm came ashore Wednesday in Lee and Charlotte counties as a Category 4 storm, and efforts were underway Thursday to identify and rescue people who remained in danger.

The governor said a death toll from the hurricane had not been determined. In a video clip that went viral Thursday morning, Lee County Sheriff Carmine Marceno said fatalities were "in the hundreds," with the sheriff also saying that he "cannot give a true assessment" until authorities get on scene.

DeSantis said "none of that is confirmed" when asked about Marceno’s comment.

"That estimate that was put out by Lee (County’s sheriff) is basically an estimate of, hey, these people were calling, the water was rising on their home, they may not have ended up getting through. So we’re obviously hoping that they can be rescued at this point," DeSantis said.

DeSantis said there had been two "unconfirmed fatalities" suspected to have been caused by the hurricane.

As of Thursday morning, the state had about 2.02 million reported power outages, with officials saying people in Central Florida and Northeast Florida should expect additional outages.

About 1.5 million of those outages were concentrated in seven Southwest Florida counties, DeSantis said.

"Lee and Charlotte (counties) are basically off the grid at this point," he said.

Boats destroyed by winds and surge in Fort Myers

FOX Weather's Robert Ray checks on damage at one of the marinas in Fort Myers, near where Hurricane Ian made landfall.

Some outages were expected to be lengthy, as electric systems will need to be rebuilt in the hardest-hit areas, according to DeSantis.

Florida Power and Light said Thursday morning it had restored power for half a million customers.

The storm crossed Central Florida and the state’s East Coast and was about 25 miles north-northeast of Cape Canaveral as of 11 a.m., according to the National Hurricane Center. But a tropical-storm warning remained in effect from Jupiter Inlet in Florida north to the coastal community of Duck, N.C.

The storm had maximum sustained winds of 70 mph, classifying it as a tropical storm, but was expected to regain speed over the Atlantic and become a hurricane again before curving west and possibly coming ashore in South Carolina.

While the storm was starting to head north, it continued to pummel Florida. A National Hurricane Center advisory at 11 a.m. cited a report of sustained winds of 53 mph at the St. Johns County pier in St. Augustin Beach. Also, storm-surge warnings were in effect for the St. Johns River and for the Atlantic coast from the border of Volusia and Flagler counties north to Little River Inlet in South Carolina.

Drone video shows the extent of flooding in Kissimmee after Hurricane Ian drenched the area during the overnight hours.

DeSantis warned that flooding is likely to occur "hundreds of miles from where this made landfall," with the potential for record-setting flooding in what the governor characterized as a "500-year flood event."

Guthrie pointed to "massive" amounts of rainfall in areas of Central Florida.

"Lots of rain in the area, lots of instant-action water rise. There’s a lot of lakes in Central Florida, especially in that Orlando-Kissimmee area. And it appears that these lakes were filling up and overflowing into the neighborhoods around them," Guthrie said.

DeSantis also warned of "potential major flooding" in Central Florida, including in Orange and Seminole counties, flooding of the St. Johns River, and flooding "all the way up potentially into Northeast Florida and Jacksonville."

"We’re going to see a lot of images about the destruction that was done in Southwest Florida, and obviously we have massive assets there. But people should just understand that this storm is having broad impacts across the state. And some of the flooding that you’re going to see in areas hundreds of miles from where this made landfall are going to set records," DeSantis said.

While the storm had passed through Southwest Florida, people in the region were being urged to stay off roads.

"Do not come in and tour the area for damage. We have (20,000) to 30,000 responders coming into the area that need access to those roads. Stay home. Do not get on the roads. Let the first responders and power crews have the roadways," Guthrie said.

State and federal officials continued working to coordinate response efforts, and Biden and DeSantis spoke on the phone Thursday morning.

Residents in Sarasota County in southwest Florida are picking up the pieces after Hurricane Ian made its way through the area, damaging homes and businesses, toppling vehicles, and knocking out power. The area felt the impacts of the storm when it made landfall Wednesday afternoon as a powerful category 4 storm.

"The president told the governor he is sending his FEMA administrator to Florida tomorrow to check in on response efforts and see where additional support is needed. The president and governor committed to continued close coordination," a summary of the call released by the White House said, referring to Federal Emergency Management Agency Director Deanne Criswell.

"Assistance can include grants for temporary housing and home repairs, low-cost loans to cover uninsured property losses, and other programs to help individuals and business owners recover from the effects of the disaster," the White House said.

The White House also said damage assessments were underway and the scope of the federal assistance could expand "once those are completed."