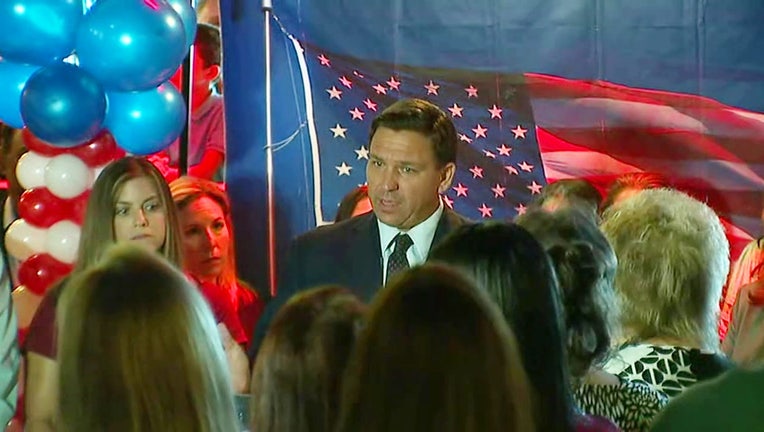 CAPE CORAL, Fla. - Florida Gov. Ron DeSantis on Friday signed an executive order barring local school districts from forcing students to wear masks when classes resume next month, even as the state's coronavirus cases and hospitalizations continue to skyrocket toward levels not seen since before vaccines became widely available.

The Republican governor said it should be up to parents to decide whether their child should be masked. He says he has seen no studies that show mask-wearing lowers the chance of outbreaks in schools.

"I have (three) young kids. My wife and I are not going to do the mask with the kids. We never have, we won’t. I want to see my kids smiling. I want them having fun," DeSantis said at a press conference in southwest Florida. He did not say when he would issue the order. DeSantis is seeking re-election next year and has been positioning himself nationally for a possible 2024 presidential bid.

His order comes after the Broward County school district in Fort Lauderdale this week voted to require masks and other districts and colleges around the state were considering it as the state's confirmed coronavirus cases have grown nearly tenfold over the last month. Florida is responsible for about 20% of the new cases reported nationwide over the last three weeks, even though it makes up 6.5% of the population.

On a per capita basis, Florida is second nationally in both new cases, behind Louisiana, and hospitalizations, behind Nevada. While rare, pediatric hospitalizations for COVID-19 are also increasing statewide, studies show.

"If (DeSantis) makes an emergency rule and we are not legally allowed to mandate masks, then we will have to change our policy," Broward board member Debbi Hixon told the South Florida SunSentinel on Friday. "I am not looking to defy the governor. I believe it is an irresponsible decision but if it is the law, I will agree to follow it."

The Florida Education Association, the state's teachers union, said DeSantis should leave the decision to local officials rather than impose a statewide edict — a position he once held. When the coronavirus outbreak began in March 2020, DeSantis had said local officials should control the pandemic response, that the strict mandates imposed on business closures and masks in Miami, Tampa and other big cities wouldn't work in small, rural counties.

"Gov. DeSantis continues to think that Tallahassee knows best what all Floridians need," union President Andrew Spar said in a statement. "We reject that kind of thinking. Instead, we ask Gov. DeSantis to allow all Florida’s citizens to have a voice by empowering the elected leaders of cities, counties and school districts to make health and safety decisions locally based on their unique needs and circumstances."

Florida will likely record more than 100,000 new cases over the past week, about where it was in January just as vaccines became available, said Jason Salemi, a University of South Florida epidemiologist who has been tracking the pandemic since shortly after it began. In late June, the state recorded about 10,000 new cases a week. The state health department will issue its official weekly report later Friday.

Salemi said pediatric hospital admissions for COVID-19 will likely reach 25 to 30 per day statewide in the coming week, up from an average of 23 last week. Pediatric hospitalizations have increased fourfold from a month ago.

The Florida Hospital Association says overall, statewide COVID-19 hospitalizations are nearing the record peak. Almost 8,900 patients were hospitalized on Wednesday, up from 1,845 a month ago and nearing the peak of 10,179 set on July 23, 2020.

Johns Hopkins University says 282 Floridians have died over the last week from COVID, up from about 210 in the last week of June. Deaths are the last number to rise significantly in an outbreak as the disease can take a month or more to kill. More than 38,000 Floridians have died of COVID since March 2020. The state's peak happened in mid-August 2020, when 1,266 people died over a seven-day period.