It’s been over a year since a 78-year-old woman was killed by a hit-and-run driver while walking her dog along John Young Parkway. Her daughter hasn’t lost hope in finding the person responsible.

ORLANDO, Fla. - It’s been over a year since a 78-year-old woman was killed by a hit-and-run driver while walking her dog along John Young Parkway. Her daughter hasn’t lost hope in finding the person responsible.

"I really just feel you should come forward and say what you did. You hit a person and just took off," said Tara Stiner, referring to the driver responsible for the death of her mother, Gayle Kelley. Kelley's puppy, Tucker, was also killed in the crash on June 4, 2021.

Troopers with the Florida Highway Patrol said Gayle was walking against the walk signal in a crosswalk off John Young Parkway and Hunters Creek Blvd. when the deadly crash occurred.

"I think Tucker got spooked, and she tried to reach out to save Tucker."

Surveillance video shows Kelly was walking from the west side to the east side of John Young Parkway when a dark-colored SUV struck them both.

"Every day it seems there is an accident somewhere and people need to slow down, they need to put their phones down, and they need to pay attention," Stiner said.  She is upset because of what she describes as the lack of communication and assistance from investigators.

According to troopers, no tips came in after the hit-and-run crash, but they continue to investigate.

"It’s a tragedy that we are still trying to put the pieces back together over a year, and it’s been tough," she said. 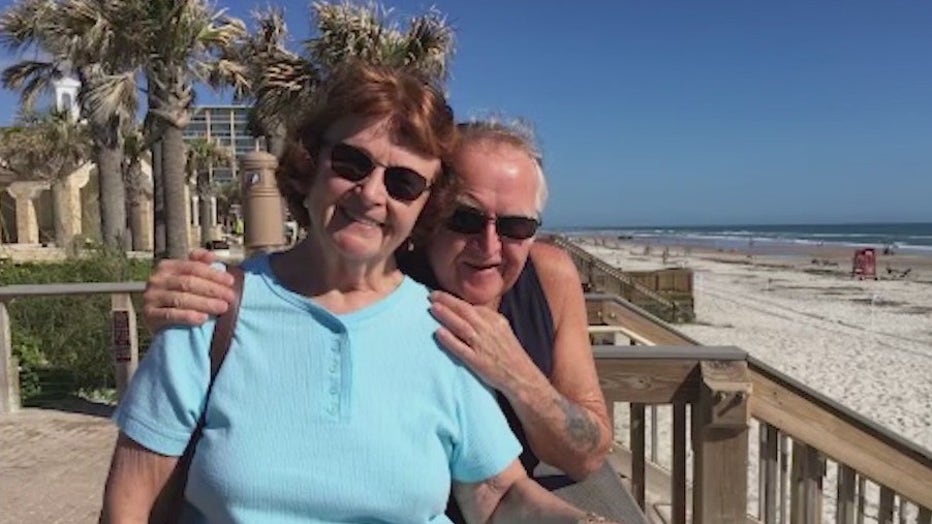 Kelly had just moved to the area after dealing with the death of her husband and Stiner's father, months before this fatal hit-and-run. Stiner said she believes everything happens for a reason. "They were married 50 years, they were soulmates.  This was God’s way of saying, put them together again."