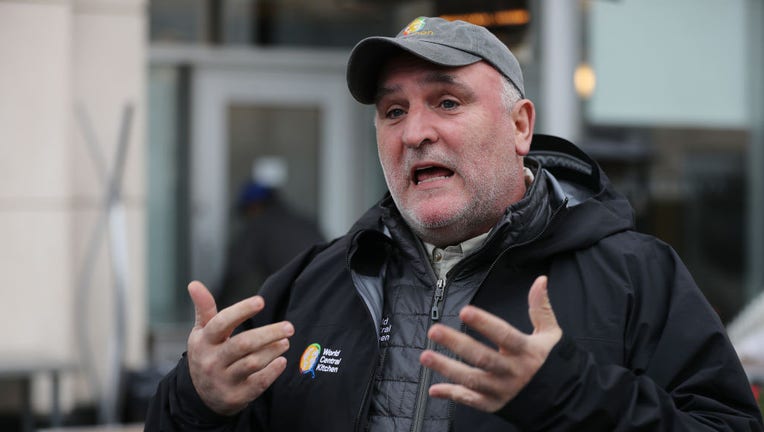 FILE IMAGE - Celebrated Chef Jose Andres talks to journalists about why he was converting Zaytinya into a grab-and-go meal restaurant in response to the novel coronavirus March 17, 2020, in Washington, D.C. (Photo by Chip Somodevilla/Getty Images)

As thousands of refugees from Ukraine continue to flee Russia’s military assault on the country, many sought opportunities to help those caught in the chaos — including famed Chef José Andrés and his nonprofit World Central Kitchen.

"It is below freezing tonight & I am meeting so many refugees, families who are escaping & don’t know what’s next…We will do our best not to let them down," Andrés wrote in a tweet on Sunday.

The celebrity chef with two James Beard awards, nearly three dozen restaurants and four Michelin stars, founded World Central Kitchen in 2010 and has served millions of meals on the front line of emergencies. Andres and his team were seen serving fresh meals over the week in multiple areas of the country, including people on the border of Ukraine and Poland.

"People of the World…Like you, I am distraught watching Ukraine under attack. We must come together as a force for good," Andrés wrote in a Feb. 25 Twitter post.

Andrés and his World Central Kitchen began its mission during the 2010 earthquake in Haiti. Recently, the team traveled to Kentucky to provide relief after deadly tornadoes left a trail of destruction.

"I cannot have my fancy restaurants and enjoy life and just stay home and watch TV when people are hungry and thirsty," Andres previously told The Associated Press in 2019, fresh from nearly three weeks of distributing food and clean water in the Bahamas after Hurricane Dorian.

The U.N. refugee agency said Sunday that about 368,000 people have fled Ukraine, many into bordering nations like Romania, Poland, Hungary, Moldova, and Slovakia. At Romania's Siret border crossing, where thousands of Ukrainians have entered, government workers raced to distribute basic amenities donated from all across the country.

Several other businesses and volunteers were pooling resources to provide the refugees with everything they need. In Poland's southeast city of Przemysl, just a few kilometers from a border crossing with Ukraine, hundreds of people waited in a parking lot to help refugees who were being bussed in from the border by authorities.

"I am very happy that I have come and I want to thank all the people who are organizing this," a young Ukrainian girl, who had just arrived, told the Associated Press. "This feels really nice that people are waiting for us in your country."

Moldova, which shares a long border with Ukraine, is also seeing a massive influx of refugees. Authorities said that since Thursday, 70,080 Ukrainian citizens have entered the small nation of about 3.5 million.

The Russian military assault on Ukraine went into its fifth day on Monday after Russian President Vladimir Putin ordered his nuclear forces put on increased alert, ratcheting up tensions yet further.

Ukrainian troops had slowed Russia's advance on key cities for the time being — while a Ukrainian delegation arrived at the border with Belarus for talks with Russian officials, though prospects looked uncertain at best.

European Union defense ministers were also to meet, to discuss how to get weaponry they have pledged into Ukraine.