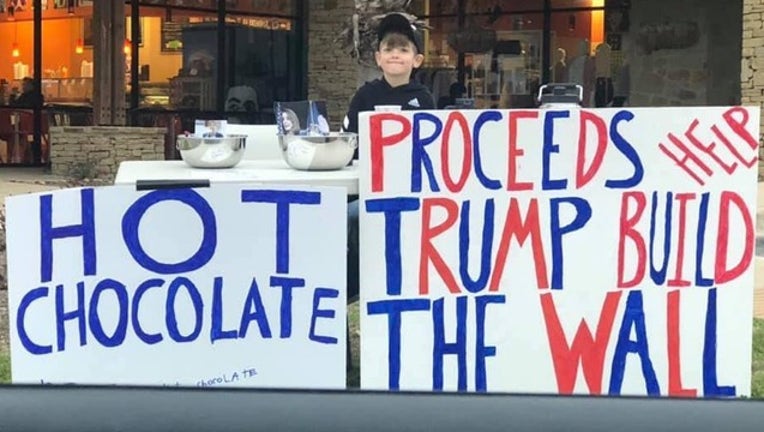 AUSTIN, Texas (FOX 35 ORLANDO) - 7-year-old Benton Stevens from Texas has raised $22,000 for the construction of a border wall between the United States and Mexico. He intends to continue to raise money with a lemonade stand this summer.

It all started with President Donald J. Trump's State of the Union Address. Benton's mother, Jennifer, told Fox 35 that Benton decided to start raising money for the border wall construction after President Trump said that we needed to protect our country and a build a wall.

"Benton decided right then and there that he wanted to help the President build the wall," Jennifer said.

It took two weeks of begging his parents to allow him, but Benton started up his hot chocolate stand in February 2019 inside his family's community. Jennifer said that some neighbors were supportive, while others were not impressed.

"There were more supporters than there were non-supporters. However, the neighbors against it were pretty harsh, calling him names, telling Shane and I that were teaching our son to hate, calling us racist," Jennifer said. "One guy even pointed at Benton and called him little Hitler."

Despite this, Benton continued to raise money through his hot chocolate stand. He now also has his own lemonade and hot chocolate brand that can be found online. He has raised about $22,000 for the border wall construction.

Jennifer said that Benton's efforts are not political to him. She said that "to him, he is supporting our President to make our country safer. He doesn't understand why everybody wouldn't want to do the same."

With summer approaching, Jennifer told Fox 35 that Benton wants to make some new signs and sell his lemonade from a stand this summer.