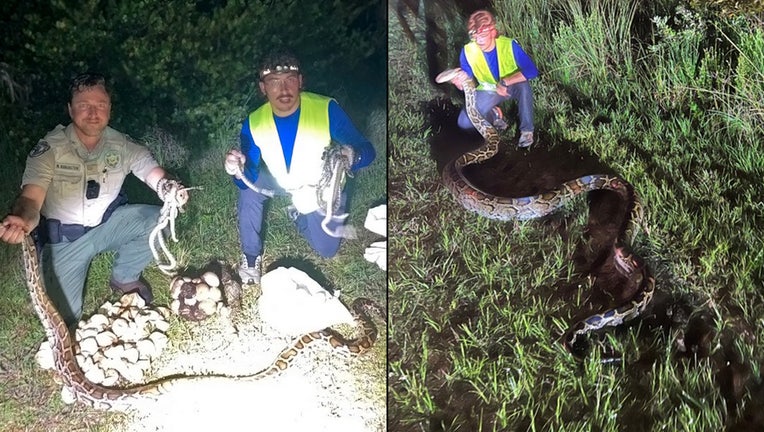 OCHOPEE, Fla. - A Florida Fish and Wildlife Commission (FWC) officer and a python contractor came across a slithery surprise recently: two giant female pythons and dozens of eggs and hatchlings!

FWC says Officer Matthew Rubenstein was on patrol on Monday at Big Cypress National Preserve when he assisted a snake trapper in removing a large number of invasive Burmese pythons from the area.

Alex McDuffie was trying to catch and bag a freshly hatched Burmese python when he began searching for more in the area. That's when he, along with Officer Rubenstein, came across a female Burmese python on a nest containing 23 unhatched eggs and 18 additional python hatchlings. A separate nest was found nearby, but no snakes were present.

The next night, McDuffie returned to the same site and removed a second breeding female python, which measured 17-feet, 6-inches long!

TRENDING: Snake slithers on woman's windshield as she drives on Kansas highway

Photos show the brave men surrounded by python eggs and holding up the hatchlings and their giant mamas.

All the snakes and unhatched eggs will be turned over to Big Cypress National Preserve.

Last month, Gov. Ron DeSantis opened up registration for the 2022 Florida Python Challenge. Hosted by the Florida Fish and Wildlife Conservation Commission and the South Florida Water Management District, the challenge is part of an effort to help protect the Everglades habitat and the animals that call it their home, from invasive Burmese pythons.

Those who participate in the python removal challenge are eligible for cash prizes. For those who capture the "most pythons, you get $2,500 grand prize. The longest python, $1,500 grand prize, and we're also providing additional prizes for military and veterans who will participate," the governor added.

The event begins on Friday, Aug. 5 at 8 a.m. and ends Sunday, Aug. 14, at 5 p.m. To sign up, or for more information, visit www.flpythonchallenge.org.