While clouds will dominate the skies and high rain chances will follow not too far behind, highs will still reach up to near 90 near Orlando on Monday, with it being a touch cooler near the beaches. 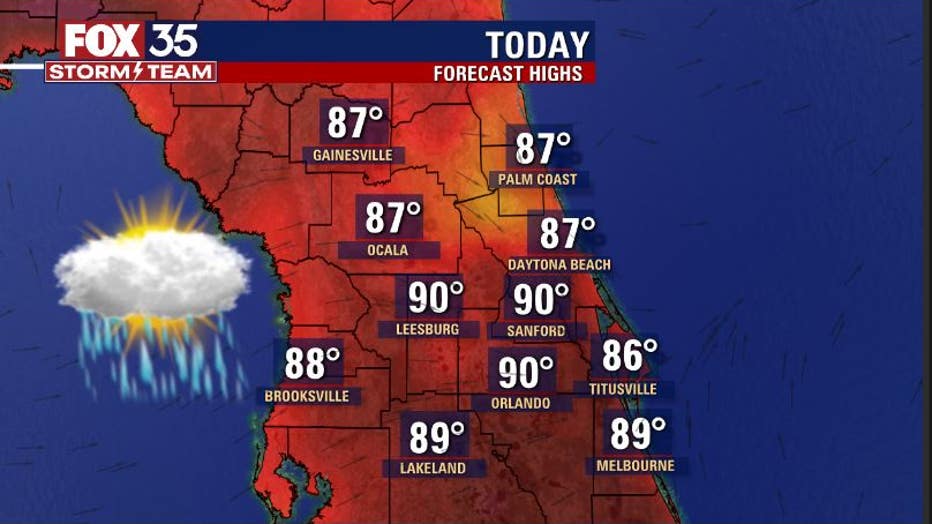 Rain chances will be present during the morning, afternoon, and evening. The highest coverage will be found after 12 p.m. as showers and storms continue developing in Central Florida's very soupy airmass. As of right now, coverage stands at a stout 70 percent or more across the region.

The latest forecast modeling reveals a very active afternoon from north to south. Heavy rain, lightning, gusty winds, and some localized, brief flooding could be in the cards as a few stronger storms develop. Central Florida will see wet weather so be mindful of rapidly changing skies as storms approach. 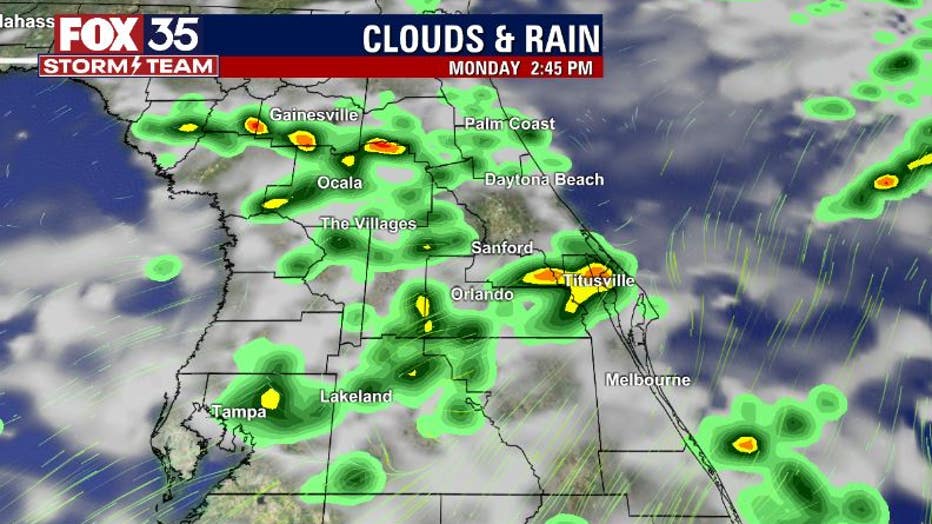 The Storm Prediction Center has outlined Northeast Florida with a marginal risk for severe storms on Tuesday. 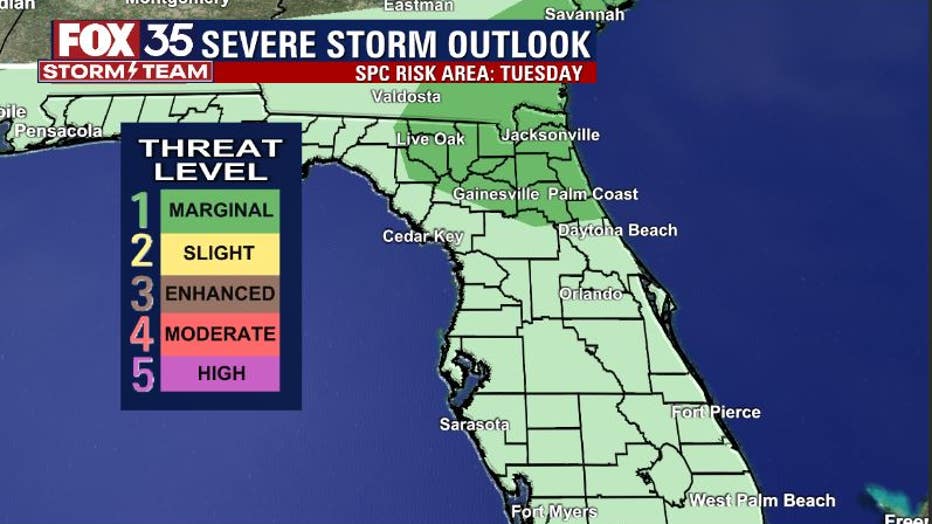 Stronger storms developing in this specific area on Tuesday afternoon could produce a few damaging wind gusts and perhaps an isolated brief tornado. We will track it all for you in the FOX 35 Storm Center. Be sure to download the FOX 35 Storm Team Weather App for alerts straight to your phone.

Meanwhile, in the tropics, the National Hurricane Center (NHC) said is monitoring a tropical depression near the Carolinas, a tropical wave off the coast of Africa, and a developing area of showers and thunderstorms near Central America.

The NHC said that Tropical Depression Two has formed about 105 miles east of the North Carolina coast.

They said that it is moving toward the northeast near 21 mph and has maximum sustained winds of 35 mph. It is expected to continue with this motion through Wednesday with increasing forward speed.

The depression is expected to become a tropical storm by Monday night, becoming our second named storm of the season: Bill. From there, forecasters believe it will continue to strengthen on Tuesday and then dissipate on Wednesday while moving away from the United States.

The NHC said that a strong tropical wave has formed just offshore of West Africa.

It is said to be producing disorganized showers and thunderstorm activity. Some development is possible during the next few days but a dry air aloft and strong upper-level winds limit any chance of formation while the wave is over the central tropical Atlantic Ocean later in the week.

They added that the tropical wave only has a 20 percent chance of development over the next five days. 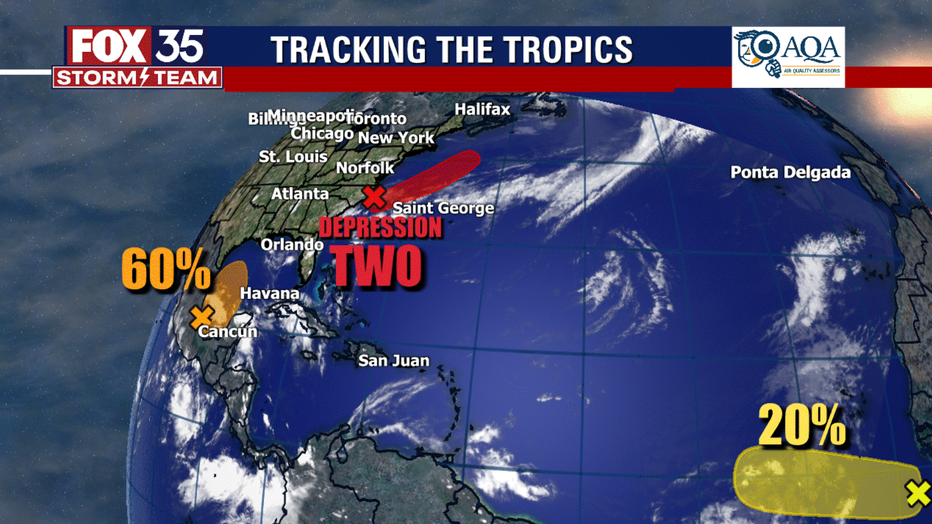 Then, forecasters said that there is a broad low-pressure area over the Bay of Campeche that is gradually developing and now has a 60 percent chance of development over the next five days. It could become a tropical depression later in the week while moving northward into the central Gulf of Mexico.

Regardless of development, this broad low-pressure area of showers and thunderstorms will reportedly bring rain to portions of Central America and southern Mexico over the next several days.

After Bill, the next two named storms in the 2021 Atlantic hurricane season are Claudette and Danny. 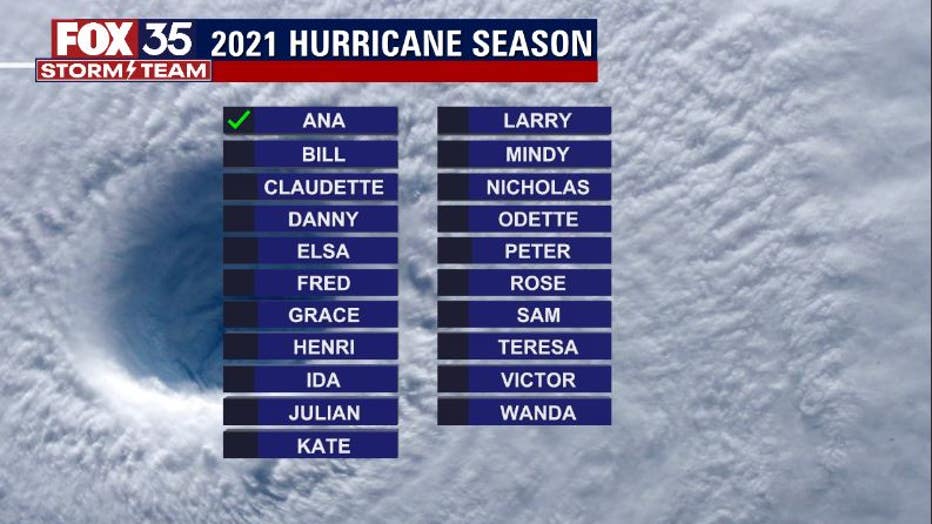 Watch FOX 35 Orlando for the latest weather updates from the FOX 35 Storm Team.