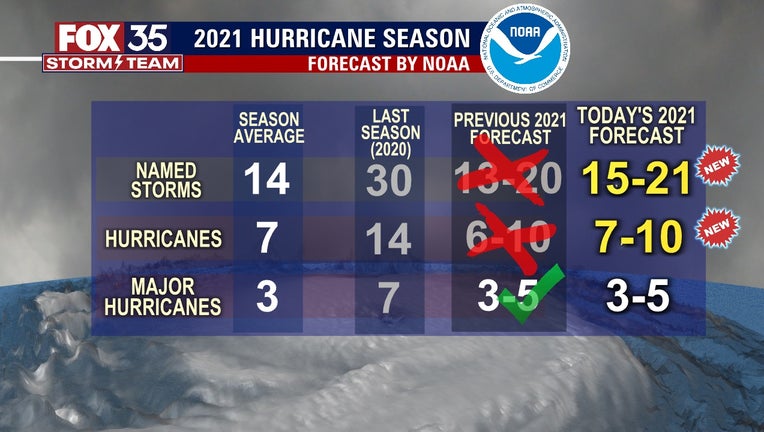 ORLANDO, Fla. - NOAA updated its outlook on the 2021 Atlantic Hurricane Season on Wednesday, maintaining that it will be an above-average season.

They predicted 15 to 21 named storms are possible, with seven to ten becoming hurricanes and three to five of those becoming major hurricanes, meaning Category 3 or higher.

"After a record-setting start, the 2021 Atlantic hurricane season does not show any signs of relenting as it enters the peak months ahead," said Rick Spinrad, Ph.D., NOAA administrator. "NOAA will continue to provide the science and services that are foundational to keeping communities prepared for any threatening storm."

"A mix of competing oceanic and atmospheric conditions generally favor above-average activity for the remainder of the Atlantic hurricane season, including the potential return of La Nina in the months ahead," said Matthew Rosencrans, lead seasonal hurricane forecaster at NOAA’s Climate Prediction Center.

Reduced vertical wind shear and an enhanced west Africa monsoon reportedly all contribute to the current conditions that can increase seasonal hurricane activity.

"Now is the time for families and communities to ensure their preparations are in place," said National Weather Service Director Louis W. Uccellini, Ph.D. "These storms can be devastating, so be prepared for all possible outcomes by staying tuned to the forecast and following safety information and possible evacuation notifications issued by emergency officials."

So far this season, the Atlantic has had five named storms: Ana, Bill, Claudette, Danny, and Elsa. All of them reached tropical storm status, with Elsa becoming a hurricane at one point.

RELATED: NHC: Tropics show signs of life with 3 systems in the Atlantic 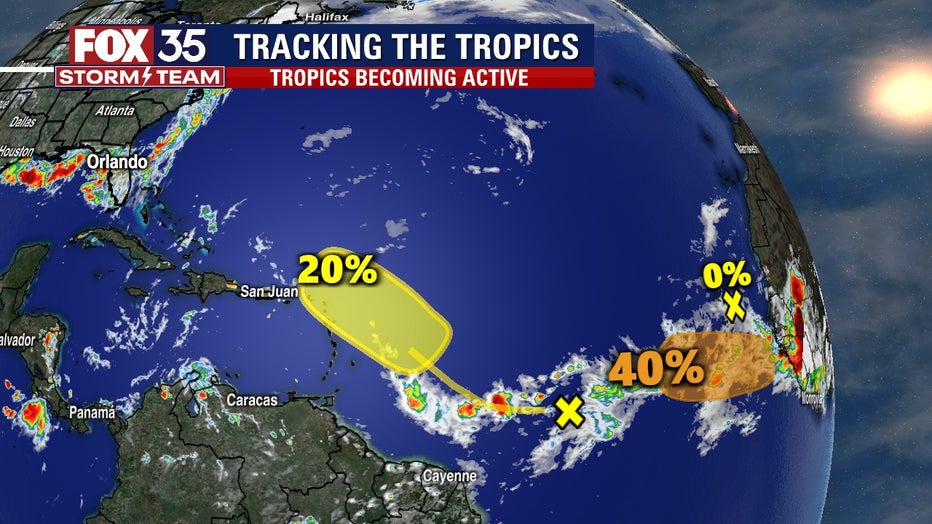 The first area stands only a 20 percent chance of development over the next few days. It's located near the Cape Verde Islands. Little if any movement with this wave over the coming days.

The second area is tied to an area of showers and storms moving off of Africa and into the Atlantic late this week. The five-day outlook on this feature stands at 40 percent as it rides in a general westerly motion across the Tropical Atlantic.

There was also a third feature being tracked earlier on Wednesday near the Islands of the Eastern Caribbean, but its chances of development have since dropped to zero percent.

September 10th marks the peak of hurricane season. Atmospheric conditions will continue to become more favorable for tropical development over the coming weeks. Now is a good time to review your hurricane/storm plan for you and your family. Make sure you are well stocked with everything you will need should we experience a storm here in Florida.

Depend on the FOX 35 Storm Team for the latest updates on the 2021 hurricane season.