A line of storms producing tornadoes in Marion and Seminole counties early Monday.

ORLANDO, Fla. - A line of storms that passed through Central Florida on Monday brought with it heavy rainfall, damaging winds, and tornadoes.

A front that produced tornado warnings in the Florida Panhandle earlier in the morning quickly moved across the state to North Central Florida.

"The powerful jet stream winds punched into the line of storms, starting at 9:30 a.m. and continued until 1:30 p.m.  This 'punch' provided the energy and the lifting mechanism to produce the tornadic environment," said FOX 35 Chief Meteorologist Glenn Richards.  "This also enabled the storms to move quickly to the east and hold together." 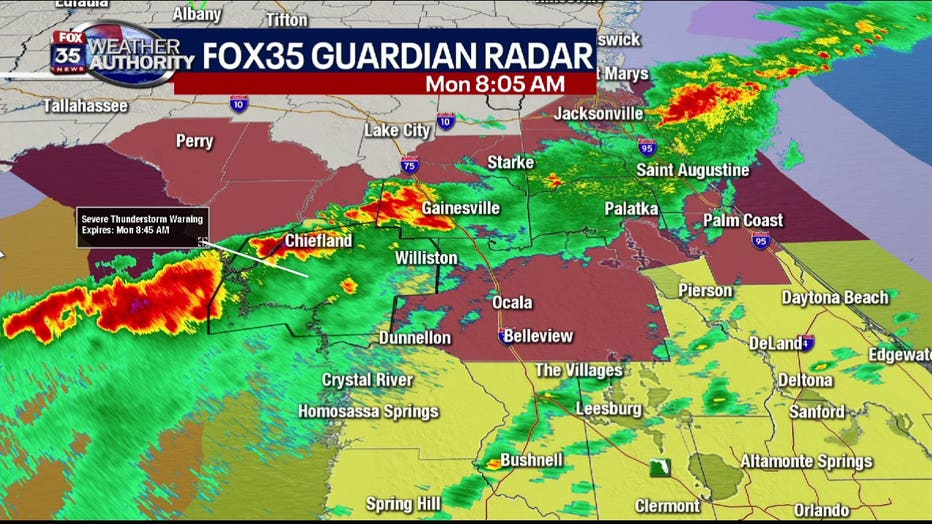 The National Weather Service (NWS) confirmed late afternoon that a tornado touched down near the Ocala weigh station along Interstate 75 near mile marker 340 just before 10 a.m.  Authorities said the tornado lifted a stationary construction trailer across the roadway and snapped numerous trees. 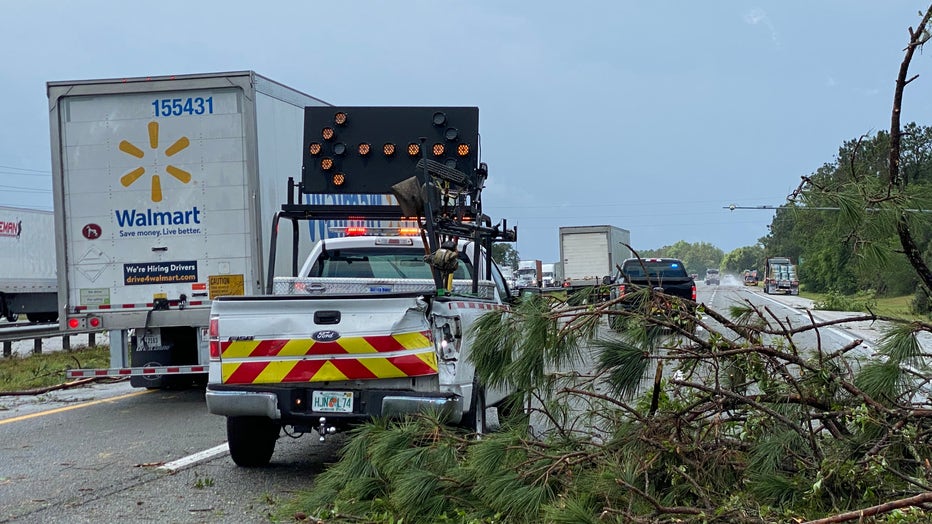 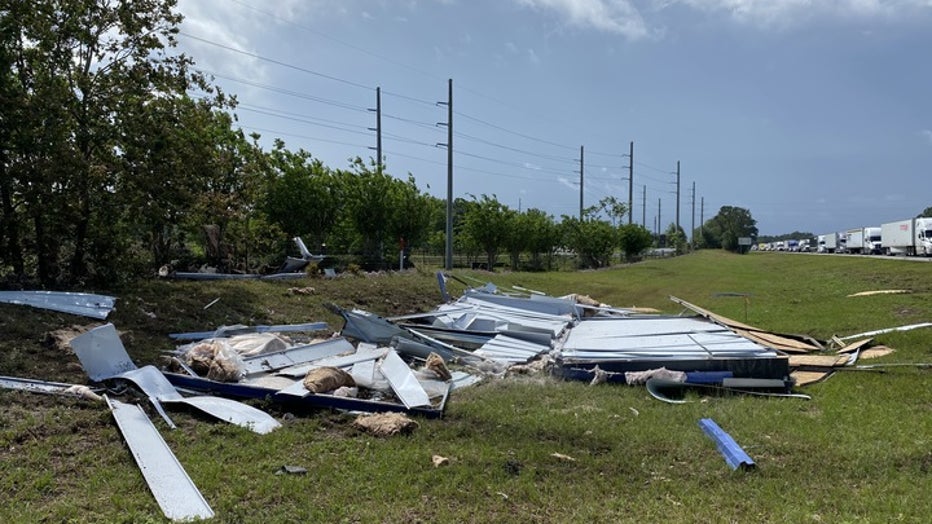 The tornado raced eastward where it produced minor roof damage to homes near Silver Springs Shores.  It also knocked down fences and brought down trees. The NWS has classified the tornado as a weak EF-0 (65 to 85 mph).

The line of storms moved eastward into Lake County where additional damage was spotted by FOX 35 News crews in Tavares. 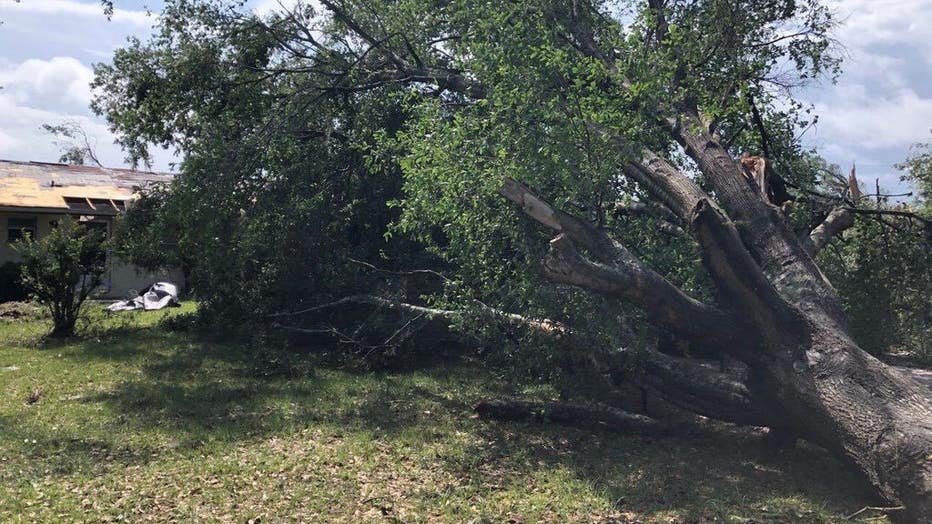 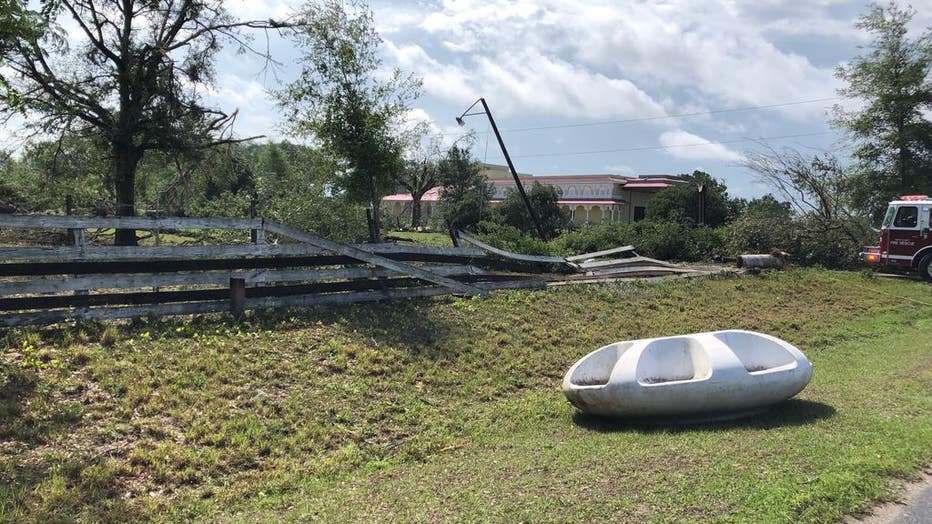 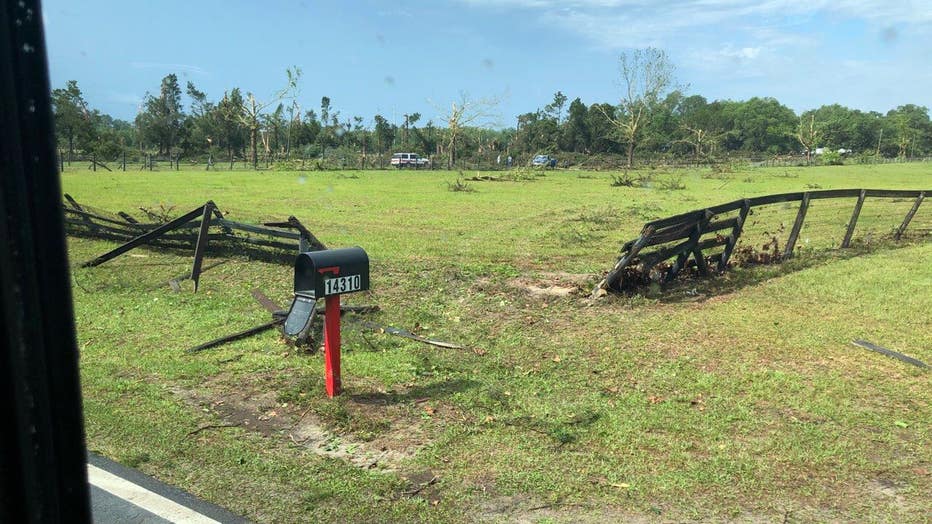 As the imclement weather approached the Orlando metropolitan area, there were reports of trees down in Volusia County, near the intersection of Walts Ave. and Thompson Ave.  FOX 35 News crews were on scene as cleanup began.

"Looked out the window. I couldn’t even see anything, because it was raining so hard,” said Asia Gibson, describing the intense weather. “It sounded like it was in the house, it was so loud.”

The City of DeLand caught footage of the system moving through on its security system.

“We were up on the third floor in City Hall and within a matter of seconds it was white out conditions you couldn’t see a thing,” said spokesperson Chris Graham.

Graham said the city used its new Alert DeLand system, which was intended for hurricane season.

“But it turns out we had one tornado this year, and a potential one we just had today,” he said.

The National Weather Service will be out in the area Tuesday to determine if it was a tornado that moved through.

In Seminole County, authorities spotted funnel clouds, including one that FOX 35 Guardian Radar tracked near the Orlando Sanford International Aiport, south of the Boombah Sports Complex.

"In examining the Seminole County tornado, our radar recorded a 37-mile-long intermittent track," said Richards.  "The red area shows when the rotational shear was greatest and when the tornado was likely touching down." 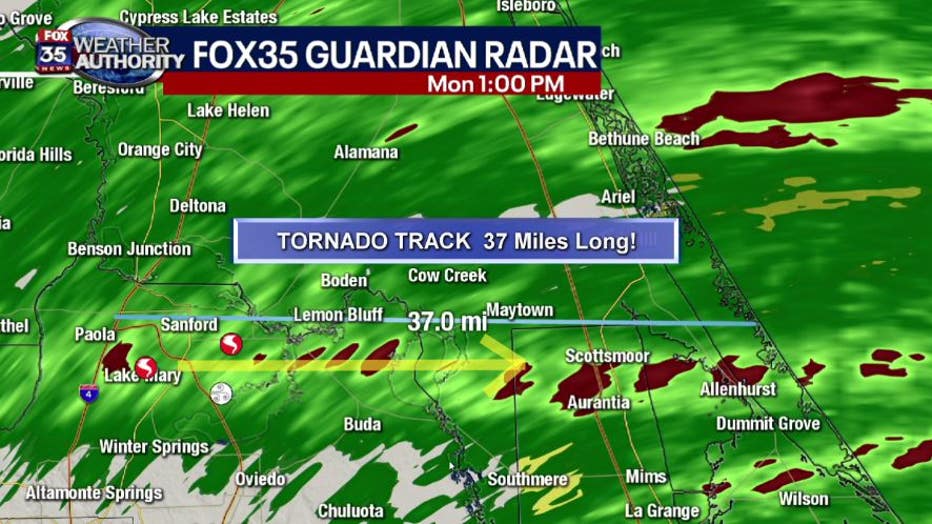 The funnel cloud was spotted by many FOX 35 viewers from different perspectives:

Tasha Mieses took this video as storms pushed through Central Florida on Monday.

A funnel cloud was spotted in Seminole County late Monday morning. This is footage posted by the Orlando Sanford International Airport.

FOX 35 News is surveying damage in Seminole County.  Most have reported downed trees and fences.  We spotted an overturned trampoline in one neighborhood near the storm's track. 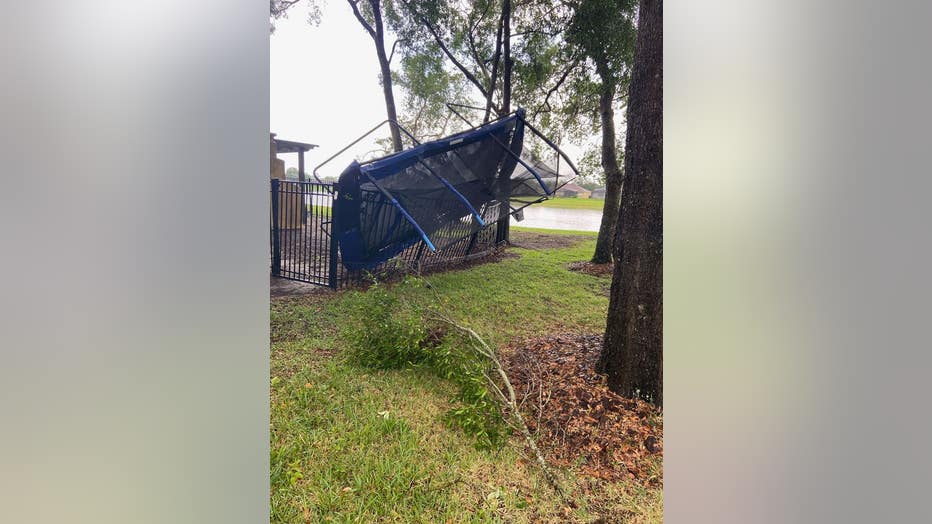 "An unfortunate perfect storm of weather conditions came together from 9 a.m. to 2 p.m., which caused several storms to become tornadic with damaging winds.  I was pleased to see everyone recognize our FOX 35 Weather Alert Day and take precautions prior to the arrival of these storms," Richards added.

Duke Energy reported power lines down in several areas in Lake and Volusia counties. Florida Power & Light responded to downed power lines in Ocala. Most power had been restored by late Monday afternoon.

The heat returns over the next few days with highs in the upper 80s to lower 90s.  Rain chances begin to improve on Thursday and it will intensify as we approach the weekend with possible severe weather on Friday and Saturday.

Download the FOX 35 Weather App to receive these updates, live radar, and more on your phone.

A FOX 35 viewer, Don Lewis, shared photos with us of storm damage in Ocala. 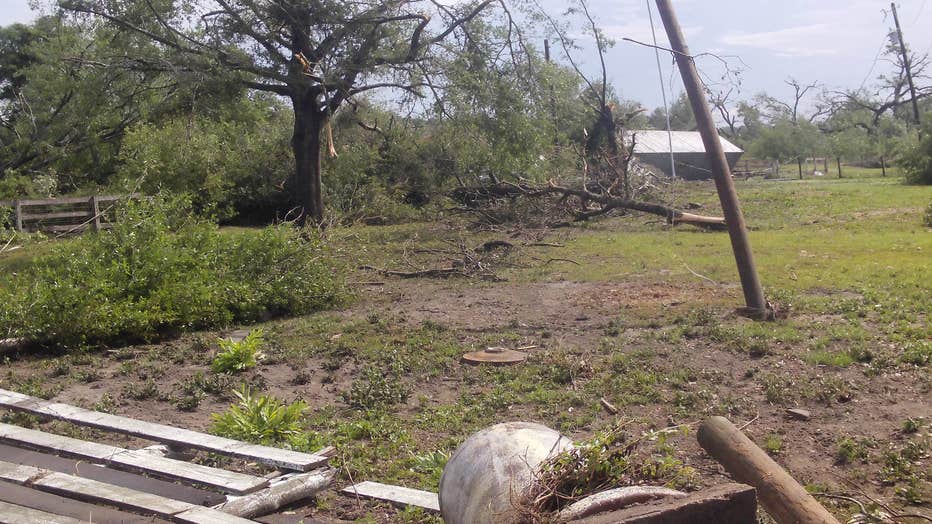 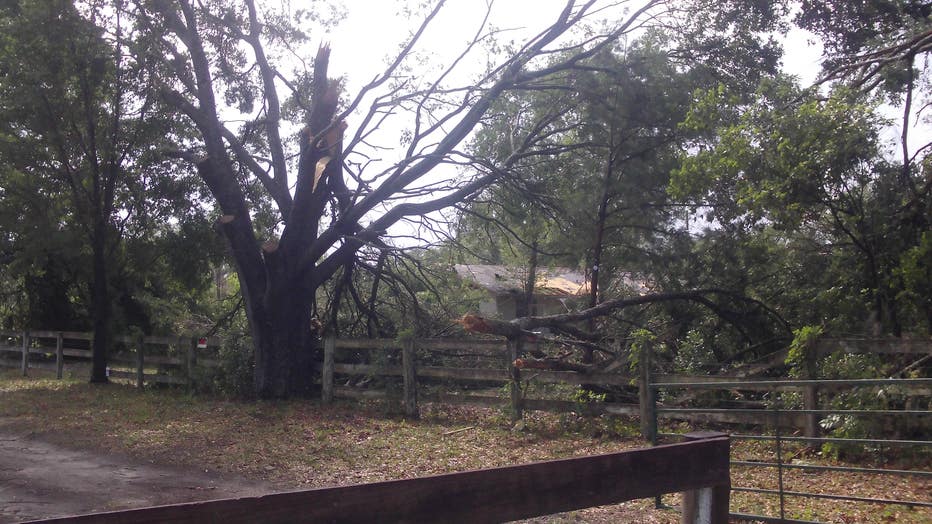 The City of DeLand also posted photos of storm damage. 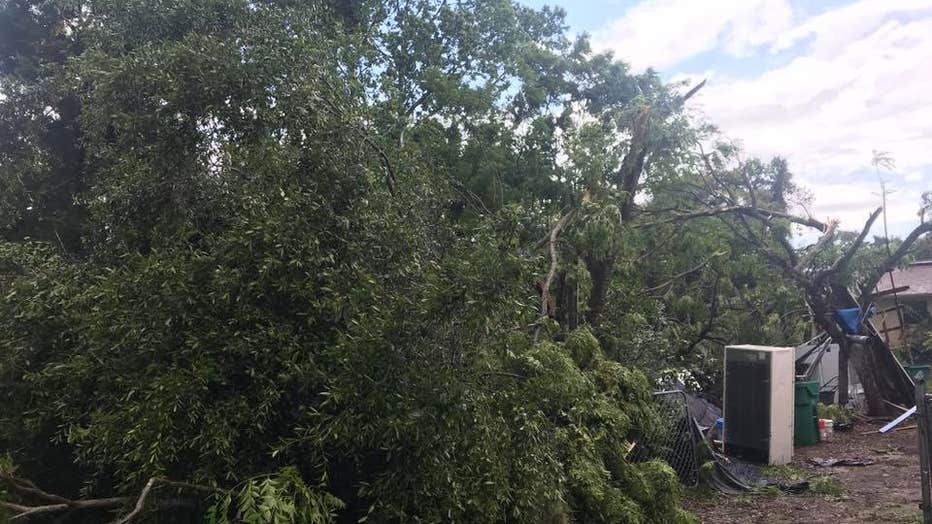 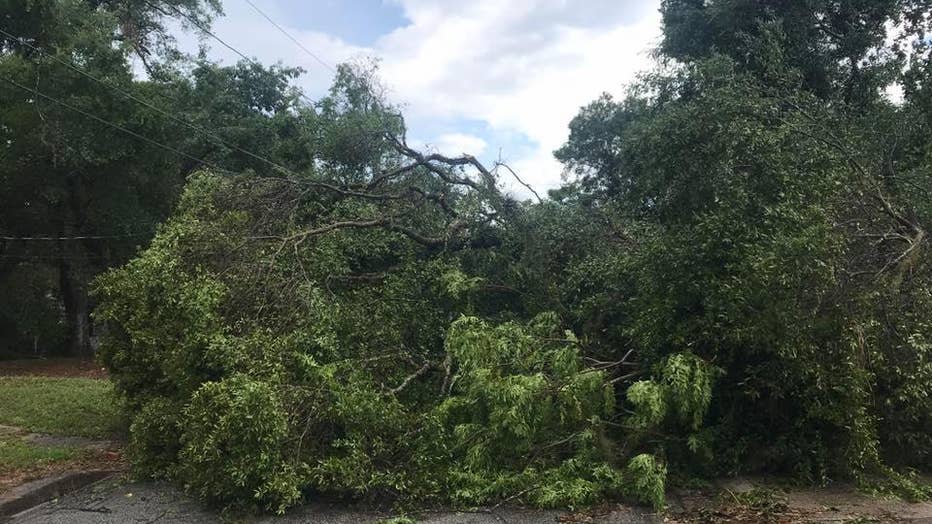 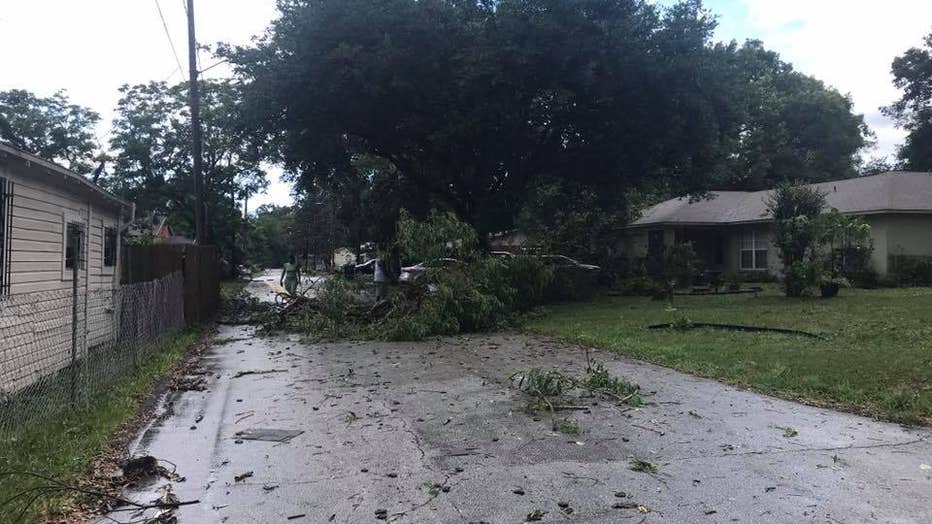 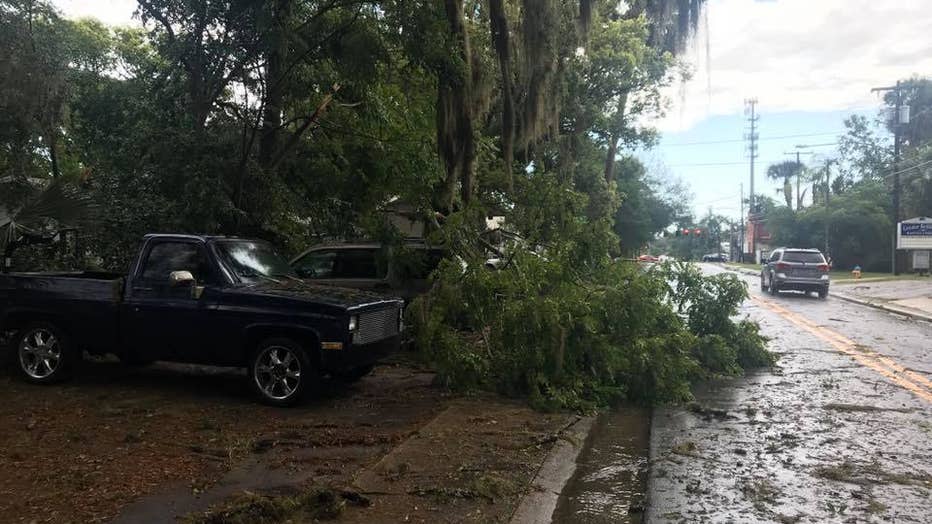