ORLANDO, Fla. - There’s activity in the tropics but Florida is safe for now.

Nonetheless, the FOX 35 Storm Team breaks down what activity is out there.

The National Hurricane Center (NHC) said Hurricane Sam remains over the Atlantic. It is packing maximum sustained winds of 105 mph, making it a Category 2 storm.

Forecasters said Sam slightly restrengthened over the Gulf and is expected to become post-tropical by early Tuesday.

Although Sam is not expected to have a direct impact on Florida, the system is pumping some ocean swells into our beaches.

"If you're heading to the beaches today, the rip current risk on the Atlantic side remains quite high as three to six feet breakers make it ashore," FOX 35 Storm Team Meteorologist Brooks Garner said. "Swim only in guarded areas and if you're not comfortable swimming in ocean water over your head among large, breaking waves, don't venture in above your waist. The Gulf side will be calm like a lake, so if you're looking to take your family to the beach, that might be your safest option."

Tropical Depression Victor is located thousands of miles west of the Cabo Verde Islands. It is moving towards the northwest with maximum sustained winds near 35 mph. It is expected to become a remnant low and then dissipate by Tuesday.

Meanwhile, forecasters said that they are watching a large area of disorganized cloudiness and showers over the southeastern Bahamas and adjacent southwestern Atlantic waters that is associated with a surface trough.

Upper-level winds are expected to be only marginally conducive and any development of the system should be slow to occur while moving west-northwestward. Formation chances are at 20% over the next five days.

"A disorganized area of showers and storms near the southern Bahamas has an outside chance to develop into a tropical depression before the week is out," Garner said. "Moisture associated with this feature will likely spread across Florida Thursday through Saturday." 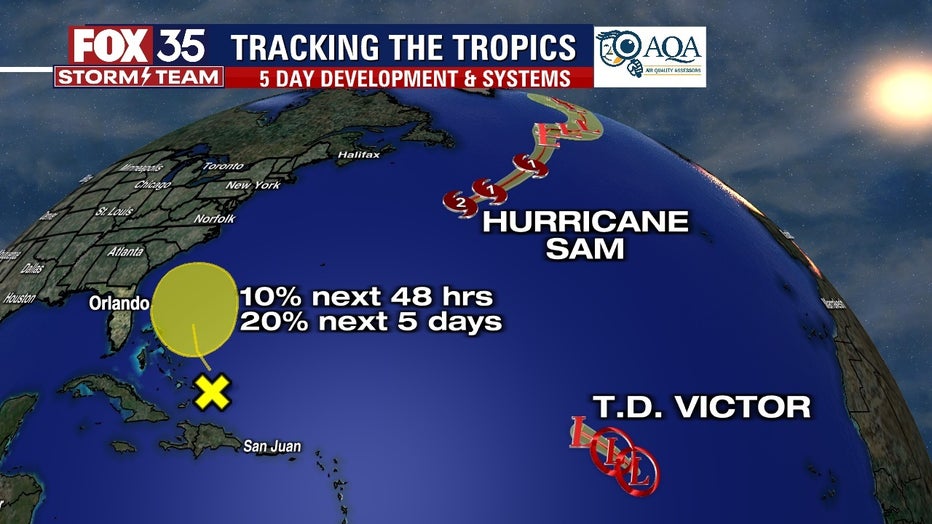