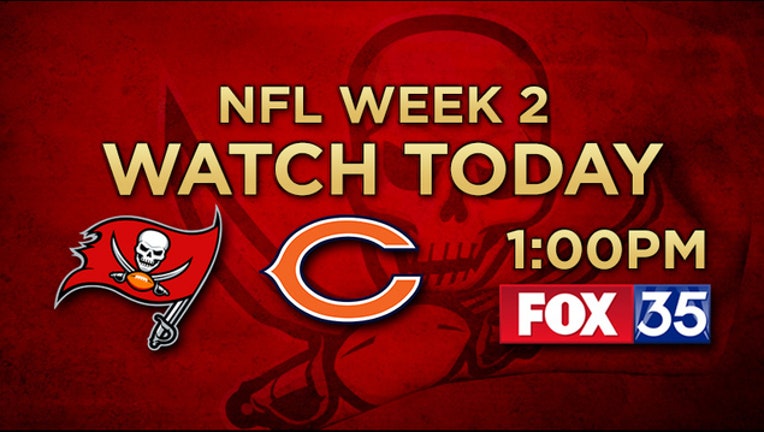 TAMPA, Fla. (AP) - Jameis Winston concedes it felt a little strange watching the rest of the NFL begin the season while the Tampa Bay Buccaneers were scattered around the country for an unscheduled bye imposed by Hurricane Irma.

When the young quarterback finally takes the field Sunday in the team's delayed opener, Winston will not have taken a snap in a game in three weeks.

Other key players, including receivers DeSean Jackson and Mike Evans, defensive tackle Gerald McCoy and linebacker Kwon Alexander, will line up against the Chicago Bears without having played since Aug. 17.

"I went through a tough time watching, but I really wasn't thinking about myself," Winston, who left town to wait out the storm with family in Alabama, said.

"Obviously I want to be out there on the field, and I definitely wanted to be playing, but sometimes you've got to take that back seat and let things happen."

Well, it's time to play.

And rusty or not, the Bucs say they have no excuse to not play well against the Bears (0-1), who dropped their debut with Winston's former backup, Mike Glennon, at quarterback 23-17 to the defending NFC champion Atlanta Falcons.

Tampa Bay's scheduled opener at Miami was moved to Nov. 19, meaning the Bucs will play 16 consecutive weeks to close the regular season.

"At the end of the day, nobody really cares about us playing 16 games or our starters not playing (preseason) games," Winston said. "Our job is to come in here and play football, and that's all."

Some things to know about the Bears and Buccaneers:

HEIGHTENED EXPECTATIONS: The Bucs haven't made the playoffs since 2007, but are coming off a 9-7 record in Winston's second season. The young quarterback has thrown for more than 4,000 yards each of the past two years and is the fifth player in NFL history to toss 50-plus touchdown passes through his two seasons.

WELCOME BACK: Glennon finally gets a chance to play again in Tampa Bay, something he rarely did behind Winston the past two years.

Glennon signed with the Bears after four years and 21 games with the Bucs, replacing Jay Cutler as the starting QB. He has another highly touted prospect behind him in No. 2 overall draft pick Mitchell Trubisky.

But for now, the starting job is his.

Glennon threw for 213 yards and a touchdown in a 23-17 loss to Atlanta last week. All but 50 of those yards came in the fourth quarter, however the Bears failed to score on four tries from the Falcons 5-yard line near the end of the game.

"I'm excited for him. I am happy that he gets to come to Tampa and play," Winston said. "Hopefully he does well, but not well enough to beat us."

CATCHING UP: Already thin at receiver, the Bears took another big hit with Kevin White going on injured reserve for the third time in as many seasons this week.

It's fair to wonder if White will ever develop into a productive player let alone a star after he broke his shoulder in the fourth quarter against Atlanta. The Bears were banking on big things when they drafted him seventh overall in 2015 and made him their first pick under general manager Ryan Pace.

But leg injuries limited him to four games through his first two seasons. Now, the shoulder is injured.

The Bears had already lost last season's leading receiver Cameron Meredith to a torn ACL in his left knee in the preseason. With White out, the Bears promoted Tanner Gentry from the practice squad.

Chicago is also down a key player on defense with linebacker Jerrell Freeman going on injured reserve this week. He suffered a torn pectoral muscle against Atlanta.

FILLING IN: With RB Doug Martin out until the fourth game while serving the remainder of a suspension for violating the league's policy on performance-enhancing drugs, Tampa Bay figures to spread carries among Jacquizz Rodgers, Charles Sims and Peyton Barber.

FOLLOWING UP: Chicago's Tarik Cohen figures he won't be catching the Bucs off guard. Not after last week.

Cohen made quite an impression in his debut, with 66 yards rushing and 47 receiving. He reversed field on a 46-yard run and had a 19-yard touchdown catch.