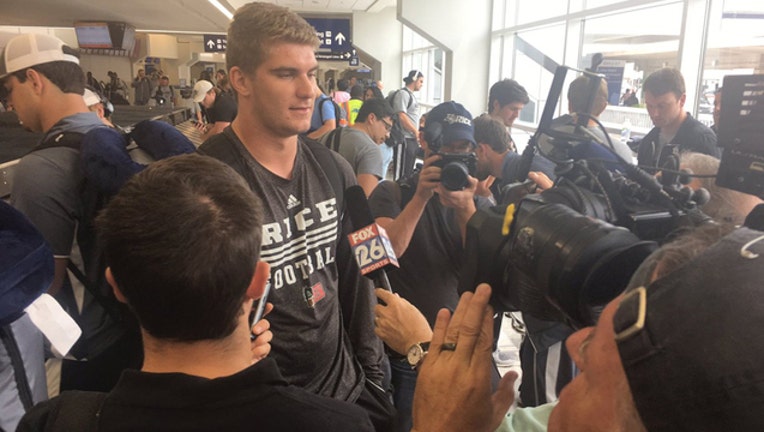 The Rice football team is relocating to TCU as flooding continues to inundate Houston in the wake of Hurricane Harvey.

The Owls opened the season over the weekend in Australia, where they lost to Stanford. They arrived in Los Angeles on Monday morning. They arrived in Dallas on Monday afternoon and will temporarily set up headquarters at TCU in Fort Worth until things improve in Houston.

Coach David Bailiff says: "While we would love to be coming home today, our first responsibility is the safety of these players.  We learned some lessons in 2008 (during Hurricane Ike) about coming home too soon."

The Owls have a week off before traveling to play UTEP on Sept. 9.

Rice is the latest Houston sports team to have its plans altered because of the storm. The Texans have relocated to Dallas and are awaiting word on where their scheduled home preseason game against the Cowboys on Thursday will be played. The Astros are also in Dallas and will head to Tampa Bay to play the Rangers at Tropicana Field instead of at Houston’s Minute Maid Park.

TCU coach Gary Patterson says the Horned Frogs will do whatever they can to help the displaced Rice Owls.

Patterson says there are still specifics to work out to host Rice on the Fort Worth campus while the Houston area deals with severe flooding from Hurricane Harvey. Patterson says the Owls are worried about loved ones, but also "all their belongings and their apartments, and their housing."