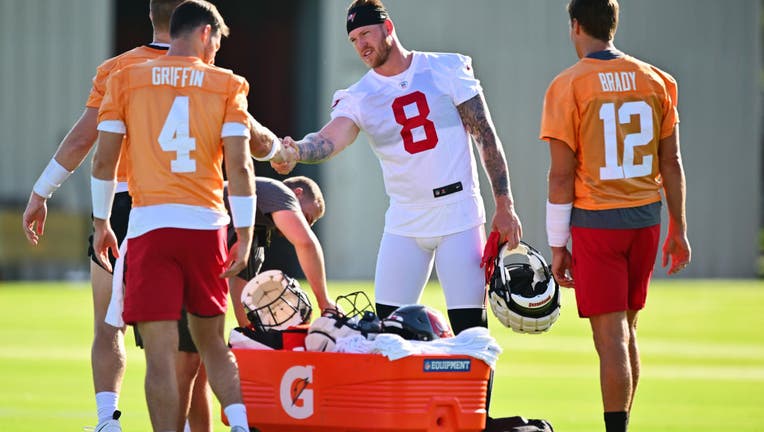 TAMPA, Fla. - Going into the off-season, the Tampa Bay Buccaneers thought they were going to be rebuilding without Tom Brady. However, he's back and so are most of the players, including a few new pieces, and they're ready to make another Super Bowl run.

Rob Gronkowksi, one of the most productive offensive players the past two seasons, is gone, but Brady still has plenty of weapons.  Recent Bucs signee and veteran tight end, Kyle Rudolph is expected to fill Gronk's role.

"It’s a ton of fun. It’s kind of invigorating for my career. Here I am in year 12 and yet I still feel like I’m learning something new every day. It’s a great opportunity to take my career to a place it’s never been before," Rudolph told reporters on Wednesday.

Also, the Bucs officially signed Julio Jones to a one-year deal on Wednesday. The seven-time pro-bowler is now part of a receiving corp that includes Mike Evans, Chris Godwin, and newcomer Russel Gage. Jones was plagued with injuries during his lone season in Tennessee. But right now, he says he's 100 percent healthy.

"You got Julio with the Bucs, we got Mike, we got Tom Brady. But we all got to put the work in. Nobody’s going to give us anything. So we just got to come out here and work each and every day," Jones said.

The Bucs want to compete for a Super Bowl title at the end of the season. They know the work starts during training camp.

"The attitude’s been great. We got a lot of leaders in that locker room, coaches as well," Bucs head coach Todd Bowles said.

Kyle Rudolph was a full participant at practice.  However, Julio Jones arrived in Tampa last night and got to the facility on Wednesday. He says he still has to undergo a physical before he can practice. He should be on the field soon.