The first reported human case of the West Nile Virus in the state this year has been confirmed in Central Florida and health officials have heightened concerns that others may become sick.

VOLUSIA COUNTY, Fla. - The first reported human case of the West Nile Virus in the state this year has been confirmed in Central Florida and health officials have heightened concerns that others may become sick.

The Florida Department of Health (FDOH) said there is an increase in the mosquito-borne disease activity in Volusia County. Mosquito Control will have four ultra-low volume, or ULV trucks that spray pesticides to kill mosquitoes operating in DeLand, Orange City, Cassadaga and Samsula after sunset Thursday. (See a map showing treatment areas here.) 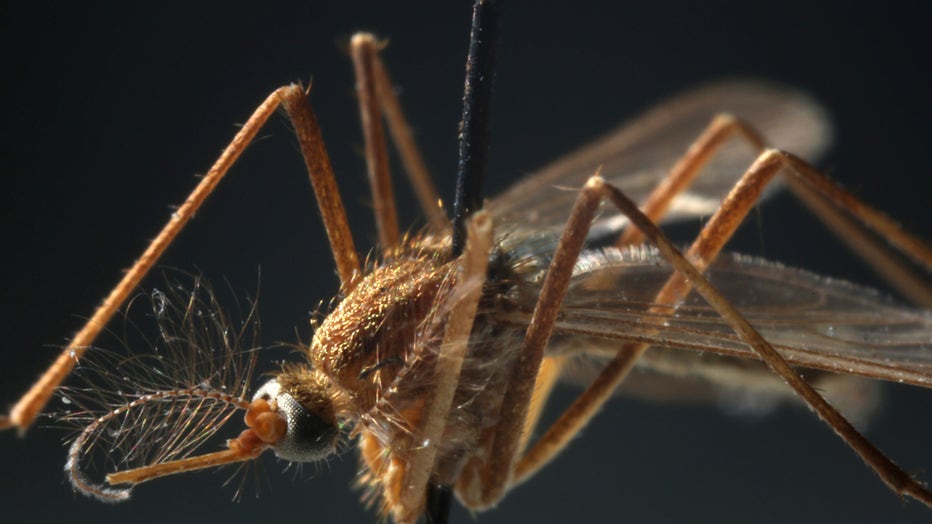 A Culex pipien mosquito specimen in the insect collection at the Field Museum shows the type of mosquito that carries the West Nile virus. (E. Jason Wambsgans/Chicago Tribune/Tribune News Service via Getty Images)

The peak period of transmission in Florida is typically July through September, but officials said mosquito-borne diseases can also be transmitted throughout the fall.

How is the West Nile Virus transmitted?

The virus is reportedly transmitted to wild birds by Culex mosquitoes and causes disease in humans who are bitten by an infected mosquito.

Officials said most people do not develop any symptoms, however, one in five people may experience:

Who is at greater risk for the West Nile Virus?

Anyone of any age can experience severe illness, but people 60 years of age or older are at greater risk, according to the health department. Those with certain medical conditions, such as cancer, diabetes, hypertension, kidney disease, and people who have received organ transplants, are also at greater risk, according to the Centers for Disease Control and Prevention.

Is the West Nile Virus deadly?

The CDC said about 1 out of 10 people who develop severe illness affecting the central nervous system die.

Health officials said there is no vaccine or medication available to treat a West Nile virus infection, but over-the-counter pain reliever can alleviate symptoms.

The FDOH said people should avoid being bitten by mosquitoes by taking precautions to limit exposure such as: draining standing water to stop mosquitoes from multiplying, applying insect repellant (preferably DEET) on skin or cover skin with clothing, and cover doors and windows with screens to keep mosquitoes out of houses.